The third USA Pro Cycling Challenge drew to a close yesterday in downtown Denver in front of big crowds to see Tejay van Garderen take the GC title and Peter Sagan another stage victory. Once again ace photographer Darrell Parks was there to capture all the best images for PEZ.

Denver (Aug. 25, 2013) – The 2013 USA Pro Challenge came to an exciting conclusion today, as 2013 Tour de France Sprint Champion Peter Sagan (SVK) of Cannondale Pro Cycling took the stage to the roaring cheers of fans lining the route in Downtown Denver (his fourth stage win of the race). And with an overall time of 22 hours 38 minutes and 48 seconds, Tejay van Garderen (USA) of BMC Racing Team took home the overall win.

“I felt like this was a long time coming. I’ve been so close to winning before,” said van Garderen. “Races are difficult to be motivated for after July, but with this race on the calendar, it wasn’t a question on if I was going to stay motivated at all. This is my hometown race, so I wanted it bad. It feels amazing to finally get this win.” 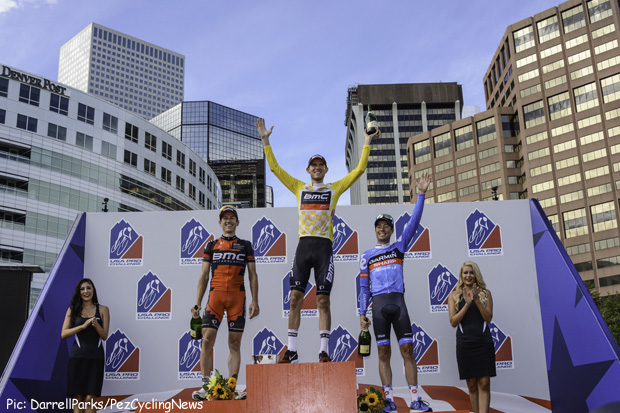 After a tough week of racing over mountains at high altitudes, the riders tackled their first flat stage of the race in Denver. Borrowing from the 2011 route for the ever-popular Denver circuit finish, Stage 7 included eight laps that would showcase LoDo, City Park, Civic Center Park and all the other highlights of downtown. 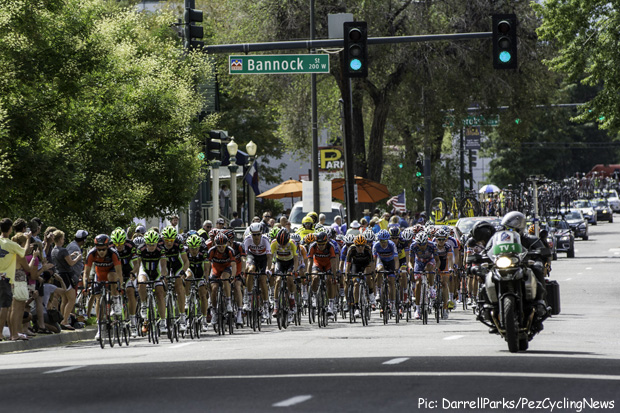 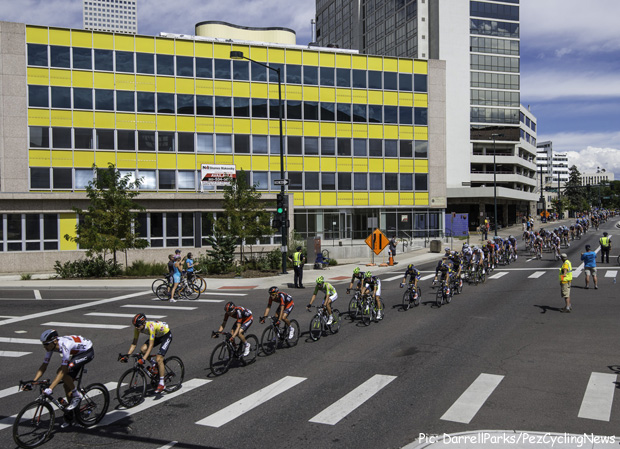 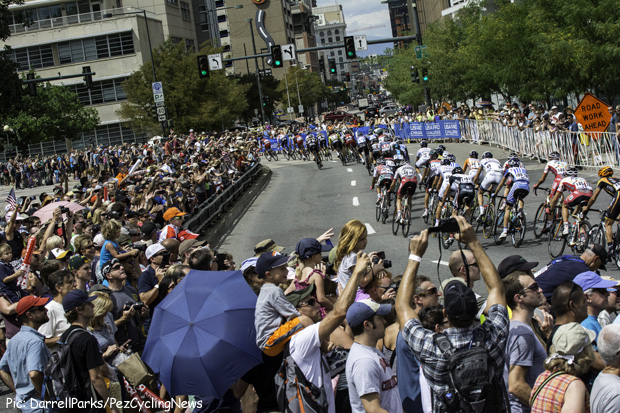 Big crowds gathered in Denver for the last stage.

Giving fans a chance to see the riders nine times and the riders plenty of opportunities to familiarize themselves with the course, the stage brought another exciting finish to seven days of fiercely competitive racing.

“The 2013 USA Pro Challenge was our best edition ever and we’ve learned more and more each year,” said Shawn Hunter, CEO of the USA Pro Challenge. “These athletes gave us a great show over the course of the last seven days. Fans from the start in Aspen to the finish in Denver witnessed the world’s best cyclists compete in the biggest race in America. The USA Pro Challenge is definitely coming back next year.” 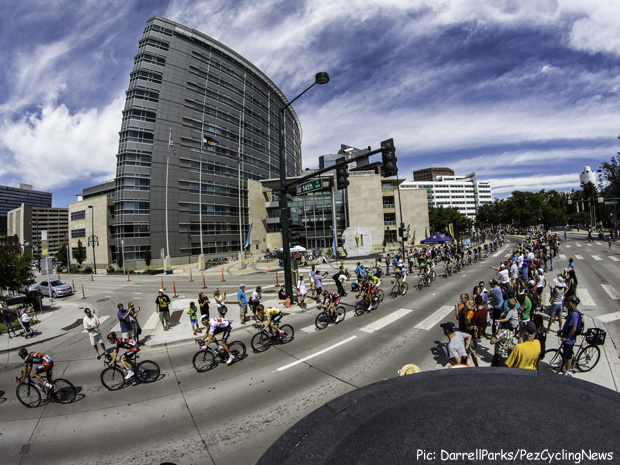 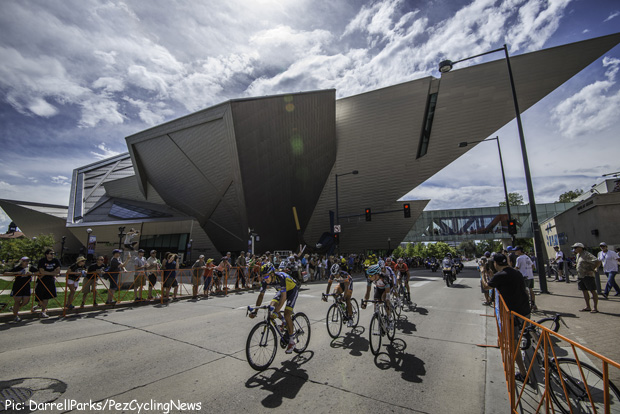 Under beautiful sunny skies, the race kicked off with a very short neutral section and then officially started at City Park. At only 72.4 miles on a fast, flat circuit, the race would keep a steady tempo for the entire stage. At only five minutes into the stage there was a four-man breakaway, with three chasers following behind. The two groups quickly merged to form a seven-man break that would stick for most of the race. The break included:Ben King (USA) of RadioShack Leopard Trek RadioShack, Christopher Juul Jensen (DEN) of Team Saxo-Tinkoff, Chun Kai Feng (TPE) of Champion System Pro Cycling Team, David Lozano Riba (ESP) of Team Novo Nordisk, Lucas Euser (USA) of UnitedHealthcare Pro Cycling Team, Tyler Wren (USA) of Jamis-Hagens Berman p/b Sutter Home & Carson Miller (USA) of Jamis-Hagens Berman p/b Sutter Home 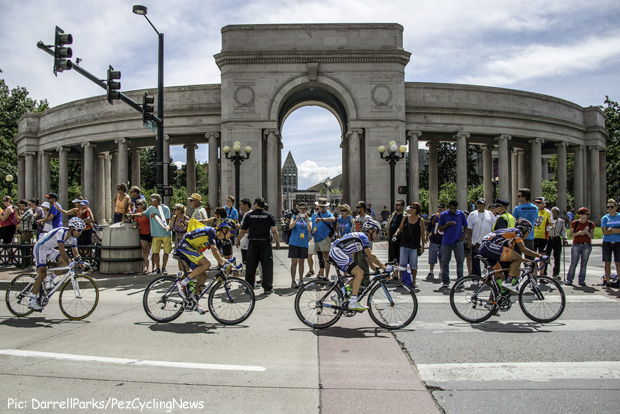 With fans lined along the entire circuit, the riders were motivated to put on a good show. Cannondale Pro Cycling led the chase in the field and the gap fluctuated between 50 seconds to one and a half minutes. With three intermediate springs included in the stage at 6, 4 and 2 laps to go, the speed continued to stay up, averaging around 45 mph. At the first Clif Bar Sprint, King crossed the line first, followed by Miller and Feng. With the breakaway maintaining its lead, Wren took the next Clif Bar Sprint competition, followed by Feng, then Juul Jensen. And for the last Sprint Bar competition of the race before the finish in Denver, it was Euser, followed by Feng and Miller.

With two laps to go, the race started to heat up, with the field turning on the gas to catch the breakaway. Sensing that the end was drawing near, Euser attacked the break and pulled away. 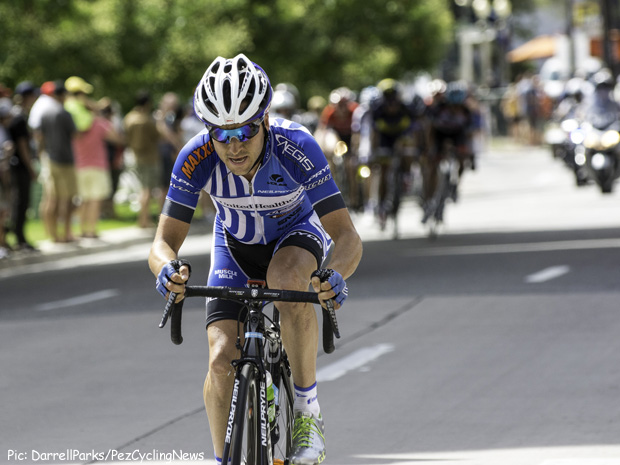 Miller and King caught up to create a new break of three in front of the splintering original group, but it wouldn’t be long before they were caught as well. 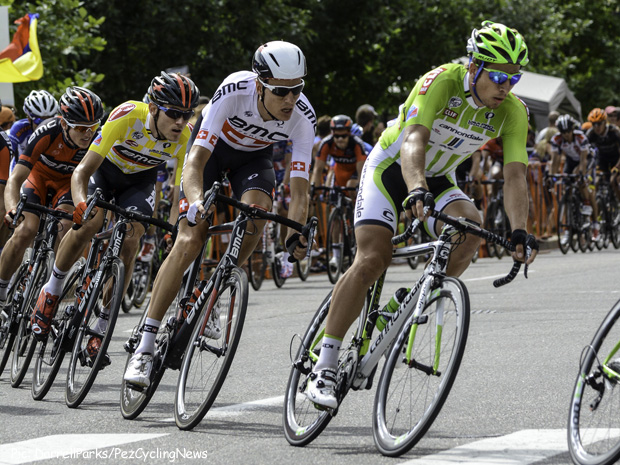 Peter Sagan was well positioned and protected in the peloton the whole stage.

Leading into the final lap, 2012 USA Pro Challenge Champion Christian Vande Velde (USA) of Team Garmin-Sharp was out front as the peloton started the last nine miles. All the teams got set up to put their sprinters in position for the final dash to the finish line, and ultimately it was Sagan who pulled out the win, his fourth of the race. He was followed by Ryan Anderson (CAN) of Optum Presented by Kelly Benefit Strategies who took second in the stage and Alessandro Bazzana (ITA) of UnitedHealthcare Pro Cycling Team who took third. 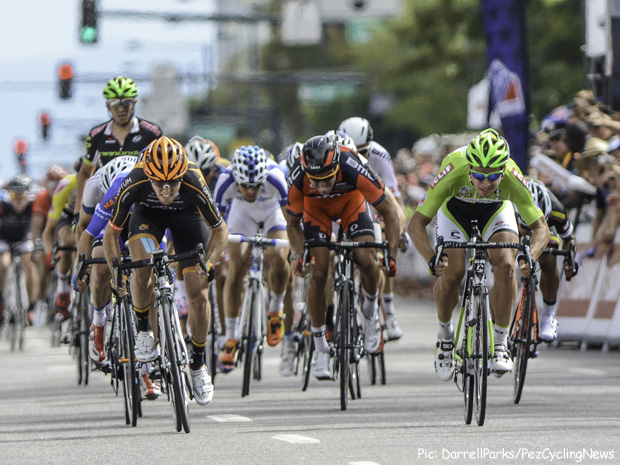 “The USA Pro Challenge has been a great addition for us. You always go in wanting to win,” said Danielson. “This was a strong course with stiff competition. I’m really happy and the team is really happy that we gave it our all and made the race. For me to finally stand on the podium in Denver was great.”

The 2013 USA Pro Challenge marked the final U.S. race for 2012 Champion Vande Velde, who finished in 22nd place today. Becoming a professional cyclist in 1998, Vande Velde has had a long and incredibly successful career.

“It was more emotional than I thought it would be, but I didn’t want to think about it too much,” said Vande Velde. “During the last lap, I just thought about so many things throughout my career up until this point. I’m really fortunate to have had this opportunity and to see three editions of this race. I’m glad I got to close it out here in Colorado.”

The final jerseys of the 2013 race were awarded this afternoon under blue skies in Downtown Denver. The Smashburger Leader Jersey went to van Garderen. Sagan kept his hold on the Clif Bar Sprint Jersey. Matt Cooke (USA) of Jamis-Hagens Berman p/b Sutter Homes hung on to the Nissan King of the Mountains Jersey (no points were awarded today). Lachlan David Morton (AUS) of Team Garmin-Sharp kept the Colorado State University Best Young Rider Jersey. And King was awarded the FirstBank Most Courageous Rider Jersey for his overall effort throughout the week. 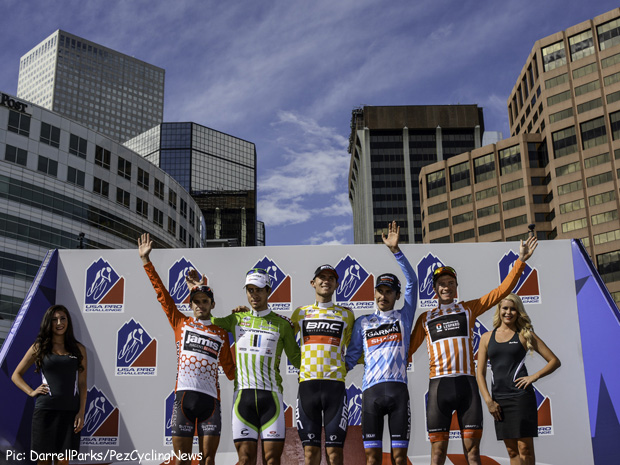