Stage 4 was billed as the Queen Stage and it didn’t disappoint with five KOMs on the way from Steamboat Springs to Beaver Creek. In the end, Janier Acevedo pulled out the stage win and Tejay van Garderen claimed the Leader’s Jersey on a very tough and sometimes rainy day in Colorado. Darrell Parks was there with his cameras for PEZ and here’s what he saw.

Beaver Creek, CO (Aug. 22, 2013) – The Queen Stage of the 2013 USA Pro Challenge presented the riders with a challenging day, starting in Beaver Creek, that included five climbs and ended in a downpour of rain. In a show of strength, Columbian climber Janier Alexis Acevedo of Jamis-Hagens Berman p/b Sutter Home powered up the road to Beaver Creek to take the stage win. Following just behind was Tejay van Garderen (USA) of BMC Racing Team who will now wear yellow heading into the Individual Time Trial tomorrow in Vail. “Today was one of the most exciting days of racing we’ve had so far,” said Shawn Hunter, CEO of the USA Pro Challenge. “The number of attacks out there and the competitive level of racing we’re seeing from these pros is definitely keeping things interesting.” 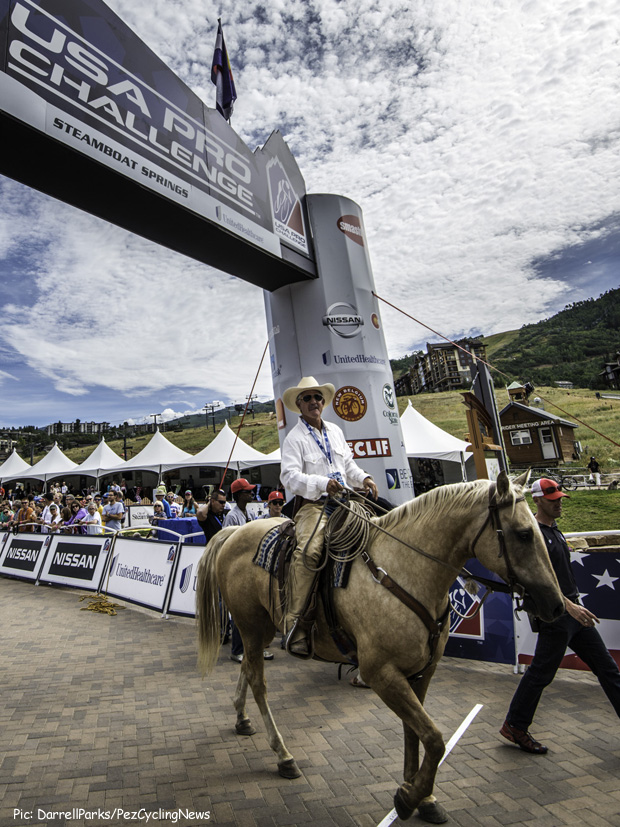 A cowboy on the startline…

Stage 4 began today in Steamboat Springs with a neutral start that was cheered on by large crowds of spectators lining the streets. “Colorado has really come out to support the USA Pro Challenge,” added Hunter. “Every city we visit and pass through along the route has fans out on the street cheering for the riders. It’s impressive.” The race kicked into high gear jumping to speeds of 40 mph at the official race start on the edge of town. As with the other days of the race thus far, attacks started coming from the get-go. 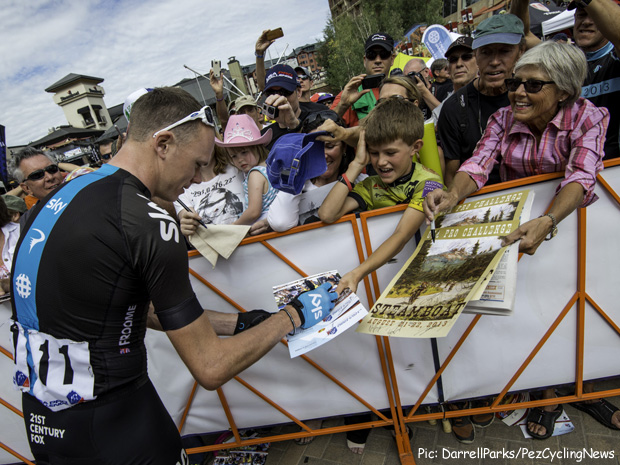 Chris Froome was playing it cool before the stage start but attacked soon after the flag dropped.

An initial attempt from Tour de France Champions Chris Froome (GBR) of Sky Procycling (2013) and Andy Schleck (LUX) of RadioShack Leopard Trek (2010) was unsuccessful and was reeled back in within a few minutes. Shortly after, a group of nine riders pulled away. As some were dropped and others joined, the group got situated to include Timmy Duggan (USA) and Mick Rogers (AUS) of Team Saxo-Tinkoff, Danny Pate and (USA) Kanstantsin Siutsou (BLR) of Sky Procycling, Tony Gallopin (FRA) of RadioShack Leopard Trek, Lawrence Warbasse (USA) of BMC Racing Team, Davide Villella (ITA) of Cannondale Pro Cycling, Matt Cooke (USA) of Jamis-Hagens Berman p/b Sutter Home, and Serghei Tvetcov (MDA) of Jelly Belly p/b Kenda. With about six miles until the first Nissan King of the Mountains (KOM) competition of the day, Jason McCartney (USA) of Bissell Pro Cycling made a move to bridge the gap up to the break, but wouldn’t be able to make the catch until later in the race. 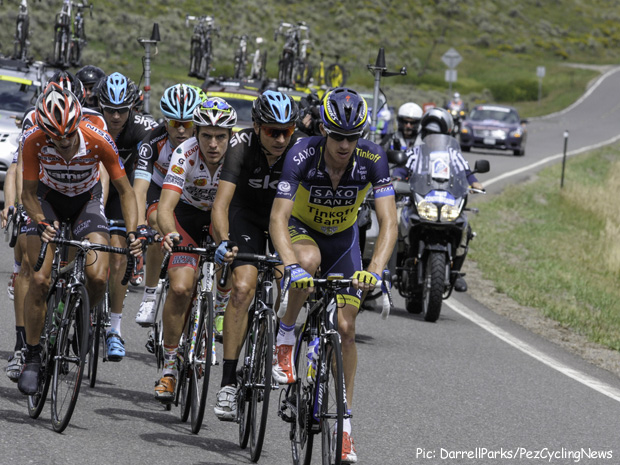 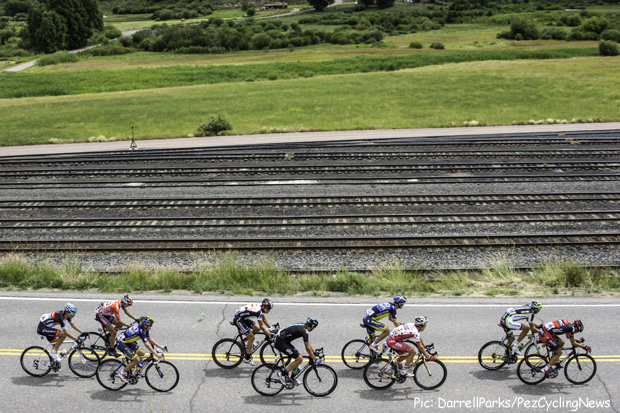 Heading up the Category 4 climb at CR 27, Cooke led the way, reaching the top first and adding to his lead in the KOM Jersey competition, followed by Villella and Duggan. Charging at high speeds down into the small town of Oak Creek, the break approached the first and only Clif Bar sprint of the day. Siutsou barreled through the line first, followed by Warbasse and Duggan. Heading uphill and through the Feed Zone, the riders started the ascent of the second Nissan KOM competition, a Category 4 climb at CO 131. Cooke reached the top first in an uncontested effort to increase his hold on the KOM Jersey, followed by Pate and Tvetcov. During the descent, the break started losing time to the chasing peloton, reaching just under three minutes as they hit the valley floor. But as the peloton got closer to the top of the KOM, the gap increased again. Sensing the fate of the break, Siutsou seized the moment and attacked. He was joined by Gallopin, Warbasse, Rogers and Villella. 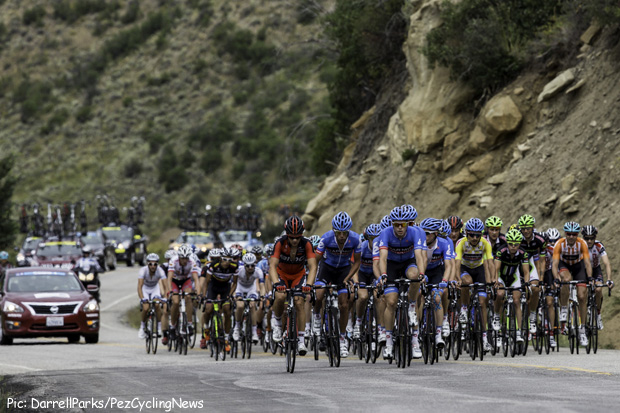 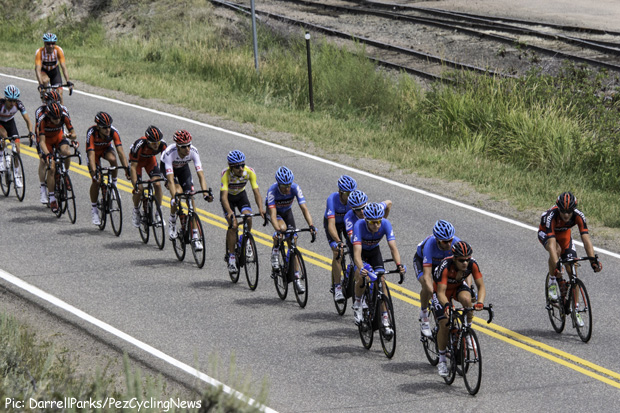 Garmin & BMC kept the break in check all day.

As they continued approaching the third Nissan KOM competition of the day, again a Category 4 at CO131, Pate and McCartney were reabsorbed by the Garmin-led peloton. This time Gallopin crested the climb first, followed by Siutsou and Rogers. On the 15-mile stretch through the valley leading into the biggest climb of the stage at Bachelor Gulch, Duggan lost contact with the chase, leaving just Tvetcov and Cooke in pursuit of the five ahead, but before long they were caught as well. With just about 25 miles left to the uphill finish line in Beaver Creek, the peloton starting pushing the pace, with various teams jumping to the front in an effort to eventually reel back in the break. On a false flat leading into the fourth Nissan KOM competition of the day, Team Garmin-Sharp and BMC Racing Team controlled the front of the peloton, with lots of shuffling going on in the bunch as everyone got into position. The tough climb up Bachelor Gulch really affected the riders, splitting them up into several groups, shattering the field. On the ascent, Rogers attacked the break, followed by Warbasse, leaving Gallopin and Villella chasing behind, and Siutsou falling back to the main group. But in the final three miles of the climb, Warbasse lost contact as well. 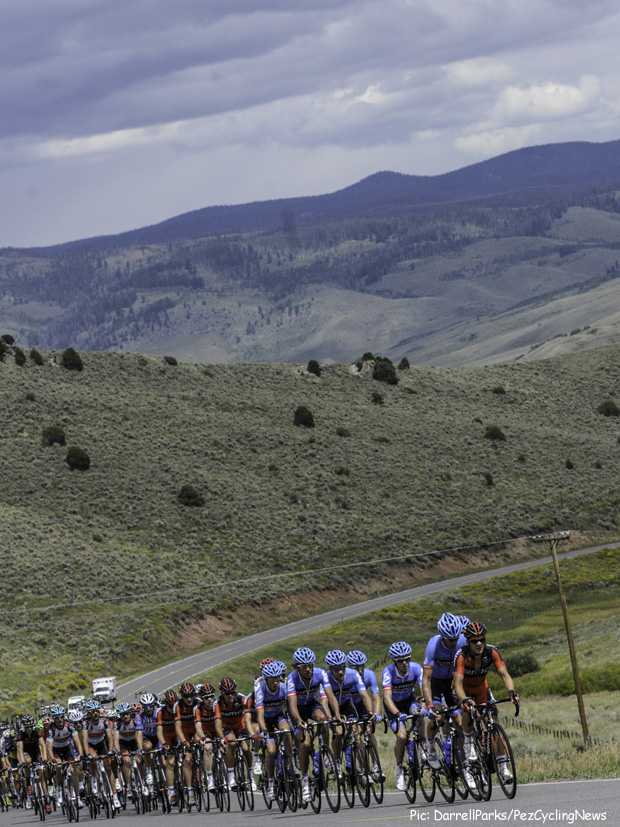 The climb continued to break apart the riders leaving Rogers out front, followed by three chasers, then eight additional riders, followed by the peloton, and then the grupetto trying to hang on. As things continued to shake up, Mathias Frank (SUI) of BMC Racing Team, van Garderen, Tom Danielson (USA) of Team Garmin-Sharp and Acevedo, formed the group chasing down Rogers, which eventually they did and then proceeded to drop him on the climb. “That thing (Bachelor Gultch) is incredible,” said Cooke. “I’m just impressed that anyone can ride up that pretty fast. It was steep and one heck of a course.”

Powering over the top, Danielson led, with van Garderen and Acevedo following. Now, with just more than seven miles to go until the finish in Beaver Creek, the pressure was building. On the descent, Acevedo attacked and was challenged by van Garderen, leaving Danielson, and eventually Frank, chasing just a few seconds back. Behind them a group of eight, including race leader Lachlan David Morton (AUS) of Team Garmin-Sharp was keeping pace at only about 30 seconds back. “The biggest challenge was the bottom of Bachelor Gulch. It was an insanely hard tempo,” said van Garderen. As the rain began to pound down on the riders, van Garderen and Acevedo powered through the final climb, lined with eagerly awaiting fans, to the finish line in Beaver Creek. 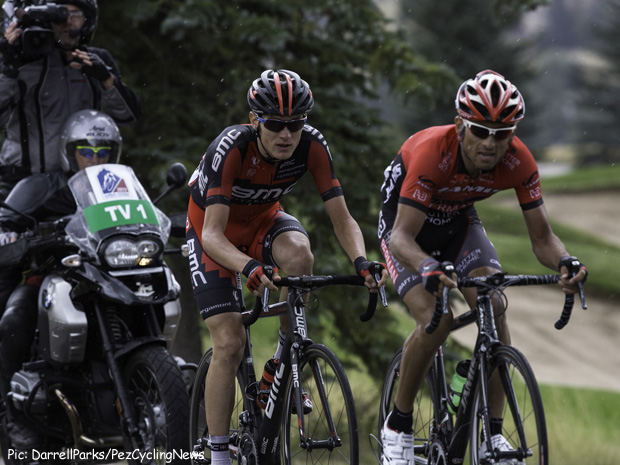 Acevedo eventually took the stage, followed by van Garderen and 13 seconds later, Frank. “I felt very good and confident,” said Acevedo. “I had to go as easy as I could going downhill, taking as little risk possible going around corners. I had a tremendous day today and I felt good about it. For me to win today is just amazing.” 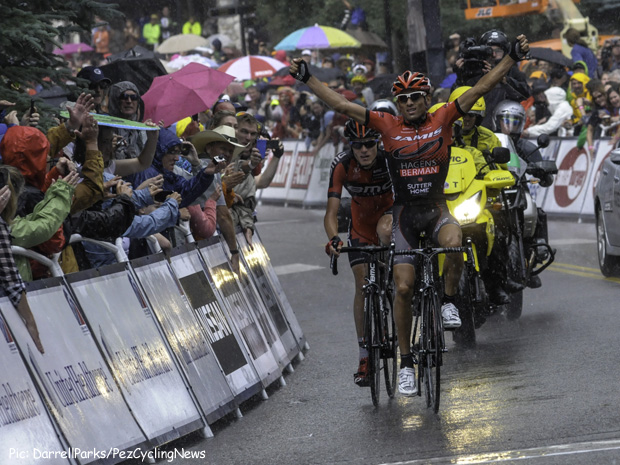 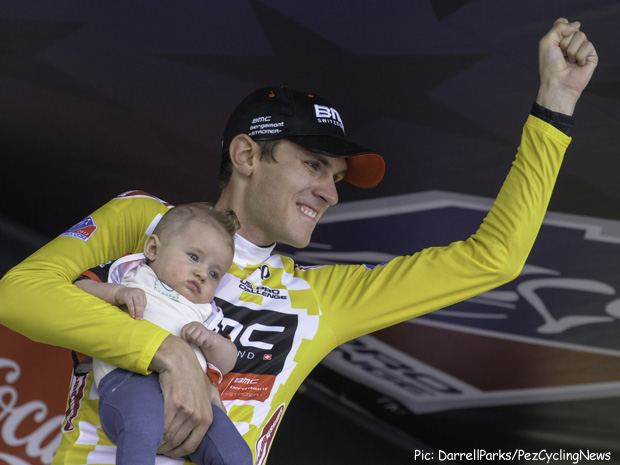 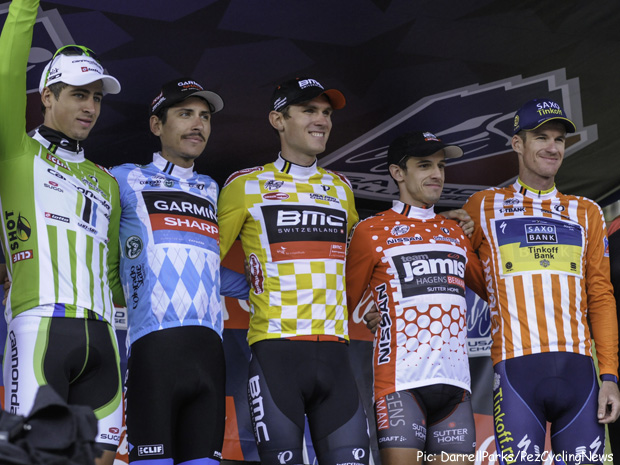