Team Telekom’s Alexandre Vinokourov powered away from some of the biggest names in cycling near the end of today’s 250km Amstel Gold Race, to take his first World Cup win. 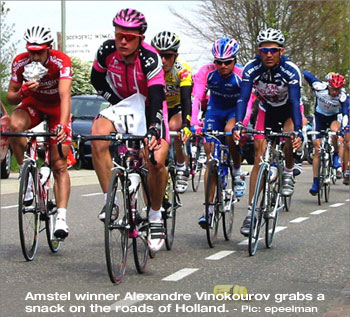 The super-group, which contained Lance Armstrong, Francesco Casagrande, Michael Boogerd, Vicioso Arcos, Astarloa Askasibar, Matthias Kessler, Davide Rebellin, Michele Bartoli, Vinokourov, Mirko Celestino, and Danilo Di Luca, got away from the rest of the bunch with around 12 km to go, the result of several riders including Francesco Casagrande, Matthias Kessler, and Michele Bartoli all making thier own bids to get away. Casagrande seemed most inspired as he attacked time after time, but in the end it was Vinokourov’s strength on the final climb of the Cauberg that was uncatchable.

This report was filed by Eugeen Peelman, who was at the race for PezCycling News.

This morning at 10.15 am, 194 riders started in Maastricht for a tour of 251 kilometers. It’s a nice and sunny day. The first rider that attacked was Paul Van Hifte but it was no success.
After 30 kms, Van Hifte tries again and with 7 other riders he became the head pack. At 95 kms, they have 2’15” before the main pack.
– 141 km : they have 1’30” before but Van Hifte has to leave the head pack.
– 191 km, head and mean pack come together.
– 196 km : a new attack of 3 riders (Baschi, Sacchi and Smithz)
– 217 km : the race breaks open with Lance Armstrong, Boogerd, Casagrande, Di Luca. Casagrande attacks and drives a while all alone before the others.
Boogerd brings the head and main pack together but a few minutes later there’s a new attack from Casagrande.

On the Keuterberg (22 % up) we see a very strong Michael Boogerd, but on the top he was surprised by an attack from Vinokourov.
Vinokourov starts the climb of the Cauberg with 37 seconds before the head pack and he finished with a few seconds before Boogerd and Di Lucca.

After the race I saw some very bad behaviour by the police. Two of Vinokourov’s “helpers” wanted to help Vinokourov with his bike, etc… but the police pushed them away and Vinokourov hit the police. I was so surprised that I couldn’t take a picture of it …!

The world champ leader Van Peteghem was very tired and wasn’t seen in the race at a good place, but he’s still the leader of the World Cup.

It was the one and only world cup race in Holland and I think everyone in Holland wasthere, thousands of people were on the route and there was a lot of ambiance, music, fun, etc….

See you next week in the Liиge-Bastogne-Liиge!