Dauphine Stage 6: You can teach a rider how to train, when and where to go hard, when to pull back, provide nutritional advice, the best equipment, time in the wind tunnel to perfect position and pedaling efficiency. But there is one element that cannot be taught – how to win.

Race Comment: You can teach a rider how to train, when and where to go hard, when to pull back. You can educate a rider in how best to recover, when to take breaks from the schedule, when to ramp it up. When to get a massage, when to refuse. Every top level team provides nutritional advice, the best equipment, time in the wind tunnel to perfect position and to improve pedaling efficiency. All of this of course is supplementary to the personal knowledge that each individual rider has accumulated over the years, first as a junior, later as an U23 rider, and then as an emerging professional.

It’s a jigsaw puzzle, in effect, trying to get all the pieces on the board before you even start to really crank it, before the fuller image appears, before the rider becomes a man, a machine equipped with the necessary components to be ready to function at the highest possible level. 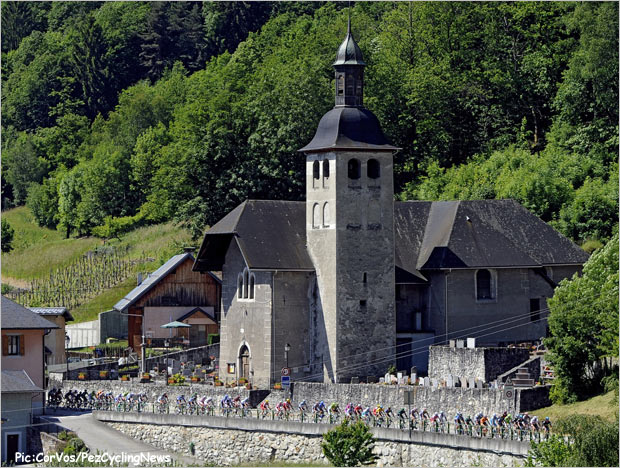 Another fine and scenic day for bike racing in France.

But despite all this, there is one final element that cannot be taught – how to win.

It’s the last piece of said puzzle, the final, most gigantic of the redwoods in the forest, the summit of the mountain, and it’s what so many riders desperately want to acquire, if they even realize they are lacking it in the first place.

Tactics can be drawn out on a board, wise old hands can have a word in the ear, videos of successful cyclists can be devoured, but the guy out there in the break on the bike has to put it all together. Has to make the connections. Join the dots. Make it work.

Of course, all the guys in today’s sixth stage of the Criterium du Dauphine have won. Even the so-called ‘lowliest’ domestique was more than likely a star in their home town in their younger years, racking up victories left, right and center.

Yet to produce the same from within the pro peloton, jam-packed as it is with the best guys in the world, that takes something else. It’s a combination of experience, skill, talent and, crucially, self-belief, and the ephemeral je ne sais quoi – all of which was shown in spades earlier today by Europcar’s wiley performer, Thomas Voeckler, as he cracked the break and roared to the line with arms raised above his head. 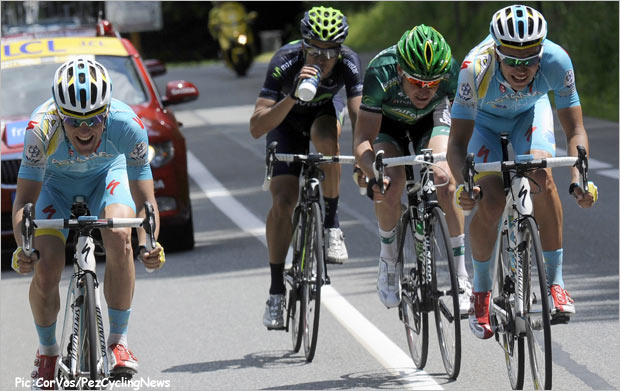 Voeckler keeping his eye on the rivals, and saving his strength.

Voeckler was away in an 8-man break, doing his share here and there, moving things along, then as the Astana pair put the metal down and whittled the group down to 4 (forced in part to do so due to their numerical superiority and no doubt from some shouting from the team car into their respective heads), Voeckler stepped in. He went to the front and drove hard, knowing that winning from 4 is, of course, easier than winning from 8.

With the gap to the peloton not coming down fast enough, the race proper began.

The adrenalin’s pumped up a notch or 50 in the riders’ systems. The central cortex gets flooded, like flash-flood flooded. Binary code just about emerges through the fug of pain, fatigue drops away like the heavy cloak it is, every detail becomes sharper, every edge refined. Minds turn in an instant from survival to the finish line. To the final kilometers. And how long it can seem to take to come, how tortuous the process of deciphering the others’ condition, of evaluating one’s own form.

After the stage Voeckler said he kept an eye on the two Astana guys but was worried a little by the Movistar rider, “because I didn’t know too much about him.”

That was telling. He’d already sized up the Astana pair, who by being a pair had the upper hand, on paper, as the race neared its conclusion. One Astana rider attacks, the others must follow, then Astana rider #2 goes. Textbook. Only, there is a Voeckler in the mix. A proven winner. He knows he can take them. You could almost feel the fear that riddled the others’ thoughts, emanating through the screen, feel the self-doubt, the sheer worry of having ‘that guy’ there. 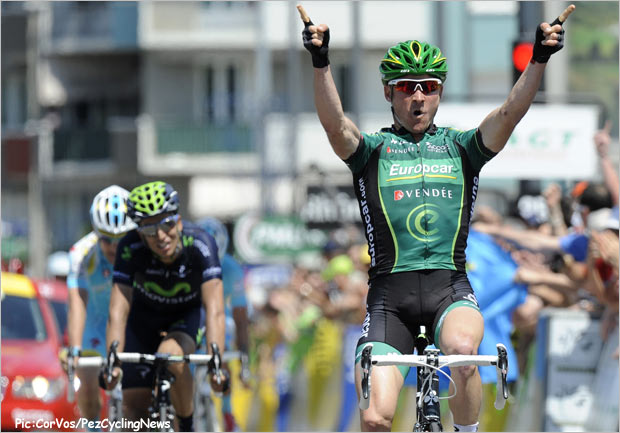 And there is the Frenchman, abiding like The Dude. Crouching, almost reclining, waiting, counting the moments, watching the wheels, sensing the meters, feeling the wind. Knowing that it is not, for him, a case of realizing a destiny but of making it happen himself, of repeating the process of winning.

Now that’s the difference. The habit, once it comes, is almost impossible to lose. You might lose form, which means you no longer win so much, but that instinct gets hard-wired in. Some mistake it as cockiness – Mark Cavendish’s innumerable detractors are evidence of that – but it’s not as simple as that. It’s a complex mix of guile, power, self-knowledge, experience, charisma on the bike, balls and, finally, that which you cannot put a name on.

The stuff that floats in the ether that winners seem to have at their fingertips.

It was boys against a man today. He took it, and you knew he would, even though of course, until the final 100, you really didn’t. But you did…

Kids and Fans Become Stars in the Tour de Pologne