In a race up the famous ‘Wall’ of the Valdepeñas de Jaén it came down to a gap of 8 seconds that would separate the contenders for the Red Leader’s Jersey. Dani Moreno (Katusha) made the perfect attack with one kilometer to go and we watched Nicolas Roche (Saxo-Tinkoff) use everything in his power to limit the gap only to miss out by one second. Moreno is the toast of Spain tonight but he couldn’t have done it without Joaquim Rodríguez, his team leader who was instrumental in getting the gap.

In the final Grand Tour of the season it’s been a long and tiring week since the riders rolled off the glass start ramp in Galicia and by rights they could reasonably expect a bit of rest tomorrow. But this is the Vuelta and it has its own unique identity which sets it apart from the Tour and the Giro so there’s no Monday rest day – the riders instead get a third mountainous day in the south of Spain tomorrow before the longest transfer of the race to Tarazona for the individual time trial.

Today the race heads out from Antequera, a city located at the heart of Andalucía and heads north before turning to the east and tackling the renowned ramps of the Valdepeñas de Jaén which can often be between 20% and 30%. It’s a lumpy 163.7km course that could favor a breakaway for most of the day but they’re unlikely to survive until the end as the famous ‘Wall’ is built for lightweight climbing specialists. This is where we should see the men with true overall ambitions stepping up to the plate, or showing that they don’t have it. Expect to see fireworks from the likes of Rodríguez, Valverde and Nibali.

Another Day, Another Breakaway
The day’s break started from Kilometer 1 with Johnny Hoogerland (Vacansoleil-DCM) and Luke Rowe (Sky) moving up the road. They were quickly joined by three others; Lloyd Mondory (AG2R-La Mondiale), Anthony Roux (FDJ) and, no surprise here, Francisco Aramendia (Caja Rural). The Spanish rider has more ‘breakaway’ kilometers under his tires in this Vuelta than any other rider and other team managers will surely be taking note. 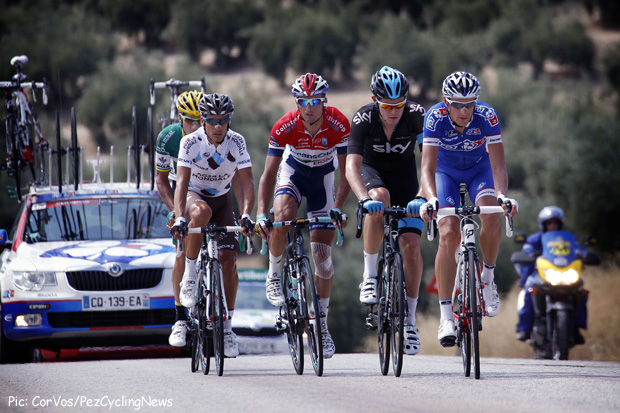 The break moved away steadily and pushed their advantage out to 6:34 before BMC started taking an interest back in the bunch. They reduced the deficit by a minute and were then joined by Katusha who appeared to have a ‘double-header’ objective for today. Joaquim Rodríguez was looking to repeat his victory in Valdepeñas of two years ago but the team also wanted to put Dani Moreno into Red as he is only 17 seconds behind Nico Roche (Saxo-Tinkoff) and is the kind of rider who could easily take that time back on today’s finish.

With the work being done by BMC and Katusha by the time the leaders reached Lucena after 50km of racing, the gap had come down to 4 minutes and, confident in their abilities to contain the leaders, the peloton eased a little and kept the group at between 4 and 5 minutes.

Another rider looking for a high place finish today will be that other ‘old man’ of cycling, Chris Horner (RadioShack). We saw yesterday how his whole team was prepared to put in the work and Horner himself was climbing well. The main GC guys all noted that Nibali (Astana) appeared to be ‘gapped’ on the run up to the finish and this may have given them an added impetus to attack him later on in the race. Nibali himself didn’t seem too concerned as he believes that Rodríguez and Valverde (Movistar) are targeting each other in this race and that his main challenge may eventually come from a resurgent Basso (Cannondale).

Road Rises
With just over 50km left to race, the leaders turned onto the mountain road that would take them in to the hillier section of today’s stage. Having kept the break pegged at between 4 and 5 minutes the peloton stepped up its pace and we saw three teams riding on the front, BMC and Katusha having been joined by Lotto-Belisol. The day’s first Intermediate Sprint at Castillo de Locubín saw Anthony Roux cross ahead of Johnny Hoogerland and Francisco Aramendia but despite continued effort on their part the gap was coming down dramatically now. With 40km of the stage remaining the leaders only had 70 seconds over the bunch and it wouldn’t be long before the real racing kicked off.

With the race now on narrower roads, everybody in the peloton was being more vigilant as it would be harder to move up and if a crash happened it would inevitably create gaps. This of course meant that the escape was doomed and their lead dropped to below 30 seconds. With the second Sprint at Alcalá La Real being taken by Mondory followed by Rowe and then Aramendia, it was almost all over for the break. Belkin was now showing at the front of the bunch and the main contenders were all in the mix as well.

The Catch
Just 5km short of the foot of the day’s 2nd Cat climb and the break was caught – well almost as that man Aramendia surged on for a little while on his own hanging out front of the bunch by a mere 17 seconds. The bunch was now being driven by NetApp Endura, one of the most impressive teams in this year’s Vuelta so far. The small German/Scottish squad is punching well above its weight and will have come to the attention of many bigger teams on the world stage. With just over 20km to go it was all back together and the pace of the bunch was beginning to see riders dropping off the back.

First Attacks
As everything came together Armets Txurruka (Caja Rural) made the first move in the hopes of going for a long one but with 18km to go it was too soon. Everyone was aware of the severity of this climb because it may only be 2nd Category but it has incredibly steep sections and the final kick up to the line could blow the stage apart. Robert Kiserlovski (RadioShack) attacked as Txurruka was caught, maybe thinking of sitting ahead of the bunch in the hope that he could be of service to Horner further up the road.

It didn’t happen though as Edvald Boasson Hagen (Sky) decided he had nothing to lose and simply powered off the front and crossed the summit on his own. Movistar was on the front of the bunch, as they so often have been in this Vuelta, and were attempting to keep him within reach. The summit of the climb of Alto de los Frailes went to Boasson Hagen, followed by Edet (Cofodis) and Herrada (Movistar).

Others riders tried to cross the gap with Juan Antonio Flecha (Vacansoleil-DCM) and Luis Leon Sanchez (Belkin) making serious efforts. Boasson Hagen was holding 25 seconds over the bunch but he needed to have a minute in hand if he was to survive the final ramp and although he was looking strong it didn’t look like he would get enough of a gap. Katusha was lining out the bunch for Dani Moreno and the local man from Jaén had promised his son that he would take the Red Jersey today. Despite pushing hard Boasson Hagen was losing time to the bunch and was caught with 1.4km to go.

Roche versus Moreno
Everyone was fighting for position as they came under the red kite. Basso powered at the front but it was punch against punch until Moreno lit off the front aided by Rodríguez who let the wheel go. Everyone was digging in and driving up the ‘Wall’ with Valverde and Rodríguez watching each other. Roche was putting in the ride of his life and needed to finish within 7 seconds of Moreno if he was to keep the jersey. Moreno surged to the win but all eyes were on the clock, and Roche, as it counted inexorably on. Roche came over the line and it looked as if he did it just as the clock clicked onto 8 seconds difference but we had to wait until the transponders had been examined before we could be sure that Moreno had taken the jersey as well as the stage win. Second went to Valverde and third to Rodríguez. 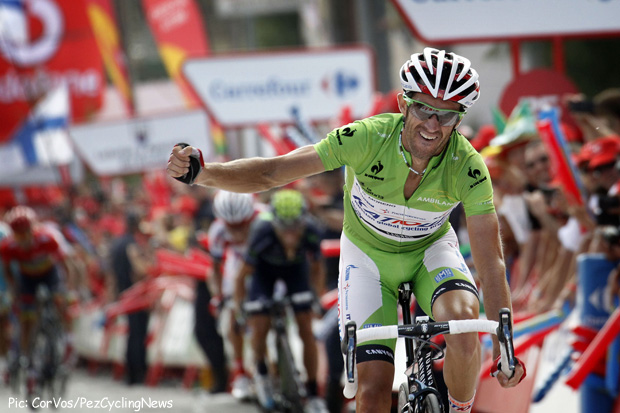 Moreno had promised his son, and those are the kind of promises a dad can’t make lightly, that he would take the race lead today…and he delivered but only just. Moreno’s attack was superb but he has his team leader Rodríguez to thank for letting the gap open. Roche lost the jersey by 1 second but he will have impressed so many people in this Vuelta by the grit of his performance. He must be getting tired of comparisons to his father but now surely he has moved ahead and is forging a career of his own. His dad, Stephen, never succeeded in wearing the leader’s jersey in Spain but time will tell just how far Nico can go in this race. 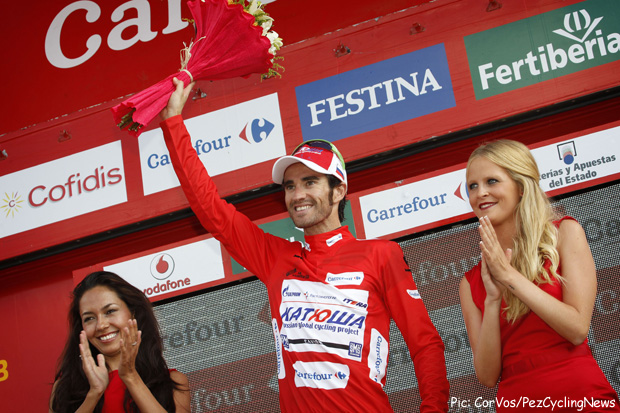 The day though, belonged to Dani Moreno. He’s a local rider and he’ll be the toast of Spain tonight but he will be well aware that he’s just keeping the jersey warm for his team leader Rodríguez. It all depends how things go in the final mountainous stage in the South tomorrow. There are two major climbs, again with a mountaintop finish, and it could be that the main GC players are going to wait until the race moves northwards – or we’ll see the big guns taking over before the time trial.

Stay tuned to Pez for all the latest action.