Vuelta Lowdown: The Wrapup and Those Power Numbers

Race Analysis: Supposed power figures, helmet sizes and the coming of the young French are just some of the subjects tackled in our last Vuelta Lowdown as Ed Hood looks back at what was one of the most thrilling GrandTours of the last 10 years.

I was wrong; I thought it would be a gruesomely boring last week procession over the mountains of eastern and northern Spain. Not a bit of it; Messrs. Roche, Rodriguez, Valverde, Nibali and Horner treated us to a great race and the organisers delivered what I had felt was a highly unlikely outcome, namely the race being decided on the last climb of the race – the awe inspiring Angliru.

At almost 42 Chris Horner (Radio Shack & USA) becomes the oldest Grand Tour podium finisher – never mind winner – by one year if our records are correct. France’s darling, Raymond ‘Pou Pou’ Poulidor finished third in the 1976 Tour at the age of 40; but the previous oldest Grand Tour winner was Belgium’s Firmin Lambot who won the 1922 Tour de France at 36 years of age. 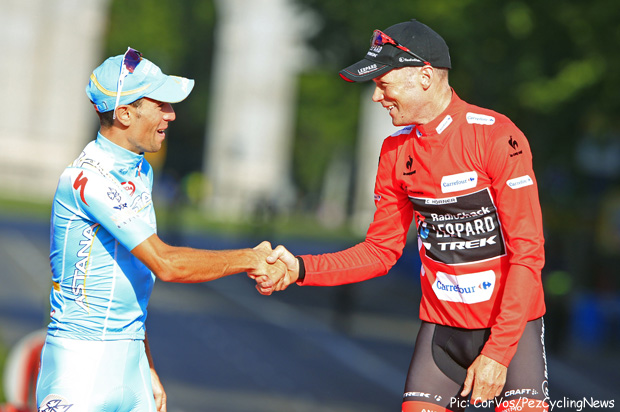 But there have been questions about Horner in this race – and I don’t mean; ‘is his helmet too big?’ or ‘are his handlebars too wide?’ – and that’s a ‘yes’ on both counts. I refer to his power outputs.

‘Certain sources’ are quoting he produced 6.83 watts per kilogram of power on the Pena Cabarga climb whilst 6.2 is the, ‘limit of natural performance.’ The implication being that Horner’s performance was out with those limits. 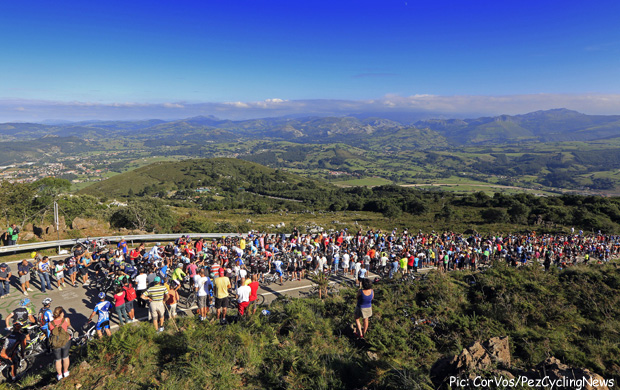 The beautiful setting of the alleged super human performance, the Pena Cabarga climb.

It wasn’t long until my phone rang with Dig Deep Coaching’s Dan Fleeman on the other end of the line. Englishman Fleeman has long been a disciple of power training and along with ex-Cervelo Test Team namesake and fellow professional turned commentator, Dan Lloyd was a client of power guru, Hunter Allen of Training Peaks coaching when ‘training on power,’ rather than heart rate, was first taking off.

Fleeman told me; ‘The figures quoted are misleading in the extreme, if 6.83 watts/kilogram was being generated for one hour then, yes that would be highly suspicious. But it wasn’t, it was for 16 minutes and forty seconds, the duration of the climb and that’s perfectly feasible. Think about it this way, team pursuit squads these days are riding four kilometres at 62/63 kph – but at the end of the race they’re done, there’s no way they could ride at that speed for four times the distance, which would be 16 kilometres or 10 miles. 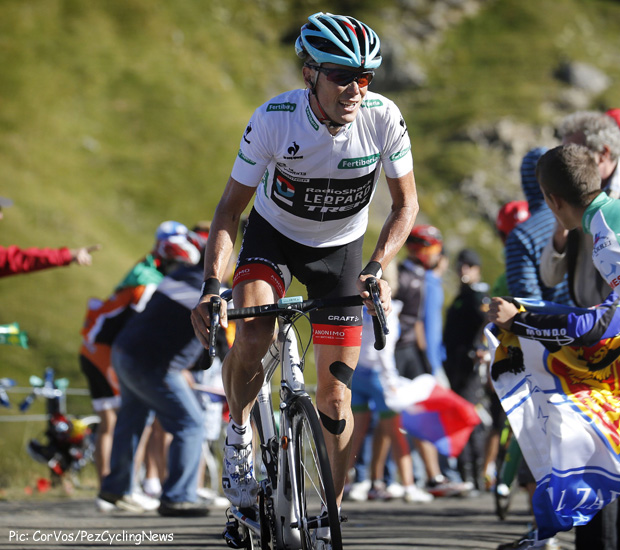 Without actually seeing what Horner’s SRM readings are it’s impossible to give anything more than a rough estimate rather than an exact figure. For example, as a basic starting point, how do they know exactly what Horner weighs, what his shoes weigh, what his bike weighs, did he still have full bottles on the bike and what food was in his pockets? There’s a big difference between hard factual data and ‘back of a cigarette packet’ calculations – but the trouble is that many people on the internet seem to be taking these estimates as gospel.’

There you have the opinions of a man who knows what he’s talking about.

But back to rubber on the road – Vincenzo Nibali (Astana & Italy) gave us a show on the Angliru, refusing to surrender to Horner and trying his damnedest to wrest back the four seconds he needed to win the race. But it was not to be, with Horner just too strong for the Italian; but ‘The Shark’ easily bested Alejandro Valverde (Movistar & Spain) and Joaquim Rodriguez (Katusha & Spain) to hold on to his second spot despite pundits saying he may crumble on the Angliru. 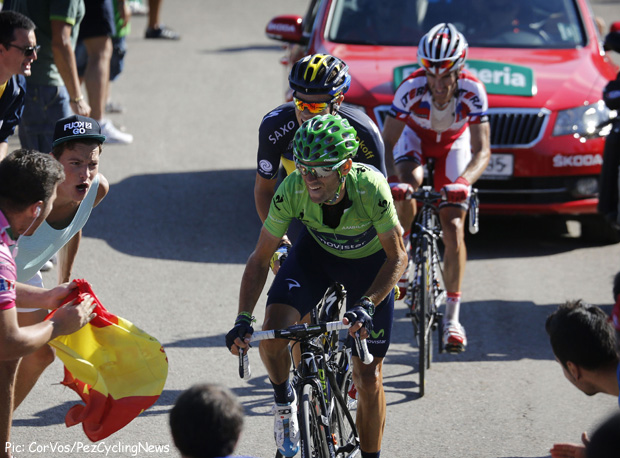 In fairness to both of the Spaniards they did remarkably well given they both had the Tour de France in their legs. The Asturian climb delivered the usual drama and madness for which it’s renowned with crazy fans, burnt out clutches, a finale made in Heaven for the TV producers and a brilliant win for another of those French ‘Young Turks.’

Diminutive Kenny Ellisonde (F des J) put his name up in lights with the climbing super stars to win in the Martian landscape at the top of the Angliru and give the French team their second stage win of the race after team mate and compatriot Alexandre Geniez won stage 15. With Thibaut Pinot in seventh spot on GC there’s little doubt that the F des J post race party in Madrid would have been a good one. 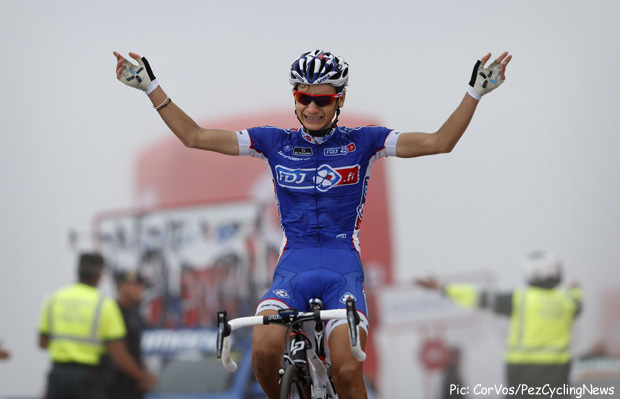 With Warren Barguil of Argos taking two stage wins it was a very good Vuelta for the French and with Nacer Bouhanni, Bryan Coquard and Arnaud Demare all having excellent years the future looks bright for French professional cycle sport.

And Cofidis even won something, with Nicolas Edet displaying tactical nous and grinta to take the King of the Mountains award. The headline writers at L’Equipe will be in Heaven.

The last stage into beautiful Madrid was one of the few which followed the script as a ‘sprinter stage’ with another young gun taking the flowers. GreenEdge’s 22 year-old former U23 World Road race Champion Michael Matthews took his fourth big win of the season – after two stage wins in the Tour of Utah and Stage Five of this Vuelta to mark himself down as one to watch for the future; albeit all the fastest men in the last 200 watched the Vuelta on TV. 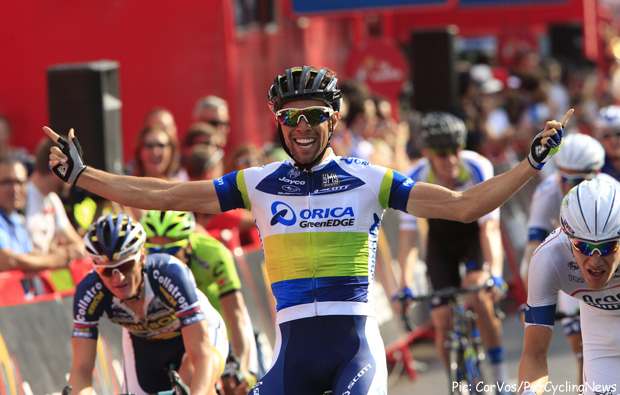 The young Australian’s win was at the expense of Tyler Farrar (Garmin & USA) who looks like he’s going to end the year with just that win in Stage Four of the Tour of California to his credit for 2013. That’s the thing about being a sprinter – there’s only one placing which counts . . .

It was a great Vuelta for the fans, the French and no doubt the TV ratings with the result in doubt until the second last day – a rare treat with ‘processions’ all too common in Grand Tours of recent years. And if I had to choose my men of the Vuelta?

Vincenzo Nibali for his class, dignity and grinta; Alejandro Valverde for his absolute refusal to give up; all of the young Frenchmen for refusing to be over awed by the gruelling parcours and presence of the likes of Nibali, Valverde and Rodriguez; Nicolas Roche and his Saxo men for their ‘never say die’ spirit and finally, Leo Konig and NetApp-Endura for punching way above their weight.

Chris Horner? If only his helmet fit and his ‘bars weren’t so wide . . . 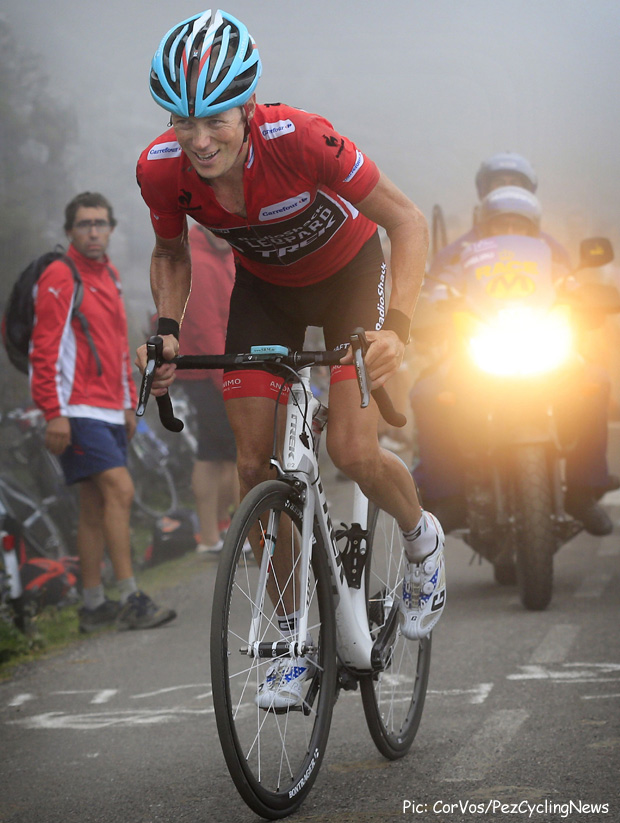 Horner: Anti-Doping Testers in the Wrong