Race Report: Yet again “the old man” Chris Horner showed he has a lot of life left those legs yet. When the cream came to the top he was there to deliver the decisive blow and the other top men didn’t see him again until after the finish. Stage and overall (again) for the American. Another crazy day in Spain and the lead changes yet again.

Yet another great day in the 2013 Vuelta a España, the start was crazy fast with no breaks being allowed to get away from the Katusha policed peloton. Eventually ten riders were given their head with the knowledge that they would be caught before the finishing climb. Once the decisive selection had been made; then Chris Horner made his move with Nibali, Rodriguez, Basso, Pinot, Valverde and Roche left in his wake. Vincenzo Nibali waited and then he launched himself up the road after the American, but it was too late and Horner took the Cava again. 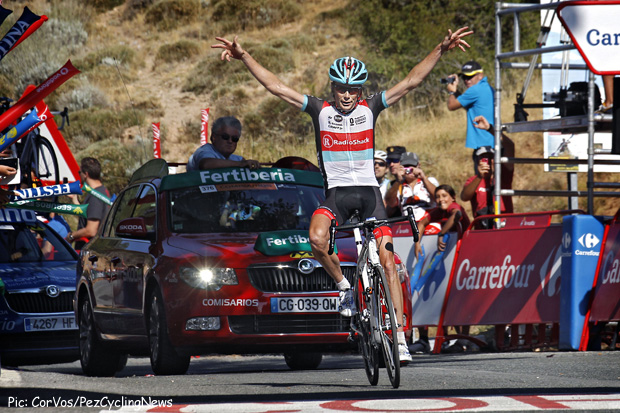 Great news this morning as it has been announced this morning that Formula 1 driver Fernando Alonso purchased the WorldTour license of the Euskaltel-Euskadi team. The team will be built around Samuel Sanchez and Igor Anton, Mikel Landa, Mikel Nieve and the Izaguirre brothers will stay with the team. Euskaltel could still be the main sponsor and Alonso will guarantee the €6 million. Alonso wants the team to give rider from his area of Asturias a chance and he is a big cycling fan.

Stage 10 from Torredelcampo to Güéjar Sierra finishing at the top of the Alto Hazallanas after a very hard 186.8 kilometres. This is the first proper mountain stage of this year’s Vuelta. The final 40 kilometres takes in the Cat 1 Alto de Monachil (1,465m) and then the summit finish on the Special Cat Alto Hazallanas (1,650m).

Here is the Vuelta a España 2013 Stage 10 Preview with Google Maps Fly Through by Global Cycling Network:

And They Are Off!
Bart De Clercq (Lotto Belisol), Alberto Losada (Katusha), Barry Markus (Vacansoleil-DCM) and Guillaume Boivin (Cannondale) had to abandon because of a crash in the neutralised zone that involved a few riders. This didn’t stop Bauke Mollema (Belkin), Tony Martin & Gianni Meersman (Omega Pharma – Quick-Step) and Andriy Grivko (Astana) setting up the first break after many attempts from others. This move didn’t last too long and after 23 kilometres Diego Ulissi (Lampre-Merida) and Francis De Greef (Lotto Belisol) tried their luck, but Katusha were having none of it.

Stef Clement (Belkin) though it a good time to initiate a break on the uncategorised climbs after about 50 kilometres, this animated a big group of 20 riders to do the same, but again Katusha was not happy with the composition and the race was all back together again.

100 K’s Ridden
The ten up front had gained a healthy 3 minute lead, meanwhile at the back of the race British rider Andrew Fenn (Omega Pharma – Quick-Step) and Belgian Thomas De Gendt (Vacansoleil-DCM) had been disqualified for holding on cars. By the feed zone with 86 kilometres to go the lead was over 4 minutes, but the hardest part of the race was still to come.

As the race neared Granada the lead was up to 5:45, then after the intermediate sprint in the city the road climbs the Cat 1 Alto de Monachil, part of the Sierra Nevada range of mountains which features in most Vueltas’. The temperatures can be hot in the city but the air is always cold off the mountain.

Through the sprint Juan Antonio Flecha took the sprint from Stef Clement and Diego Ulissi, the average speed had been 42.1 kilometres over the three hours of racing.

As the climb up Monachil bit into the legs the lead dropped to under 2 minutes with 35 kilometres to ride. At the second sprint Tomasz Marczynski was first ahead of Juan Jose Oroz and Maciej Paterski.

Fabian Cancellara (RadioShack Leopard) was doing the damage again for “the old man” Chris Horner, this had brought the lead group down to around 30 riders, all the top men are still there except Saxo-Tinkoff’s Roman Kreuziger who is suffering from some sort of low heart rate problem and Bauke Mollema (Belkin). The escape had shrunk from the original 10 to 6; Juan Jose Oroz, Juan Antonio Flecha, Nico Sijmens, Georg Preidler, Tomasz Marczynski and Diego Ulissi.

After Cancellara had done his work and peeled off; Movistar took over control as they entered the final 30 kilometres. The summit came 27.8 kilometres from the finish and Ulissi and Tomasz Marczynski rode away from the others with a couple of kilometres to go. At the top of the Alto de Monachil; Ulissi was first with a lead of 1:15.

On the descent Marczynski and Ulissi got together, behind him David De La Cruz (Netapp-Endura) had jumped from the main group and was trying to get up with the leaders, but wasn’t getting there. Georg Preidler of Argos-Shimano had been distanced on the climb by Ulissi and Marczynski, but due to his size and better descending he caught Marczynski, but Ulissi was nowhere to be seen.

The bunch of around 20 riders had four Movistar riders leading down towards the valley of Pinos Genil. The lead was around 1:40 as the leaders hit the first part of the final climb of the Alto de Hazallanas, Ulissi made it back to Preidler and Marczynski for the final action.

10 Torturous Kilometres To Go
Tomasz Marcznski didn’t want to wait and headed into the last 10K on his own with a lead of 1 minute over the Movistar led chasing bunch through the town of Güéjar Sierra in the foothills of the climb.

7 kilometres to go and Movistar had caught everyone except Marczynski and the chase had come down to around 12 riders with little groups trying to hold on at the back. Igor Anton (Euskaltel-Euskadi) jumped away, but without too much effort, Vincenzo Nibali (Astana) with Joaquim Rodriguez (Katusha) on his wheel pulled Anton back.

Astana now took control of the stage with Ivan Basso (Cannondale) close at hand; this put the Red Jersey; Dani Moreno and Samu Sanchez into trouble at the back and pulled Marczynski back.

Nibali pulled Horner, Basso and Rodriguez clear of the others, Valverde had missed the move but with Domenico Pozzovivo (Ag2r-La Mondiale), Nico Roche (Saxo-Tinkoff) and Thibaut Pinot (FDJ) he pulled himself back into contention.

Chris Horner saw the lay of the land and rode away from the others with 4.5 kilometres to go looking for that Red jersey again. After Pinot did a turn, Nibali made a small jump, this animated Basso to move forward but no one was ready to attack just yet.

3 kilometres to go and Horner had 43 seconds on Basso, Nibali, Valverde, Rodriguez, Roche and Pinot, Moreno was 1:42 down and had lost the Red jersey.

Nibali attacked on a slightly easier section at 2 to go and no one could hold his wheel, Roche could not keep with the others but fought his way back.

Under the red flag of the last kilometre and Horner was out the saddle giving it his all to keep his lead of 40 second over Nibali. On the twists and turns of the final metres the American didn’t ease and crossed the line with both arms in the air as he took stage and the overall (again).

Nibali was 48 seconds behind and Valverde sprinted over the line with Basso, Rodriguez and Pinot 20 odd seconds later, Roche had been distanced by 8 seconds. Samuel Sanchez brought Dani Moreno to the finish 2:21 later.

Horner is again in the overall lead and will hold it at least until Wednesday due to tomorrow being a rest day. The happy RadioShack Leopard rider said in his perfect Spanglish that; “he worked very hard and when there was only four left after the selection he knew he could win the stage.” 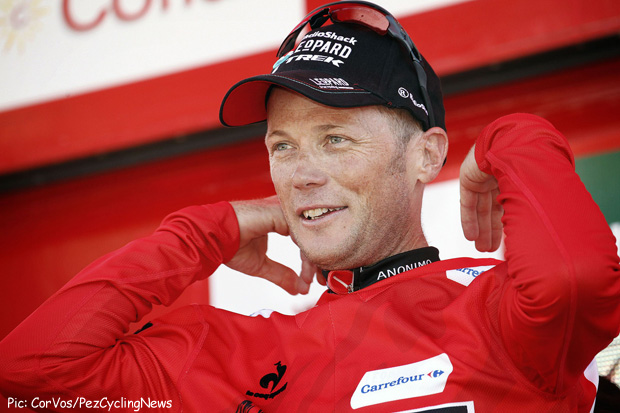 Rest day tomorrow, but keep it PEZ for all the latest from Spain and then the time trial on Wednesday.