Race Report: RadioShack Leopard Trek’s “old man” Chris Horner showed there is still a lot of life left in his legs at nearly 42 years of age. With a perfectly timed jump from the peloton in the last metres of the summit finish he took stage and overall honours. A crazy day in Spain gave us a very happy ending.

Yet again in the Spanish Tour; a stage that looked as though it might not be too exciting until the final kilometre blew apart with riders spread across the Galician countryside. Things eventually eased off and we had a big group hit the summit finish to the Mirador de Lobeier. BMC’s Ivan Santaromita lit the fires of action up the final climb, but it was Chris Horner who finished the job off to put the RadioShack Leopard Trek name on the red leader’s jersey.

The Stage 3 Course
Vigo to the Mirador de Lobeira/Vilagarcía de Arousa is not that far, but the race takes a circuitous route following the coast line to give a distance of 184.8 kilometres. The stage is flat and it will be the wind that will be the biggest problem until the last 4.2 kilometres which kick up to the finish line, the sort of course that World champion Philip Gilbert would to be unbeatable on a couple of years ago.

And They’re Off!
We didn’t have to wait long for the break of the day to form; Fabricio Ferrari (Caja Rural-Seguro RGA), Cyril Bessy (Cofidis), Pablo Urtasun (Euskaltel-Euskadi) and Vincente Reynes (Lotto Belisol) soon had a minutes lead and after 8 kilometres they were joined by Luca Dodi (Lampre-Merida). Astana and Omega Pharma – Quick-Step were policing the peloton and let the group extend their lead quite quickly and after 20 kilometres of racing they had 5 minutes in hand. 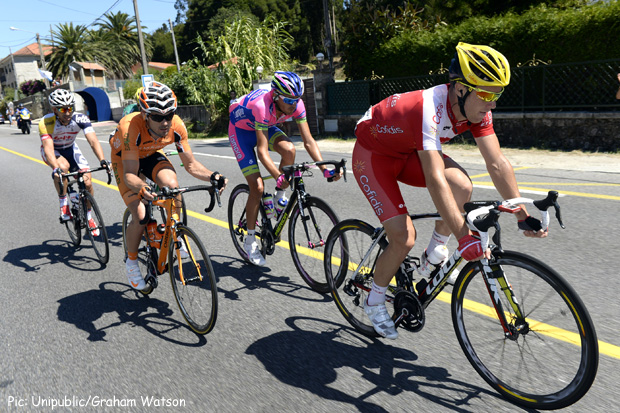 At the end of the first hours racing the lead was touching 6 minutes all five riders were contributing to the escape. Uruguayan Fabricio Ferrari has been riding for Caja Rural for four years and this is his first Grand Tour, the same goes for Luca Dodi (Lampre-Merida) who is also riding his first year with the professionals, neither of them have wins in their palmarés. Pablo Urtasun began his professional career with Kaiku, then moving to the Portuguese Liberty Seguros team before becoming a lead-out man for Koldo Fernández at Euskaltel-Euskadi. He has stage wins the Tours of Alentejo, Rioja, Asturias, Britain and Castilla y León, although he was out of luck in this year’s Giro, dropping out of the race after a fall on Stage 5.

Cyril Bessy of Cofidis spent four years with Besson Chaussures and Saur-Sojasun, winning the Classic Loire-Atlantique and a stage in the Tour of Alsace. Bessy’s best result this season was a 17th place in the Boucles de l’Aulne in France, this is also his first Vuelta a España. Vincents Reyes (Lotto Belisol) from Mallorca has two wins to his name, both in 2007; the Cala Millor Trophy in the Tour of Majorca and the Circuito de Getxo, next year he will be riding for the Swiss IAM Cycling.

Yesterday Sky’s Sergio Henao was unexpectedly dropped on the summit finish on the Monte da Groba, his team manager; Nicolas Portal explained that the Colombian had forgotten to eat and so was drained at the finish. Portal said: “He wanted to attack, but lost time due to a mistake.” The other top name to suffer on Sunday was Euskaltel-Euskadi’s Samuel Sanchez, after the finish he said: “I had a bad day, there’s not much point in going into more detail. With seven or eight kilometres to go, I had a moment of weakness and that was it, nothing more than that.” “The disappointed ex-Olympic champions added: “The change of pace from flat to climb is always a tough one and always catches some riders out and this time round it was me. The race has just started and we will see what happens, but it’s not the ideal start at all.”

Lunch Time
Through the feed zone after 80 kilometres in A Lanzada the five up front were 4:23 in the lead.

At the intermediate sprint in O Grove the lead was down to 4:04 and Fabricio Ferrari was first ahead of Vincente Reynes and Cyril Bessy, a 100 kilometres had been covered in two and a half hours.

The lead was slowly coming down, Movistar, Sky, BMC and Belkin added their strength to the efforts of Astana and Omega Pharma – Quick-Step; 72 kilometres to go and the lead was only 2 minutes.

When the lead was down to 1 minute the bunch eased off not wanting to pull them back too soon. At the second sprint in A Escusa; Urtasun beat Dodi and Bessy, behind the leaders there was a crash in the peloton, but all regained the field without any problems, Sky’s Sergio Henao was one of them.

50 Kilometres to Go
Into the third hour and the lead for the five had been allowed to extend to 2:32, Astana had left the work to Omega Pharma – Quick-Step with RadioShack Leopard also moving forward.

Into a sharp left-hand bend, with 42 kilometres to go, a lot of riders hit the ground as all the teams were fighting for a good position. The speed was high which gave the fallers a hard chase, Bauke Mollema (Belkin) was one of them. In the confusion the break was caught.

Movistar and Katusha had the helm of the peloton with RadioShack Leopard also putting men to the fore. Splits were being caused by the speed and the road conditions which had tricky corners and sections of the road cordoned off.

With 30 kilometres to go a truce was called and the front group of around 20 or 30 riders eased to let things close up a little as there was a big group behind being driven by Belkin and Saxo-Tinkoff.

Movistar were not happy with the speed at the front and put more pressure on and the gaps opened up again with four distinct groups on the road with 25 kilometres to go before the hard climb to the Mirador de Lobeira.

Eventually things calmed down and with 18 kilometres to go the race was back together with only a few stragglers off the back. Cannondale had put their men on the front keeping the pace at a reasonable pace with Movistar and Astana close by. At the back Mollema needed three team mates to come back to help him regain the bunch due to yet another mishap.

The Real Action Begins!
5 K’s to go and Orica-GreenEdge put a spurt on through the village before the road started to rise, Juan Antonio Flecha (Vacansoleil-DCM) attacked but was caught and passed by Italian champion Ivan Santaromita (BMC) into the last 2 kilometres. Under the red flag he had 7 seconds and no one wanted to make the effort. 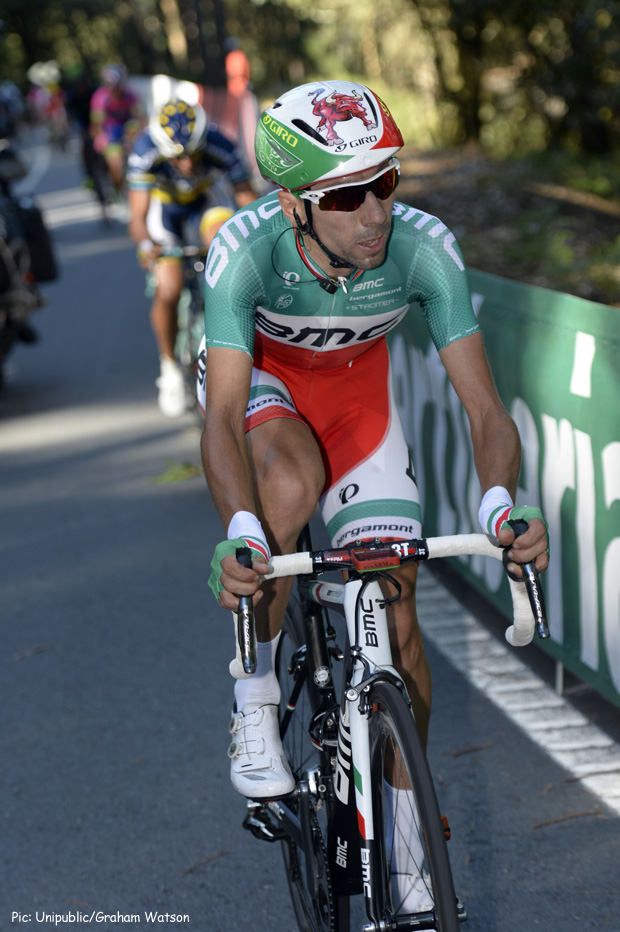 Chris Horner (RadioShack Leopard) shot out of the pack to pass the suffering Santaromita as the others only watched him go. Round the last few bends and he had the gap to hold on for the win. Behind the brave American; Alejandro Valverde (Movistar) had left the case too late and finished 3 seconds behind Horner, dragging Joaquim Rodriguez, Rigoberto Uran, Daniel Martin and surprisingly Bauke Mollema his wheel across the line. 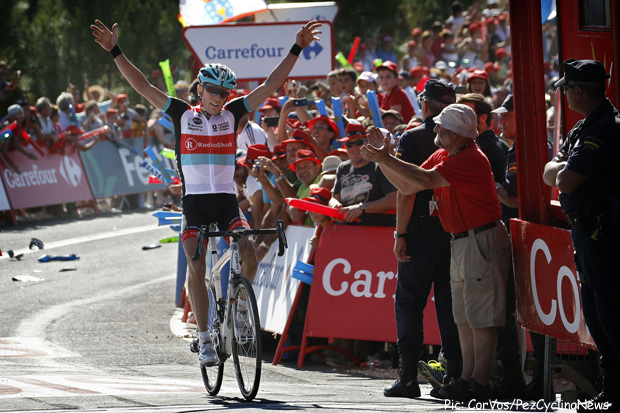 Chris Horner had done enough to take the leaders red jersey from Vincenzo Nibali (Astana), saying at the finish, in a mix of English and Spanish, “I’m very content with the win, especially considering I haven’t raced (in Europe) since the Tirreno-Adriatico. The high mountains are better for me and I’m looking forward to the rest of the race.” He finished by thanking all the people of Spain. He is a part-time resident of Denia on the Costa Blanca.

Keep tuned to PEZ for all the Vuelta action.