Scott Coady is a man on a mission – to raise $100,000 for the LAF. After donating the proceeds from his film “The Tour Baby!”, he’s only a few 000’s short of the goal. For the final push, Scott asked every member of Lance’s 2003 TDF team to sign a USPS jersey…

Of course they did – including Lance – and now you could win this jersey – here’s how:

ONLY 95 TICKETS LEFT
Ojai CA (June 23, 2005) – There are only 95 tickets available in Scott Coady’s incredible donation-based online raffle to benefit the Lance Armstrong Foundation to win a 2003 USPS Team jersey with the entire TdF team’s signatures including Lance Armstrong! Over 200 tickets have been sold already – so you chances are around 1/300 – not bad!

Ticket Dates
Tickets are available until June 24th at 2:00 PM PDT and with winner’s name will be drawn on July 13 or 14 at the Tour de France by a famous Tour de France rider. All the details are at: TheTourBaby.com/signed_jersey_raffle/ 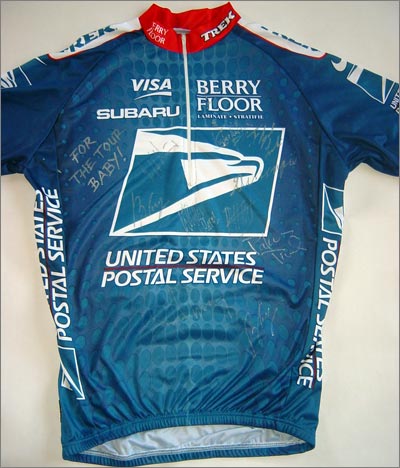 Actual photo of the jersey you could win – signed by every member of Lance’s 2003 TDF team.

About The Tour Baby!
The Tour Baby! is the hilarious and inspiring tale of Scott Coady’s adventures following the entire Tour de France. The film was released on DVD in August of 2003 to rave reviews and is quickly becoming a “must see” among the cycling community. Scott made the film and pledged to use it to raise $100,000 for the Lance Armstrong Foundation as his way of fighting for his best friend’s daughter who at age 10 was diagnosed with brain and spinal cancer. For more information, visit: www.thetourbaby.com

Read the PEZ-Review of The Tour Baby here.

For more details about the film visit: TheTourBaby.com