Which ladies set the roads on fire this year? One name may dominate, but there were a whole host of riders who made their mark on the women’s racing scene in 2013.

Deservedly, the profile of women’s cycling is building with greater uptake of the bike in terms of leisure, health and transport in a growing number of countries. There have been significant changes at the top of the UCI with Tracey Gaudry appointed to sort out some of the glaring oversights that have blighted the women’s pro scene in the past.

There are superstars and personalities, teams with strong ethics, and high-quality races so 2014 promises much. But before we look forward, it’s time to pay tribute to the women who made 2013 so fascinating. PEZ’s Top Ten Performers for the Year are … 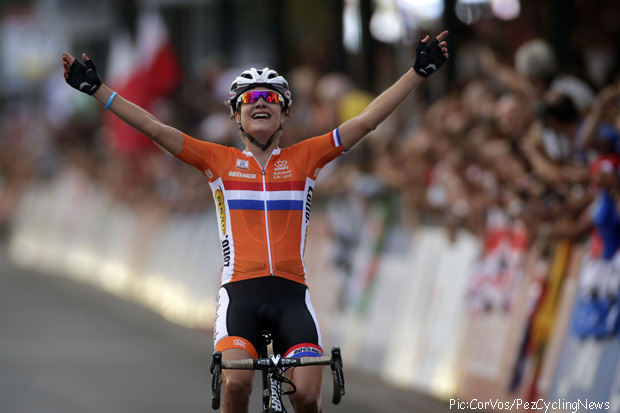 1: Marianne Vos
Marianne Vos is the best rider on the planet. Male or Female. No question. A brief history of her 2013: 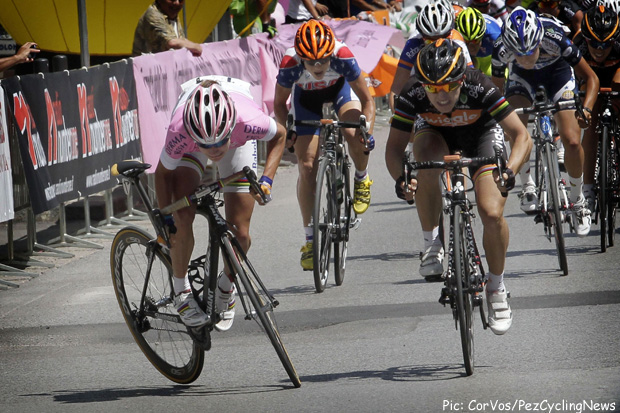 Strongest rider, great tactician and a superb bike handler. Marianne managed to hold onto this one and not crash after hitting a pothole in the closing meters of a stage at the Giro di Rosa this year.

(Oh yeah, some mountain bike racing and winning to keep her hand in …) 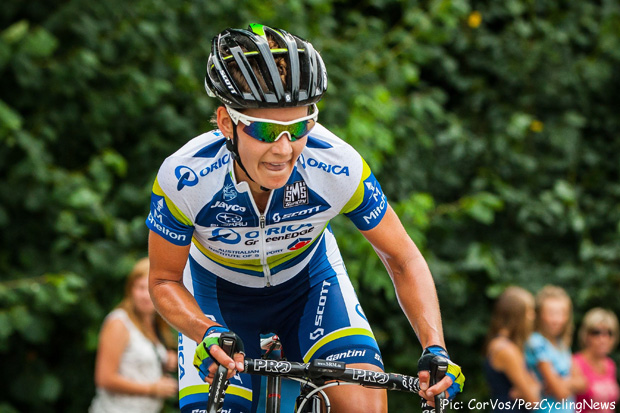 1.5: Emma Johansson
The caveat to the ‘Vos is the best’ statement is that Sweden’s Emma Johansson had her best ever season, hitting number one on the UCI rankings. Emma J’s consistency this year was staggering. She finished (by my count) 74 race days, and was only outside the top ten eight times – seven times placed 11th to 19th, and once in 31st!

With a solid Orica-AIS team supporting her, and looking for strong leadership, Johansson delivered, especially head-to-head against Vos at the Emakumeen Euskal Bira in June with road, TT and overall victories. She also took a national ITT title, stages and overall at the Thuringen Rundfahrt, and led the Route de France from the opening prologue until the whole field was undone by Linda Villumsen on the last stage. She’s just won the Swedish cyclocross title. Targets for next year – World Cups and the road Worlds. 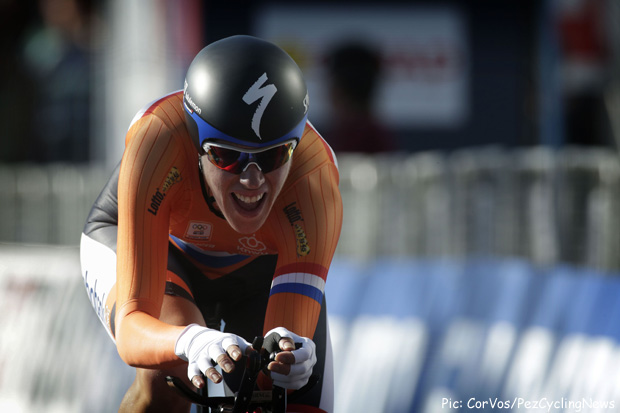 3: Ellen Van Dijk
The smiling and genial Dutchwoman blazed her way through time trials this season, powering a super-strong Specialized-lululemon squad to world team gold in Florence and then backing it up to take the individual rainbow jersey just days later. She’s got road-racing form, too, putting her TT skills to use in winning Le Samyn des Dames by over three minutes in February and the Energiewacht and Gracia Orlova races overall. Then a key role in Vos’s worlds team to round out a successful year. In 2014, she’s off to join the Dolmans-Boels squad. 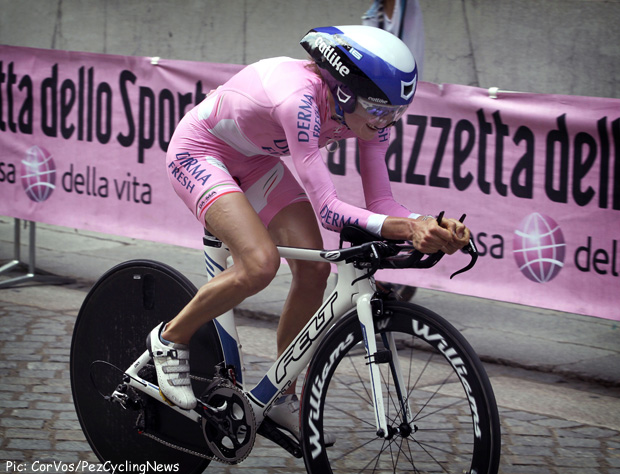 4: Mara Abbott
After a difficult couple of years, Abbott returned to the top of the podium with a supreme victory in the Giro d’ Italia Femminile. The season built up gradually with a win at San Dimas in March, then a win at Redlands in April and two stages and the overall at the Tour of the Gila in May.

She went to Italy at the head of the USA squad and stormed to back-to-back stages at Beigua and San Domenica (putting over eight minutes into Vos in two days!). It was an outstanding win from an outstanding talent, and hopefully it lays to rest some of the doubts that seem to afflict Abbott about her own abilities. 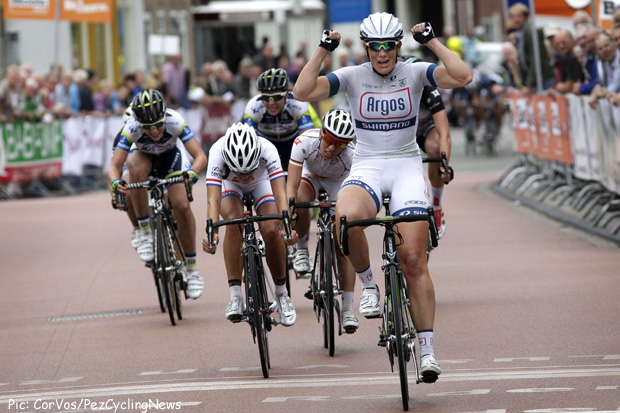 5: Kirsten Wild
The Argos-Shimano rider is more than just a sprinter. Starting the season full-gas at the tail end of January with three stages and the overall in Qatar, Wild took the Dwaars door Vlaanderen and Gent-Wevelgem, went top ten in Flanders and notched four stages at the Energiewacht Tour in a little over a spring fortnight.

More wins followed at the Giro d’ Italia Femminile, the Lotto-Belisol Belgium tour and the Boels Rentals Ladies Tour … before silver on the track in October at the European Championships. Mighty. 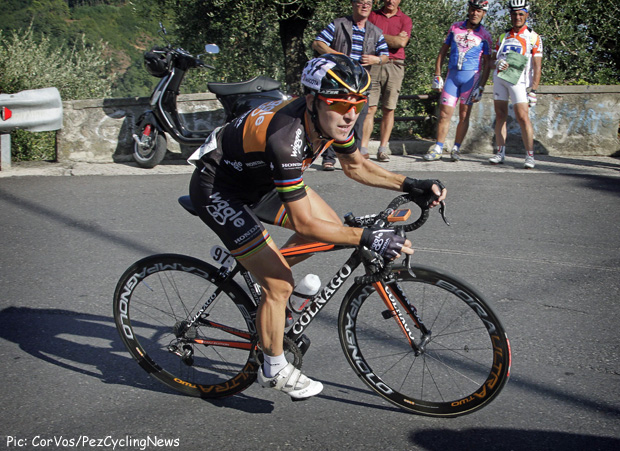 6: Giorgia Bronzini
The fastest finisher in the women’s game? Probably. Sprint wins in France, Italy, Belgium, Luxembourg and China are the bare bones of the story: Bronzini won six stages in a row in La Route de France, took three at the Giro d’ Italia Femminile and one at the Giro di Toscana.

Wiggle-Honda got a lot of bang for their buck, with 17 season wins for Bronzini. More of the same for 2014? 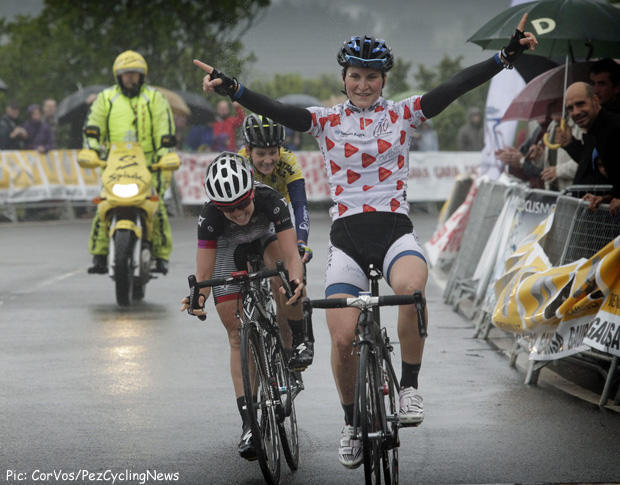 7: Elisa Longo Borghini
Longo Borghini is one of a new breed of Italian women who seem as comfortable on ‘foreign’ teams as they do on an Italian squadra. Racing for Hitec Products, the season started with a bang – winning the Trofeo Alfredo Binda world cup at home.

The versatility of ELB is proven by fourth at Flanders, second at Fleche Wallone, second at the National ITT … and then the season almost ended with another bang. A huge crash in the Italian road race put the 21-year old out of competition with a fractured pelvis. Incredibly she came back just two months later and built up to go top ten at the brutal Worlds road race and third at the Chrono des Nations.

What will she do with a full, healthy season to play with next year? 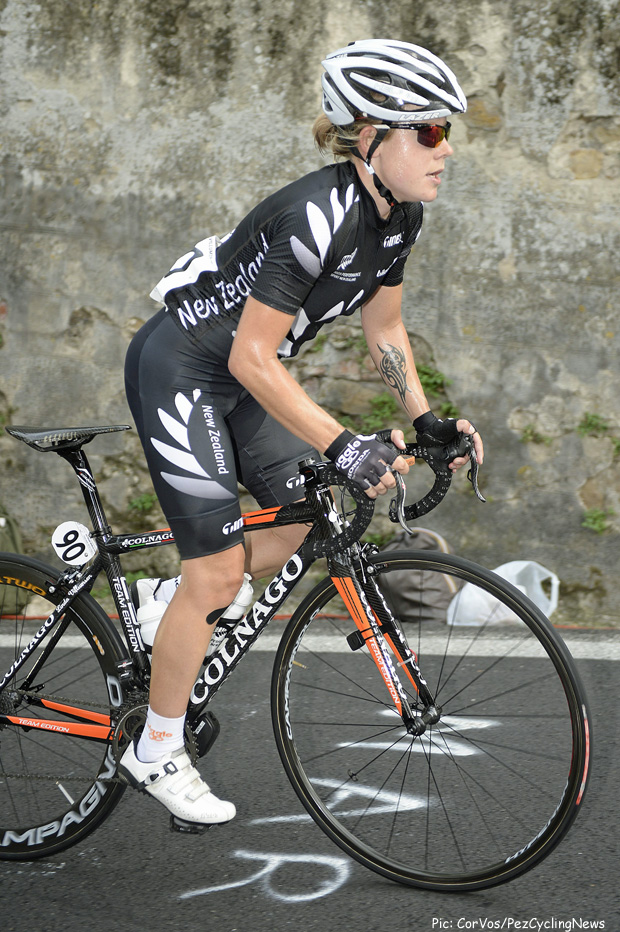 8: Linda Villumsen
The Dane-turned-New Zealander had seemed to suffer from a bit of ‘career drift’ for a while but 2012 and 2013 saw her redirect onto well-signposted highways to success. Thanks in part to Marco Pinotti, who coached the TT specialist to new heights, Villumsen has nailed her place in the upper reaches of women’s cycling.

Solid in 2012, Villumsen staged one of the coups of the season with a monster solo breakaway win on the last day of the Route de France taking six minutes out of the field to win overall. Second in the TTT, second in the ITT and sixth in the road race at the worlds seem to suggest a broadening of horizons … 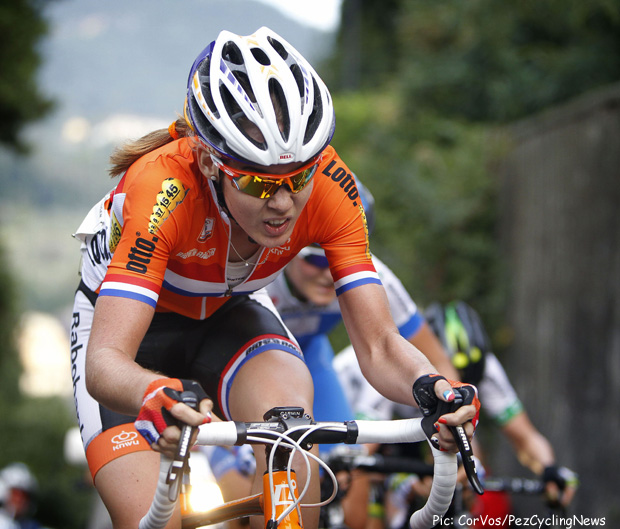 9: Anna van der Breggen
No major wins for van der Breggen, but incredible consistency for a woman who’s still only 23. Five top tens in six World Cups, and a fourth in the Worlds road race riding as enforcer for Marianne Vos mean that if the number one doesn’t deliver (probably because she’s been abducted by aliens or something), the Dutch have a ready-to-go replacement. She also picked up seven overall top tens in eight stage races. Watch her turn some of those into big wins in 2014. 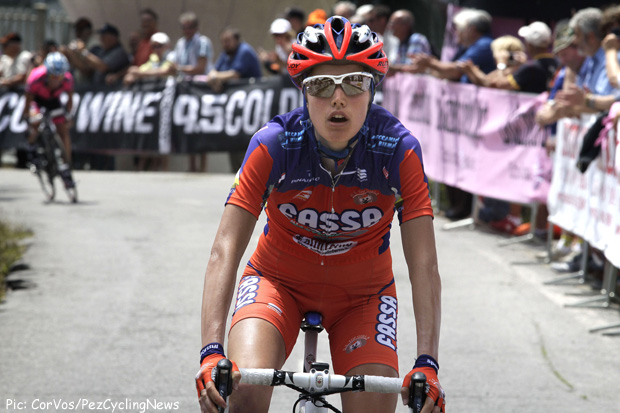 10: Francesca Cauz
Not the biggest star yet, and a controversial choice, but making huge progress this year. The Top Girls Fassa Bortolo rider turned 21 in September, breaking through at the Giro d’ Italia Femminile.