Race Report: Before the start we had a pretty good idea which necks the medals would be going round at the end of the day, but in which order? Tony Martin rode smoothly and fast for his third World Time trial championships in a row and Fabian Cancellara just missed out on Silver to a fast finishing Bradley Wiggins.

Another exciting finalé to a World time trial championships as the tree top men in the world of time trialing battled over the roads of Tuscany. Tony Martin of Germany led from the start ramp to the finish line, but he didn’t have it all his own way as Fabian Cancellara matched him for the first half of the course before slowing down in the back half and losing his silver to a confident Bradley Wiggins.

The Men’s Course:
From Montecatini Terme to the finish in Firenze is 57.9 kilometres of flat roads, well except for a little lump after 7 kilometres. The finish into the town centre is similar to the previous time trials in that it is quite technical and has a cobbled section at the Duomo in the last 6 kilometres.

The Top Riders
All the top Pro riders who can ride a good time trial are lined up in Montecatini Terme, but all eyes will be on the last four riders; Taylor Phinney (USA), Bradley Wiggins (GB), Fabian Cancellara (Swi) and Tony Martin (Ger) who will be fighting for the podium.

1st. Man Off
Herbert Mugwanya of Uganda was first off down the start ramp at 13:15CET to be followed by 78 other riders at one and a half minute intervals.

1st. Time Check:
The first time check came after 7.3 kilometres at the top of the little climb at Serravalle Pistoise. The early leader was the German Patrick Gretsch with a time of 10:01.9, early days though. Belkin rider Luis Leon Sanchez (Spa) looked very strong in the first part of the race, but his time of 10:04.29 was maybe not as fast as he hoped.

Ilinur Zakarin (Rus) was the first rider to get under 10 minutes. Rohan Dennis (Aus) was the next fastest time with 9.55 a good 18 seconds faster than Nico Roche of Ireland. Infantino of Colombia has the bad luck to be attacked by a cat. Frenchman Sylvain Chavanel shot through the 1st check with a new fastest time for the medal hopes to aim for.

The stars came out to shine and the first through; Taylor Phinney was down by 2 seconds on Chavanel and Bradley Wiggins 3 seconds more. Cancellara and Martin were on the same time with Cancellara a micro-second ahead.

2nd. Time Check:
The second check was after 24.9 kilometres in Quarrata-Olmi and again Gretsch was the fastest of the early riders, setting the goal for everyone with a time of 29:07.93 and Sanchez was 15:48 slower. Nelson Oliviera of Portugal had lifted his pace to knock Gretsch off the top in 28:55.79. Kakarin had blown a bit with 29:32. Dennis was still going strong in 28:34.34 and again was fastest at an average speed of over 50kph, Roche was 30 seconds down.

Reports from out on the course had Cancellara slightly ahead of Martin with Phinney and Wiggins losing time. Chavanel had also slowed and was no longer the fastest rider before the top guys.

Vasil Kiryienka of Belarus had pushed his way past Chavanel for the fastest time of the “other” riders, but it was good enough to beat both Phinney and Wiggins, but Cancellara and Martin were flying with the German getting the edge.

3rd. Time Check:
42.3 kilometres for the third time check on the Via Pistoise in Firenze and again it was Mihaylov the early leader and Gretsch was slower than the Bulgarian’s 50:55. Saramotins from Latvia soon got the better of him with 50:30.33. Siutsou (Belarus) went top with 49:38. Dennis through the 42.3 K point at 49:33 still the top man. Outsider Rasmus Quaade of Denmark put up a new fast time, but again it was Kiryienka who topped the board.

Martin was riding at a consistent speed; with Cancellara matching him at around 10 to 15 seconds behind as Wiggins was lifting the speed cutting his deficit to 9 seconds on the big man from Switzerland as they came towards the third time check. Phinney was just not going fast enough.

Oliviera had the new best time with 1:08:51 that was at an average speed of 50.4 kph. Sky rider: Siutsou sprinted up the line for 1:08:36 and the temporary lead. Rohan Dennis had suffered from his fast start and couldn’t beat Siutsou coming in 9 seconds slower. Roche had lifted his speed for a finish time of 1:08:50 to go into 3rd.

Vasil Kiryienka of Belarus put everything into his last meters for a brilliant time of 1:07:02.66 for the top step, would he hold a podium spot? Probably not looking at how fast Martin, Wiggins and Cancellara were going.

Britain’s Bradley Wiggins had lifted the pace and was closing on (around 6 seconds) Cancellara as they neared the cobbles of the Duomo as Phinney was over 1 minute back.

Cancellara knew he had to give it everything he had and skimmed through the tight city corners to keep Wiggins in check and the Silver medal. Along by the river-side; Martin still smooth, but Cancellara was out of the saddle and looking like he was on his last legs as the GPS said Wiggins and Cancellara were even.

Taylor Phinnney came in with a disappointing 1:07:44 and Wiggins was nearly on his wheel putting in the fastest time with 1:06:22.74 and then Cancellara putting his back into it and sprinting for all he was worth to just lose to Wiggins by 2 seconds. 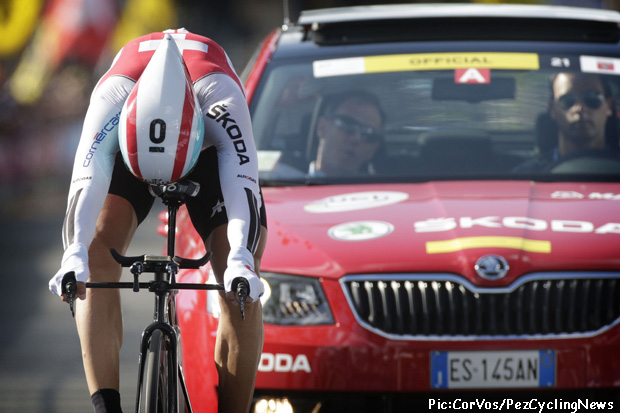 Cancellara gave it his all but just came up short in the race for silver.

It didn’t seem long before Tony Martin rolled up to the line and without too much effort crossed the line holding three fingers in the air for yet another World time trial Rainbow Jersey. 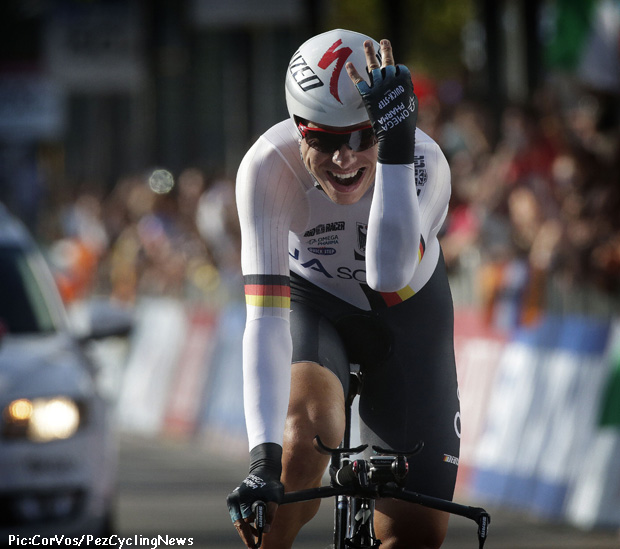 Tony Martin gave a master class in time trialing, his speed was constantly fast from beginning to end and at no point was he in trouble. Cancellara started fast, but faded towards the end as Wiggin’s lifted his speed

The World TT champion said after the finish: “I knew I had to give more than 100%. For sure I had the big advantage of starting last. The course suited me the best and I could give it everything I had. I could power through the whole course, it was just perfect.” 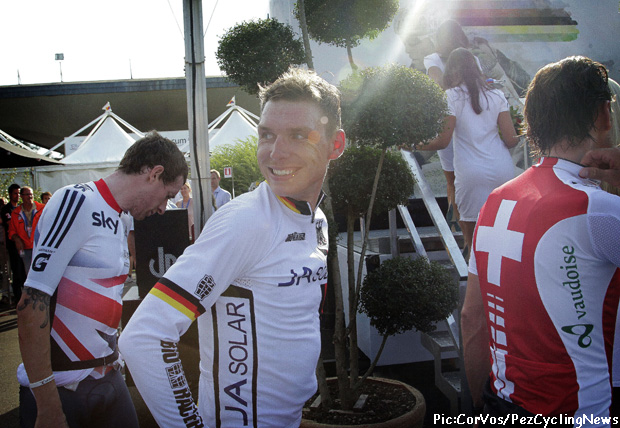 The sun is shining on the smiling winner Martin.