The 2013 World Cycling Championships Junior Men’s Road race rolled today in Firenze, and our very own Ed Hood took to the streets – and bars – for all the roadside action…

It’s cooler in Florence, today – most welcome to cool down my bites. First stop today is a hardware store for fly spray – I was eaten alive by bugs in the room last night. I have bites all over me, including my eye and lip – so I look even more like Charles Laughton in The Hunchback of Notre Damme than usual. 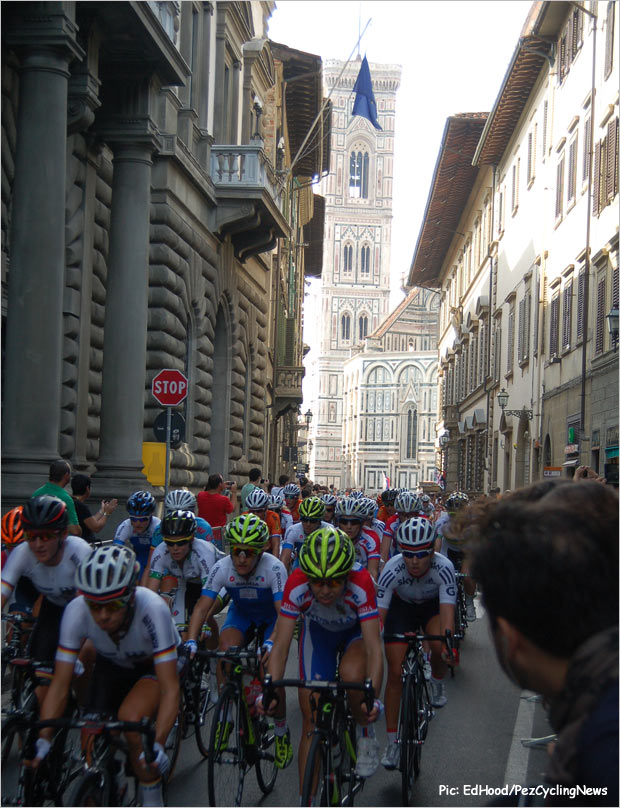 Anyway, juniors and ladies, today – both coming in from Montecatini Terme.

But first… Politics.
Mr. Brian Cookson holds a press conference as new president of the UCi. 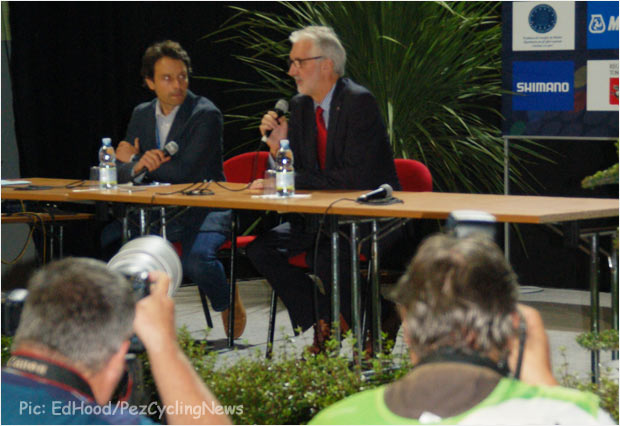 First question; “what is your relationship with Russian Cycling President Mr. Igor Makarov ?” Perhaps it’s appropriate that Niccolo Machiavelli was a Florence man . . .

The Juniors: there are two laps to go when I sit down in the press tribune.

There’s been a World Junior Road Race Championship since 1975 when Roberto Visentini won, the suave, long haired Italian would go on to win the Giro. Greg Lemond was Junior World Champion in 1979 and Damiano Cunego in 1999. But not all junior world champions go on to such success.

Some are precocious, too good too early and can’t handle it when they realize that in the pro ranks they’re ‘just another rider.’ Some can’t handle living like monks from when they’re schoolboys and succumb to the pleasures of the flesh.

Some suffered from the frustration of not being competitive against riders who they could beat as juniors but who had turned to chemical assistance – they did the same, sometimes with disastrous consequences.

Perhaps the biggest success story of recent junior Worlds is the Italian, Diego Ulissi, winner in 2006 & 2007 and now finding his feet with Lampre. 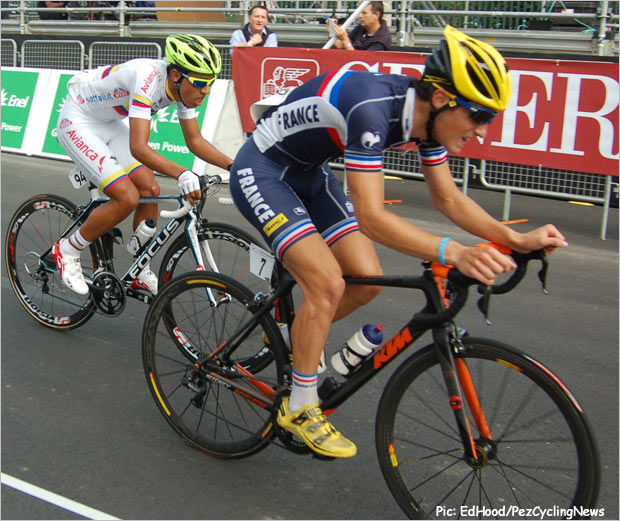 There are two clear as the bell approaches, Franck Bonnamour of France and Daniel Martinez of Colombia who’ll be well at home on the climbs. The chase group is reported as 16 strong but it’s maybe half as big as that again when they pass.

It doesn’t look like Bonnamour and Martinez will survive – the gap isn’t big and the Colombian is missing spells. 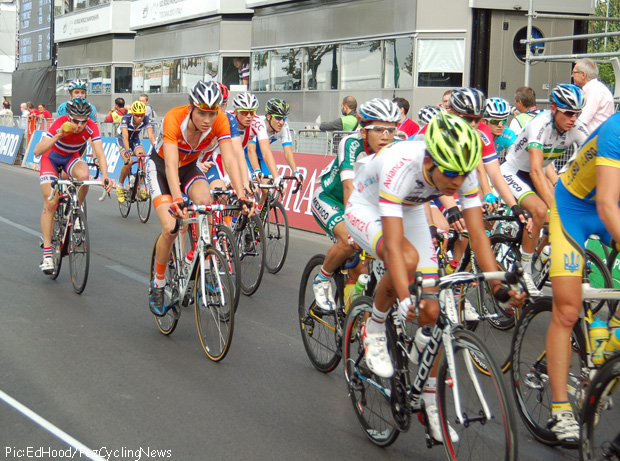 In the chase group is cyclo-cross Junior World Champion, Mathieu Van Der Poel (The Netherlands) – it must be cool to have ‘Pou Pou’ – the legendary Frenchman, Raymond Poulidor as your granddad. Van Der Poel’s dad, former cyclo-cross world champion, classic winner and Capo of the peloton married Poulidor’s daughter.

And as I write this, young Van Der Poel attacks hard on the Fiesole – in vain ? The Salviati will tell us. Meanwhile, the guys with the big lenses gather – a cliquey bunch who don’t communicate much with those outside their circle.

Van Der Poel is alone, orange jersey flapping in the wind, what’s left of the peloton is chasing hard but the lanky young man from Kapelle in Zeeland hangs on to win in the grand manner with the bunch sprinting at his heels. And if you want your eyes to pop, check out this young man’s palmares – his role of honour in cyclo-cross and road racing is very impressive. 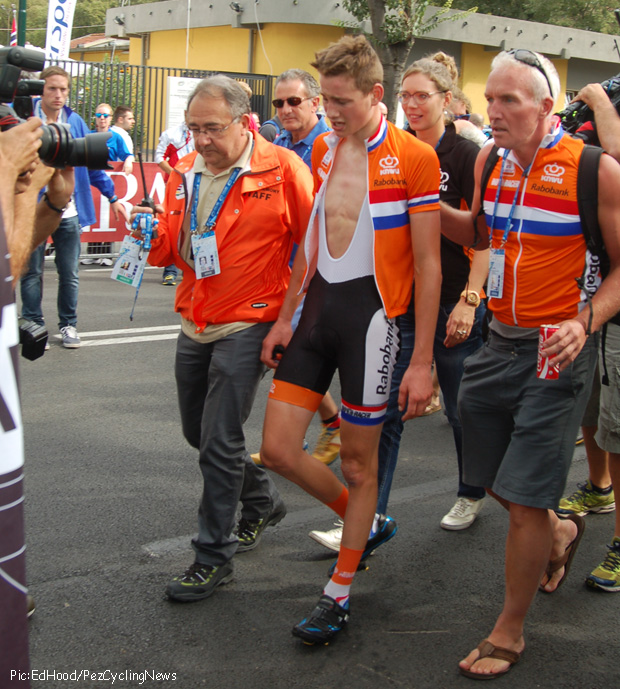 Will he cope with the fame, carrying that famous name and the inevitable tail off in results when he goes pro ?

Time will tell – but grandad will be there to gently guide, I’m sure. 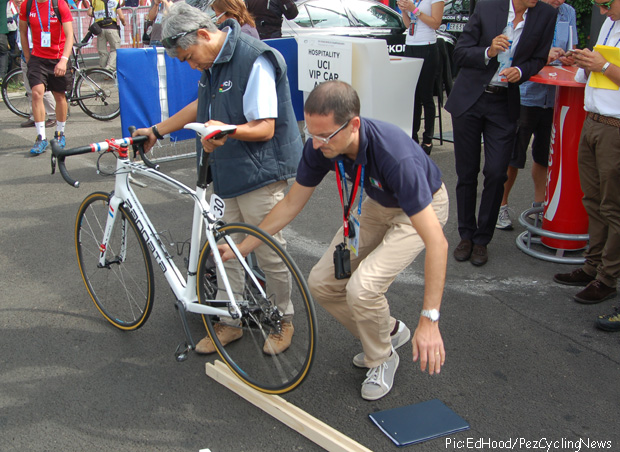 His bike is checked immediately to ensure it’s within the maximum travel of 7.93 metres or 26 feet with one rotation of the pedals – as required by UCi regulations. Then he’s whisked off to the ‘controle’ – sad but necessary, unfortunately.

Dad is there for the press conference and still skinny, he accepts the congratulations graciously – but make no mistake, Adrie is a hard man.

‘Back in the day’ an English rider wanted to win a certain race, which he was leading; a deal was cut with Adrie that his lead wouldn’t be too seriously challenged if a ‘donation’ was made.

The Englishman won but ‘forgot’ to make the donation. Despite his being a talented rider, from then on he’d find himself chased down if he was up the road; no one would cooperate in breaks with him or point out obstacles or pot holes any more. You didn’t Welch on a deal with Adrie.