Race Report: On a beautiful late summer afternoon in the gem that is Florence, Patrick Lefevre’s men in blue, black and white showed once again why they’re the classiest team in the world.

Down at the intermediate checks to Australian bush rangers Orica-GreenEdge the Belgian squad held their nerve and captained by bestial German, Tony Martin took the Team Time Trial Championship of the World by less than one second, leaving the Aussie team broken hearted in the process.

Sky took third, edging BMC down to fourth – after a silver medal in 2012 and all the specialist training, there’ll be little laughter at the BMC dining table, this evening. A cliff hanger of a result to end a great day of racing . . .

The Course
One climb – but not too stiff – wide, flat, fast with sunshine and little wind; perfect parcours and atmospherics for the most beautiful race in cycling, through some of Italy’s loveliest and most famous countryside – Tuscany, with the finish in Florence.

A race where it’s not necessarily the case that if you stick a bunch of stars together they’re going to dominate – some of the best TTT squads in history have been better than the sum of their parts. In the ‘good old days’ before the UCI binned the original Worlds TTT it was contested by nationals teams of four with three to count. Now it’s for pro teams with six to start and the watch on the fourth rider.

How It Played Out
Early leaders were the Rabobank Development team who held the lead until World Tour squadras Vacansoleil then Lotto-Belisol deposed them – neither team with a great track record in the discipline.

F des J split their two World Tour rivals but further back out the course the real battle was being fought between the favourites – with reigning champions QuickStep having World individual time trial champion Tony Martin of Germany the nitro injection in the Belgian team’s motor.

They’re serious about this one with TTT specific training camps held over the last few weeks. A surprising Euskaltel go second – the need for a 2014 contract is strong . . .

And now Lampre go second, Lotto still lead. But things ‘get real’ as Garmin dynamite a minute off the Lotto time – 1:5 for 57 K, scary.

A surprising Cannondale usurp them; a podium is now highly unlikely for Mr. Vaughters team. And to underline my point, Belkin go second.

Radio Shack is another high octane team with multiple Classics and World Time Trial Champion Fabian Cancellara as the turbo. Saxo come in, 1:6 and then slump over their Specializeds, they couldn’t have given much more. Astana go top from Cannondale and Garmin; but the big figure of Fabian Cancellara soon sorts that out – dragging The Shack to the numero uno spot. 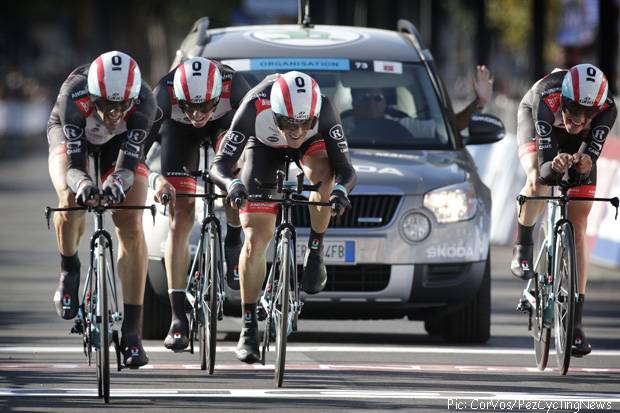 Orica own quarries all over the world and it would be easier breaking rocks than hanging on to that string slicing through the warm Tuscan air – they’re down to four and once steady shoulders now rock and roll as those little sprockets take their toll, but they’re up on Patrick Lefevre’s super team.

Sky are 20 seconds off the pace, BMC another 20 seconds even further away from the nail biter between the Belgian flooring squad and the Swiss bike builders. Sky come home; they go top, heads hung as they cross the line for 1:4 – the speeds are getting crazy. Phinney leads BMC past the Duomo, they still have five men. 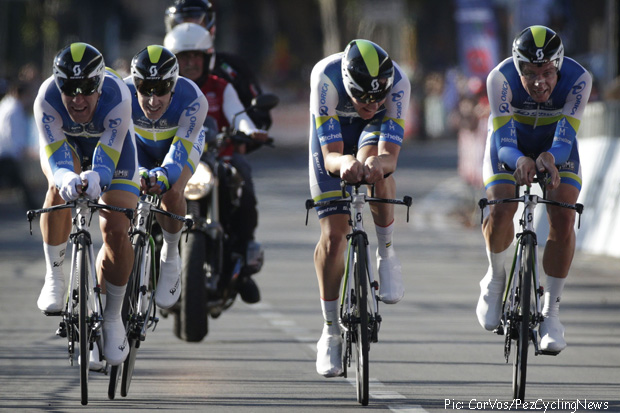 They put 22 seconds into Sky with a short 1:4, just two to come, BMC and QuickStep. BMC are down to four and scrappy – but who can blame them – they pull it together for the finale with the two Italians, Quinziatto and Oss history.

Phinney is impressive, hauling his dying compadres to the line – third!

But Martin & Co. are still to come; the Manchester United of cycling, don’t write them off ‘til that final whistle blows and they have the advantage of time checks as last starters 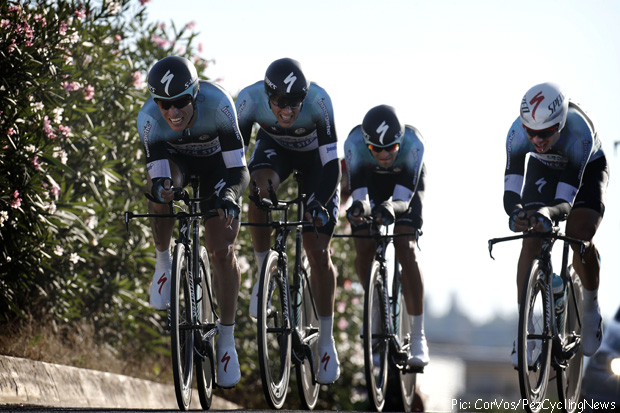 There are just four men left – Martin churns 58 x 11, they spread across the road in best team pursuit style. It’s not even one click of the second hand – 0.81 seconds. But it’s enough the break the hearts of the Aussie team who drag themselves wearily from the hot seats.

In a sentence or two; BMC blow it, Sky keep the sponsors happy, GreenEdge the heroes – and Quickstep? It’s all been said. 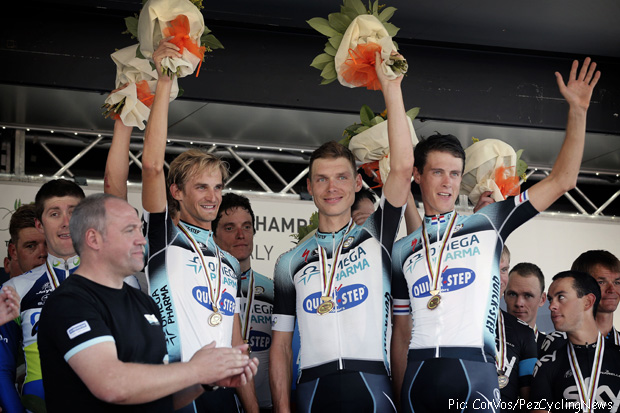