Race Report: As always the young guys kept the excitement going in the individual time trial and today was no exception. The riders just got faster as the race progressed and in the end we had to wait for the last two riders to find out who the Gold and Silver medals would go to.

A battle royal ensued between France, Denmark and Australia, in the end it was Damien Howson who came out on top for the men down-under edging out French hope; Yoann Paillot for the rainbow jersey and the Dane Lasse Norman Hansen took the bronze in a right nail biter!

In the morning the Junior Women’s individual time trial was won by French girl; Severine Eraud, beating two Australians, Alexandria Nicholls and Alexandra Manly over the 15.49 kilometre course. Eraud is the European champion and covered the course in 22:42 and was surprised with the win as she had been well down on Nicholls at the intermediate time check, in fact 13.5 seconds and in fourth place. 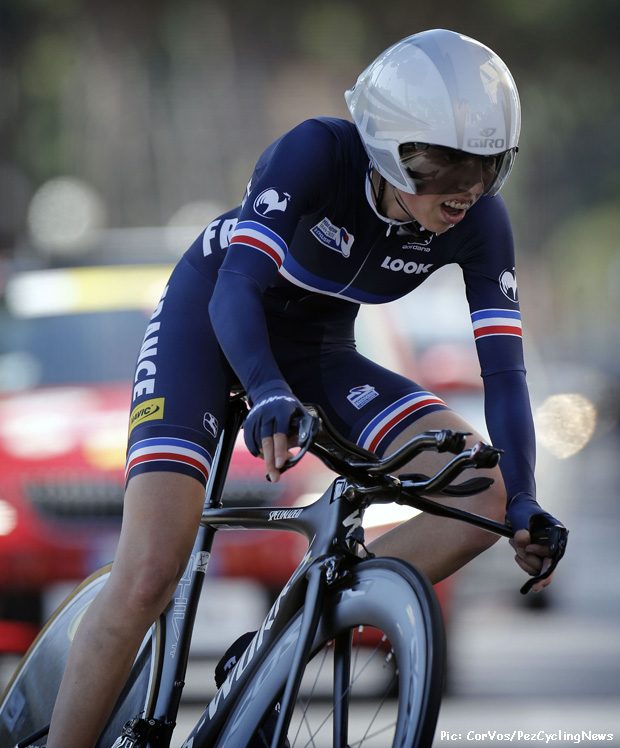 The Men’s Course:
The Under 23 Men’s individual time trial started in Pistoia covering 42.79 kilometres to Firenze on a pan flat course, the start is the highest point at 80 meters altitude, so the biggest climb of the day was up the steps to the start ramp. The last few kilometres were a little technical with a tight left hand bend just before the finish straight, but on the whole it’s a fast/strong mans course. First man of the 74 was off at 14:00CET with practically no wind and blue skies.

The Early Riders
Italian rider Davide Martinelli came down the ramp to a big cheer and promptly lost his race number, the son of Astana team manager Giuseppe was riding well at over 51 kph, but that was only good enough for third at the first time check at 9.7 kilometres. Stefan Kueng of Switzerland was behind Martinelli and he was flying being the only rider (at this point) to be travelling at more than 53 kph.

The Belgian’s were riding well as first; Yves Lampaert and then Frederik Frison recorded the fastest times at the 9.7K time check. Then again at 28K Lampaert was fastest until Stefan Kueng came through with a time of 32:30.06, Frison had slowed and was second fastest. USA’s Lawson Craddock had lifted his speed over the middle section to go top at the second time check with 32:15.49

The First Leader
Yves Lampaert (Belgium) was first man home in a time of 52:27.63, he had caught Viktor Okshev of Kazakhstan out on the course and although he was the first finisher his time stood for a long time. 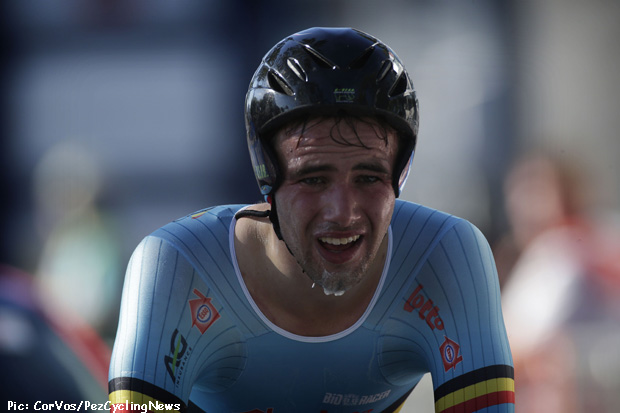 Lampaert certainly gave it his all.

Davide Martinelli pushed hard at the finish, but his time of 53:30.44 was a minute down on Lampaert, not long after Martinelli’s finish, Kueng put in the new fastest time of 51:36.72. Frison had slowed since his fastest 1st time check and put up a time of 52:21.52.

Lawson Craddock had fallen in the last kilometres and was blooded all down his left side with a ripped skin suit; he had lost some time, although he still managed the fastest ride with 51:31.35. He couldn’t take his place in the hot seat due to receiving medical treatment to his substantial injuries; the magic spray was not giving him much comfort.

Out on the course Frenchman Yoann Paillot had posted the new fastest 1st time check (9.7K) with 10:47, next through was Ryan Mullen of Ireland who was second fastest at 10:52. Australian no. 2 hope Campbell Flakemore came through the 1st check with a new best time of 10:46.62 at an average speed of 54 kph.

Bad luck for Jasha Sutterlin as he punctured after about 5 kilometres, the young German will be riding for Movistar next year, but bad luck today meant a bike change and lost time.

Paillot came through the 2nd time check fastest so far in 31:41.17 and was on a storming ride as the last man off; Lasse Norman Hansen of Denmark kicked out of the start gate and at 9.7K the Dane was the fastest.

Flakemore was second fastest at 28 kilometres and next was his county-man Damien Howson with 31:04.88 to go fastest and there was only the Dane Lasse Norman Hansen to come through. He was faster than Paillot, but with 31.37 was slower than Howson.

A New Leader
At the finish Yoann Paillot stamped up to the line for a new leading time of 50:47.08, Ryan Mullen pushed close with his time if 51:37.06, but it wasn’t good enough for a podium place. Flakemore couldn’t push Paillot of the top seat with 51:12.27, it was good enough for second, but there was still Howson and Hansen to come in.

As Howson rode along the riverside and into the technical section he was still in the lead and looking like a champion. Behind him Hansen looked rough in comparison sprinting out of the corners and bouncing on the cobbled section up past the Duomo.

The Tension Builds!
The tension on the faces of the riders on the podium could be seen as they waited for the last two riders to cross the line.

Damien Howson sprinted up the finish straight for the new leader’s time with 49:49.97 and collapsed over the line. 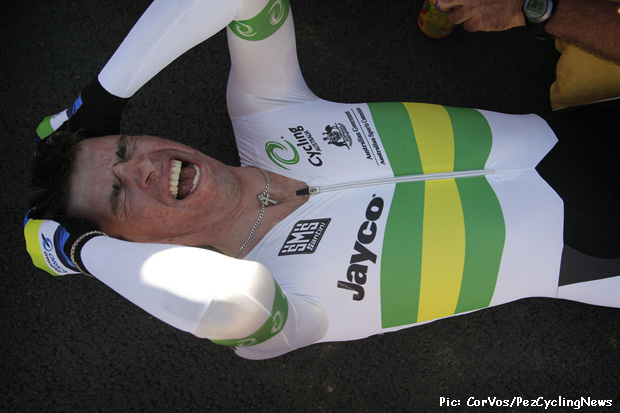 Lasse Norman Hansen attacked the last kilometre, but it was obvious that he was too slow to take the win, but would he get on the podium? And yes the storming Dane does enough for the bronze medal with a time of 51:00.01, pushing Campbell Flakemore off the podium and France’s Yoann Paillot took the silver. 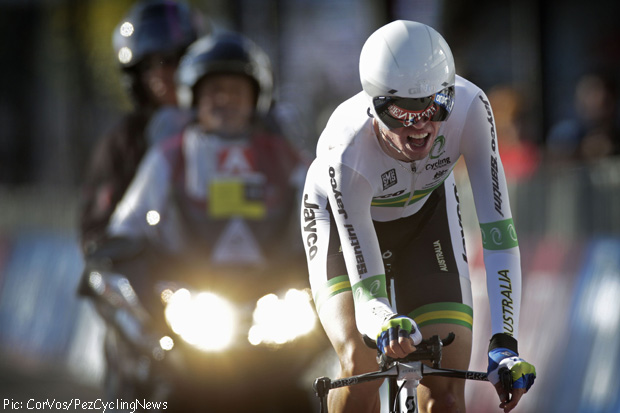 Howson took the third medal of the day for the Aussies but the first rainbow stripes.

Loads more excitement to come from the World’s in Firenze, so keep it PEZ.