Worlds’13 U23 RR: Another Jersey For Mohoric

Race Report: A truly exciting Men’s Under 23 road race came down to who could descend the final climbs the fastest. In the end last year’s Junior World champion Matij Mohoric did it again and flew to his second Rainbow jersey in two years.

The early break rode hard to stay away, but in the end it splintered due to the attacks and the punishing course. Slovenian Matij Mohoric made his move before the last climb to Fiesole, he was caught by Louis Meintjes of South Africa at the top, but his superior descending skills gave him the gap he needed to hold on to the finish. 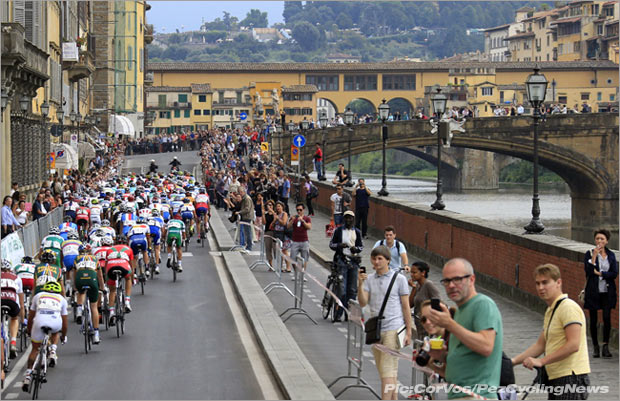 But First – The World Junior Women’s Road Race
Earlier today the Junior Women road race over 82.8 kilometres was won by the Dane Amalie Dideriksen who got the better of her break away companions in the sprint. Anastasia Iakovenko (Russia) took the Silver medal and Olena Demydova (Ukraine) the Bronze. The three had escaped with Jessenia Meneses Gonzalez (Colombia) and Anna Knauer (Germany), they had a lead of nearly 3 minutes at the end of the third lap. Anna Knauer was dropped on the last lap as a group of 20 riders chased hard behind. When they hit the final climb of the Salviati, the Colombian Jessenia Meneses Gonzalez had mechanical problems and the three rode away.

In the sprint Olena Demydova was first to jump, but Amalie Dideriksen came through in the last 100 metres for the Rainbow Jersey. 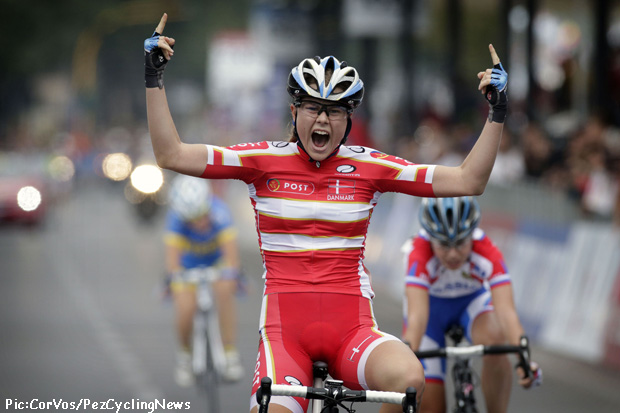 The Course:
The race for the Under 23’s is 172.79 kilometres, the first 57.2 kilometres from Montecatini Trerme to the circuit is fairly flat, the same as the Men’s TT course, then 7 laps of a 16.6 kilometre final circuit taking in the climb to Fiesole each lap. From the top of the last climb there are 10.5 mostly downhill kilometres to the finish in the Mandela Forum. 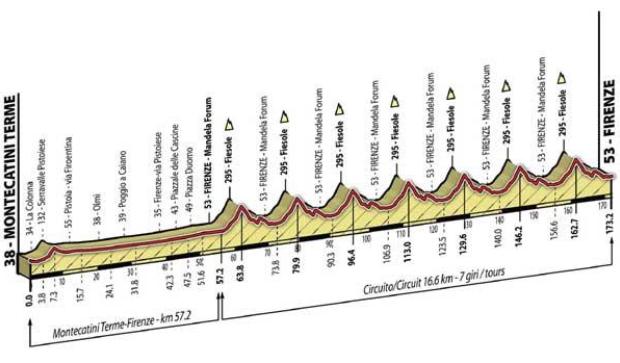 Go from the Gun!
At the start it was a cloudy, but warm 22ºC as they kicked off from Montecatini Terme at 13:00CET. The bunch stayed together for about 5 kilometres before the first attacks came, but as usual the peloton chased down all the moves.

On the little climb Dzamastagic (Slovenia) broke away and was joined by Parra (Colombia), on the decent it all came together. from then on there was a flurry of attacks and chases.

Bostner (Slovenia) and Raim (Estonia) built up a lead of 42 seconds as they were about halfway to the City of Firenze with Sipos of Rumania trying to cross to them. Teshome (Eritrea) and Shumov (Belarus) caught Sipos and then they were joined by Flaksis (Latvia). Behind them the peloton was attacking each other without a concerted effort to bring the breaks back.

Raim and Bostner had a lead of 2:17 on the peloton as the four chasers got within 15 seconds. As they passed through the small towns on the outskirts of Firenze; the six leading riders all got together and extended their lead to over 3 minutes.

After 1 hour of racing the break was looking comfortable with a lead of 3:05, the peloton had eased up and passing through the finish for the first lap of the circuit, the lead for the six up front was 4 minutes 34 seconds.

The First Climb
The Italians led the chase through town as Bostner pulled the break up the first climb of the circuit. At the top Raim of Estonia had been distanced, on the technical decent he tried to regain the leaders and the bunch had closed to a little more than 4 minutes.

On the short, steep climb of the Salviati; Raim had no chance to get back to the front as Teunissen (Holland) attacked the bunch. At the end of the first lap the five had a lead of 3:28 as many nations were attacking up the finish straight. Second time up the climb; the Eritrean rider; Teshome held a steady pace to keep a healthy gap. In the main peloton Belgium, Spain and France were the most active, but still no one team was taking control of the chase, although the lead had come down to 2:05 as GB rider Owen Doull led the bunch.

The start of lap 3 and Bostner, Teshome, Flaksis, Shumov and Sipos had a lead of 2:30 over a compact peloton. Sipos went to the front, but he was trying to dictate the pace as he was suffering and by the top he was dropped, the four crossed the summit 1:56 ahead of an Italian led bunch.

70K to Go
The lead dropped to under 2 minutes and Australian Under 23 time trial champion Damien Howson was on the front. Before the end of lap 3; Van Zyl of South Africa had a short dig off the front of the peloton, this lifted the speed and the gap was down to 1:19.

Up the climb on lap 4 and Shumov was shaken out of the break due to an attack from Bostner. More attacks on the short climb didn’t succeed to in splitting the bunch, but it did keep the speed high. Alexis Gougeard of France managed a gap on the decent.

Lap 5 started with Flaksis attacking before the line causing Tehome and Bostner to chase hard to stay with the flying Latvian. Over the line the three had 38 seconds on Gougeard and Mikelj (Slo) and the bunch just behind.

As the French and Slovenian tandem caught the three, Flaksis attacked, but they were all strong enough to stay together. Italy was controlling the peloton as we now had two Slovenians in the break with Gougeard, Flaksis and Teshome. Gougeard put the pressure on and only Teshome could stay with him on the climb to Fiesole. Next to attack the bunch was Chevrier of France, he was joined by Nathan Brown. The first two crossed the summit with Brown and Chevrier at 9 seconds and the bunch at 20.

On the decent the four were together, Gougeard & Chevrier (France), Brown (USA) and the incredible Teshome (Eritrea) holding on. Up the steep climb and the race was together again thanks to the Australian team as they passed our PEZ man Ed Hood; road side. Dassonville was the next Frenchman to try his luck on the decent into Firenze, he was chased by Sutterlin of Germany, Van Baarle of Holland and Ludvigson of Sweden, they were together as they crossed the line 46 seconds before the bunch with 2 laps to go.

Spain and Kazakhstan led the chase as the Italians disappeared from the driving seat. Ludvigson was in trouble in the break as Dassonville up’s the pace, Van Baarle closed the Frenchman down as did Sutterlin, but the big Swede was lost. Over the top Van Baarle and Dassonville had the lead, Sutterlin at 3 seconds and the bunch splintering at 20 seconds. Sutterlin got back down on the other side. Another French rider, Alaphilippe, shot out of the bunch to drop like a stone to join the other three.

On the short climb; Alaphilippe attacked and the others sat up. The front of the bunch had the Yates brothers of Britain with a mix of other nations on the front. Up to the finish line to start the last lap, Alaphilippe was on his own until 2012 Junior World Champion Mohoric of Slovenia crossed over to him, with what was left of the bunch behind at 33 seconds

The Last Lap
Alaphilippe and Mohorik started the last climb to Fiesole with a lead of 28 seconds. Italy appeared at the front again with three riders to pull the race back together; Australia also had men next in line at the front of around 35 riders. Villella (Italy) attacked from the bunch, but it was too early and he was pulled back. Next to try was Meintjes of South Africa and he caught and passed Alaphilippe and closed on Mohorik at the top, with Brown (USA) third over the line at the head of the shattered bunch.

Mohoric blasted down the hill dropping the South African and looked good for the win with 6 kilometres to go. On the Salviati the Slovenian was suffering, but he had 8 seconds on Meintjens and the chasers at 20. Crouched over the bars and pedalling at the same time the Slovenian was holding the gap into the last 3 kilometres. Up the little rise he sprinted full out and into the twisty streets to the finish.

Matej Mohoric passed under the 1K banner with enough of a lead to start to believe he could do it, in a TT position he powered towards the line for his second Rainbow Jersey in two years. Holding his head in disbelief the tall Slovenian eased his way across the line with Louis Meintjens still alone just behind him; Sondre Engers (Norway) took third from the bunch. 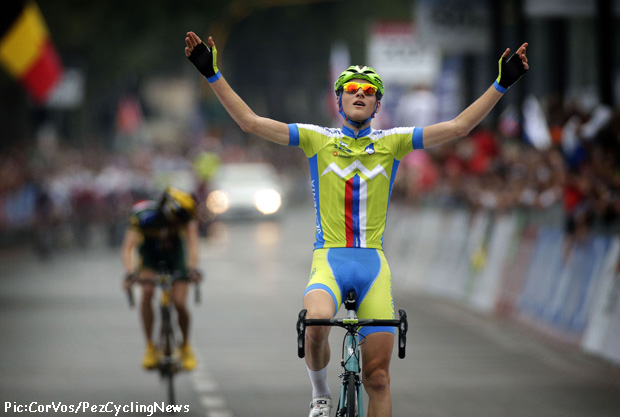 Matej Mohoric said at the finish: “I didn’t know what to expect as my time trial wasn’t so good. I still don’t believe what happened.” 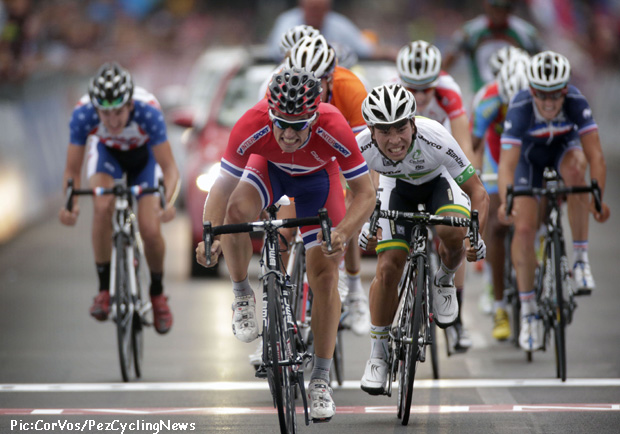