With the light fading fast on a perfect Tuscan Saturday afternoon, The Netherlands’ Marianne Vos confirmed that she’s the queen of women’s cycling – successfully defending her title and winning alone in the grand style. Emma Johansson was second for Sweden with Italian girl Rossella Ratto taking bronze. Here’s how it played out…

I can’t handle the press centre for too long, though – especially now the sun is out.

Mathieu fans are already celebrating – and it wouldn’t be an orange celebration without an oom-pah band. 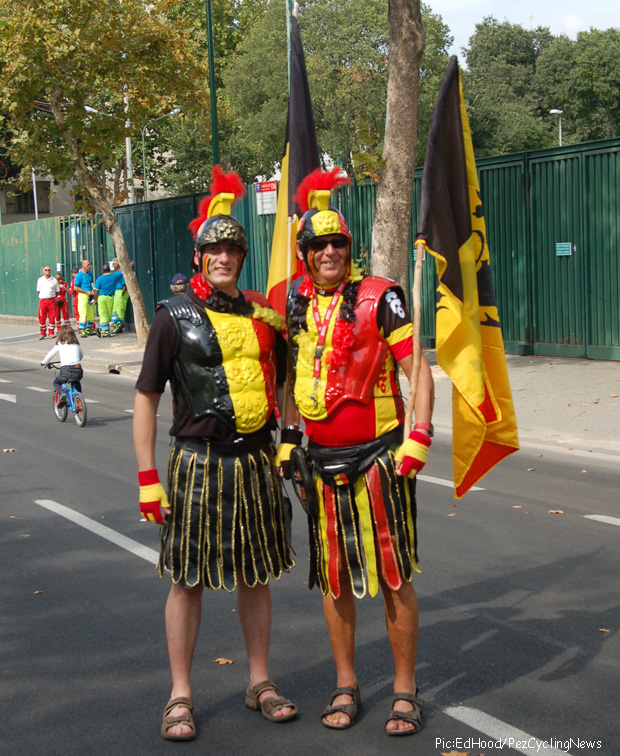 And there’s the Belgian Legionnaires, the last time I saw them on duty was at Valkenburg 2012. The Pezmeister and I have decided that the circuit may be tough – but it’s not photogenic. There are too many apartment blocks, high walls and trees – very little of that Tuscan Renaissance vibe.

We decide that I’ll hike the road which brings the riders onto the circuit from Montecatini Terme through Florence, in search of photo ops. 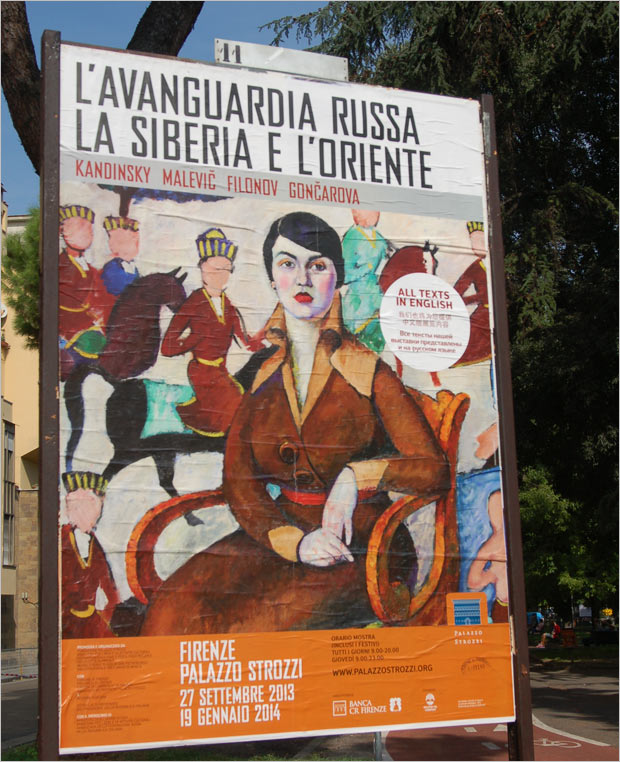 But the Nikon remains in my bag – except for a snap of a beautiful exhibition poster – as I walk endless, bland straights before arriving at the river Arno – where there are still few pictures to be taken. 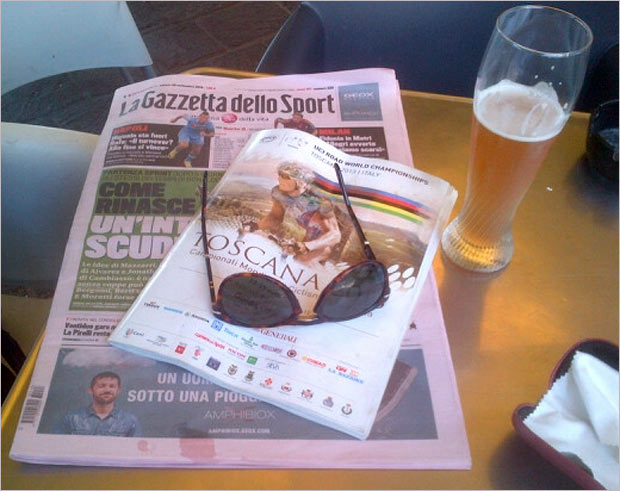 But there is a Gazzetta, a seat and cool beer at a bar with a big screen TV – nice! This could be it for the day? The Gazzetta gives Mohoric’s U23 victory a corner of a page and Brian Cookson’s ousting of Pat gets an airing – but this weekend is about one thing.

The Azzuri winning tomorrow is all that counts in these Worlds. There’s the inevitable Gazzetta stats – this will be Pippo’s sixth Worlds, with a best of fourth in Geelong in 2010.

It’s five years since we had an Italian champion – Ballan, Varese in 2008. Italy has won the Pro/Elite Worlds 19 times, Belgium 26 times.

Up on the TV it’s compatto – now there’s a surprise – but the hills on the circuit will sort that out.

They’ve also revised the gradient for Via Salviati to 18% which seems more realistic than the 16% in the race guide. Best not have a second beer or, I’ll be doing the rest of today’s rant off that TV. 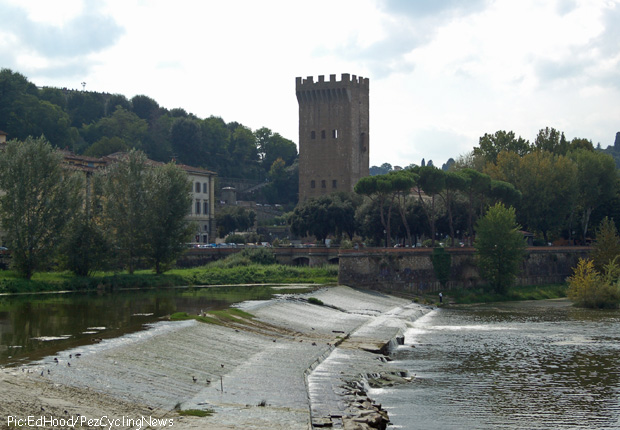 At last all that walking is rewarded as the Arno tumbles down a weir and gives me something to take pictures of. 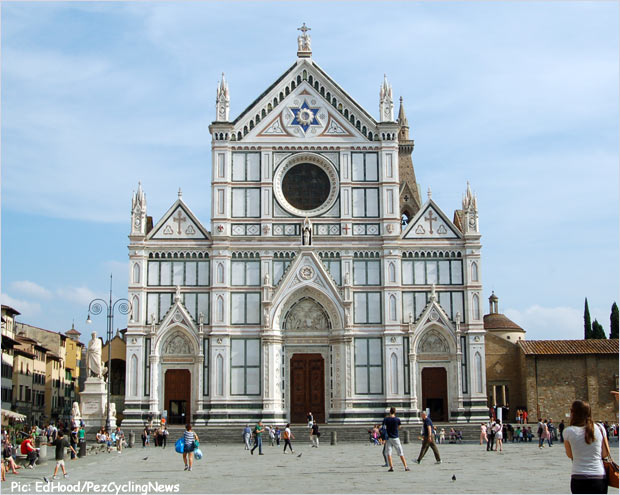 After an interminable tramp along the Arno, the percorso heads back into town and those photo ops just keep coming, there’s the church of Santa Croce; our first sight of the massive and magnificent Duomo and the Campanile which counter points it.

And it’s nearly race time – too many motorbikes, helicopters, more motorbikes and here they come…

In fairness to the ladies, it’s no Copenhagen club run, they’re rattling through the heart of Florence at a respectable lick. 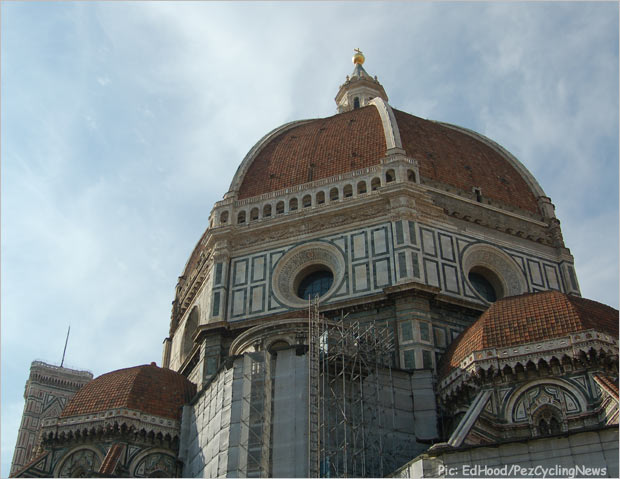 The Duomo may look amazing in the distance but close up it’s a disappointment, ravaged by pollution and pigeons and wearing the inevitable scaffolding. 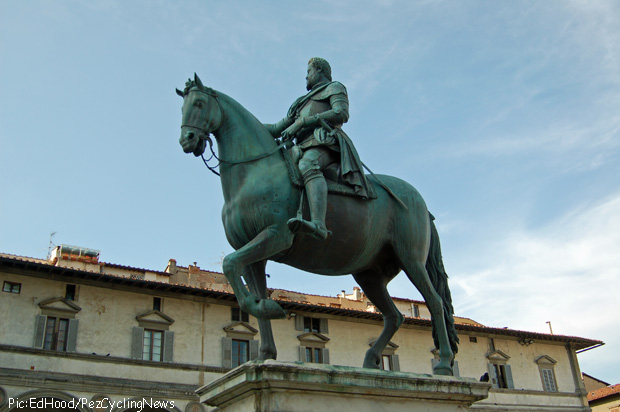 But now it’s time to forget architecture and history; I have to get to back to the circuit – taxi! But not before I have a Moretti – Nico Mattan always swore that beer was more effective than those fancy electrolyte drinks . . .

I’ve learned through bitter experience that you’ll never get a hotel room in Pisa unless you’ve pre-booked. And I now know that cabs in Florence on a Saturday afternoon are in the same vein. But the nice guy in Café Principe, as well as making great coffee has good contacts in the world of private hires. There are two laps to go when I settle into the press grandstand.

Lucinda Brand is clear for The Netherlands with Azzuri, Rossella Ratto – but it’s not a big gap.

Both are doing a job, Brand for ‘SuperVos’ – as the Gazzetta calls reigning 2012 Valkenburg and multiple ladies world champion, Marianne Vos – and Ratto working for 2011 Copenhagen World Champion, Giorgia Bronzini.

The group is maybe 25 strong with both of the aforementioned ladies in there along with the likes of Olympic silver medalist, Lizzie Armistead (GB). Vos trains with the Belkin pro team whilst Armistead trains with partner, BMC sprinter Adam Blythe and the like of Phil Gilbert from her Monaco base. There are three Poles in there, too and strong Aussie and US girls.

On the Salviati for the penultimate time it explodes – but they lead girls don’t press on over the top, they sit up, drink, why? Despite their hesitation, this is the race, maybe 10 girls; three from Italy – but Bronzini has gone; two from The Netherlands – with SuperVos right there. I don’t see Armistead but strong woman Linda Villumsen is there for New Zealand as is Aussie, Tiffany Cromwell.

There are more casualties on the Fiesole but Vos waits ’til the last time up the Salviati to fire the boosters. The commentator starts comparing Vos to Eddy Merckx – steady there, dude! 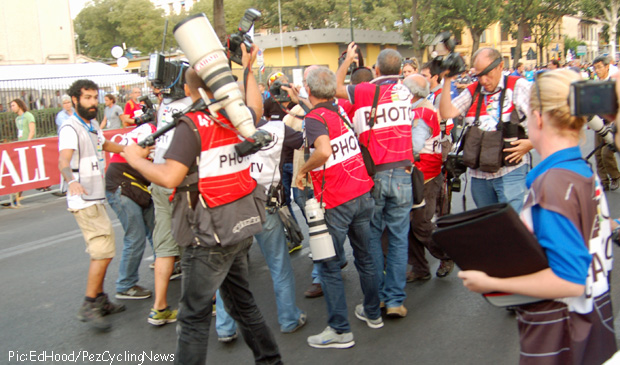 Vos emulates U23 winner Mohoric to win ‘en seulle’ – and the press scrum around her as she makes her way to the ‘controle’ is just crazy. 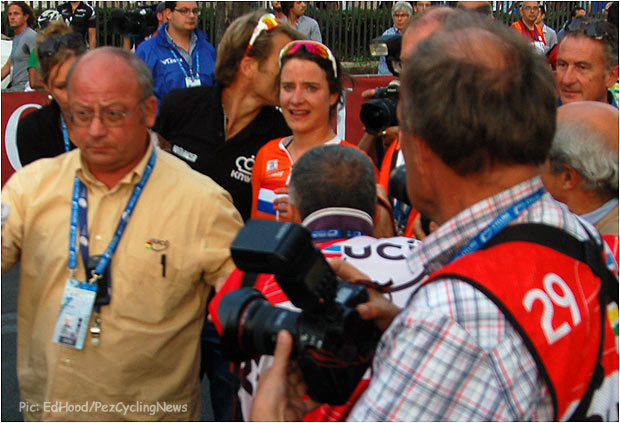 Once the UCi guys fight a way through for her you can see she’s a little distressed with it all. But that won’t last – she’s champion of the world, after all.