It’s not been a bad old year for BMC and Switzerland’s 23 year-old Silvan Dillier. In the spring he took the GC in the Tour of Normandy by a scant three seconds from 2011 winner, big Alex Blain (France & Raleigh). Then came wins in a stage of the the Tryptique Ardenaisse and in the Fleche Ardenaisse – both important races on the Belgian calendar.

It was inevitable that BMC would give him a stagiaire place on their World Tour team after his excellent results for their development squad – he repaid their faith in the best way possible with a stage win in the Tour of Alberta. A full contract soon followed. 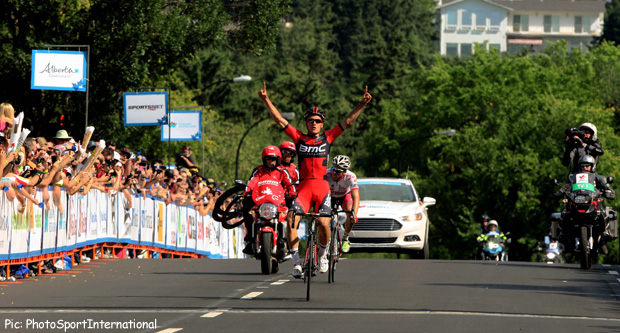 Silvan taking his win in Alberta during his successful stagaire stint with BMC.

The young Dillier showed early promise with a Swiss national title in the novice’s road race in 2006. A year later he was winning stages in the Junior Peace race and Junior Tour du Pays de Vaud.

In 2008 he took national junior titles in the time trial and omnium – and won the Zurich UiV race (U23 six day series). A year later he was national U23 road race champion and the following year national U23 time trial champion.

Last season saw him second in the Berlin Six Day and national U23 road race, win the U23 time trial title again as well as the European U23 pursuit title and a stage in the Tour de l’Avenir; not forgetting third in the Gent Six Day. He was in the Swiss squad which took silver in the Mexico round of the World Cup in January of this year before the build up for his excellent road season began.

We caught up with him just a day or two after his Zurich triumph.

PEZ: Congratulations, Silvan but it must have been tough going straight into the Gent Six Day, what sort of preparation did you do?
After the World Cup in Manchester I wasn’t so happy with my performance so I changed the plan of my training and did some good workouts at home to get in shape for the six days. 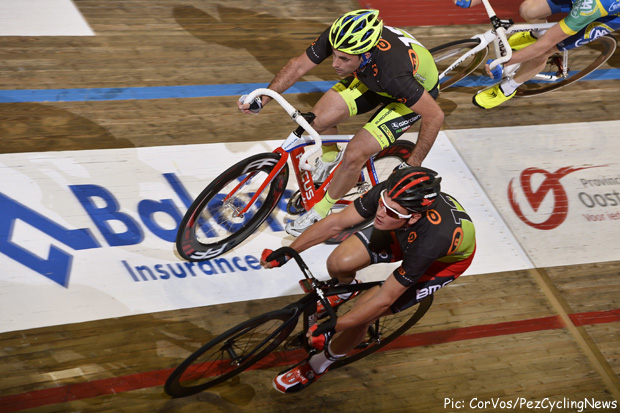 In action at the Gent Six with Tristan Marguet.

PEZ: What did you do between Gent and Zurich?
We travelled straight home after the last chase in Gent, so I had about two days at home which I used to recover.

PEZ: How important to BMC is the Zurich Six Day with it being a Swiss company?
BMC is also a big supporter of the Swiss National Team and I guess they are happy if their bikes compete for a six day win.

PEZ: How does the Zurich track compare to the Kuipke in Gent – do you gear differently?
Kuipke is a really short track, 166metres but Zurich is not much longer at 200 metres. There were guys who put a bigger gear on for Zurich but I was fine with my 50 x 15 gear.

PEZ: I heard there were lots of punctures on the first night at Zurich?
Yes, it’s possible that a few guys had a punctures, but I was lucky and had no mechanical problems the whole race.

PEZ: What were the crowds like?
For a Swiss guy the crowd in Zurich is amazing. But they also really liked Iljo, too – so always when we were trying something on the track, we had the public behind us.

PEZ: Iljo – what was it like to ride with him – his changes look so powerful.
It was a pleasure to ride with him. He reads the race so well and he motivates you to ride well. Whatever he does, he does it correctly and in a professional way.

PEZ: I saw you were on a BMC ‘Trackmachine’ in Gent – I think last year you rode a ‘Timemachine’ with track ends – how do they compare?
BMC now builds special track bikes. I rode the TR02 – It’s an aluminium frame but almost as stiff as the carbon track bike. For me and even for a lot of my competitors it was the nicest bike on the track. 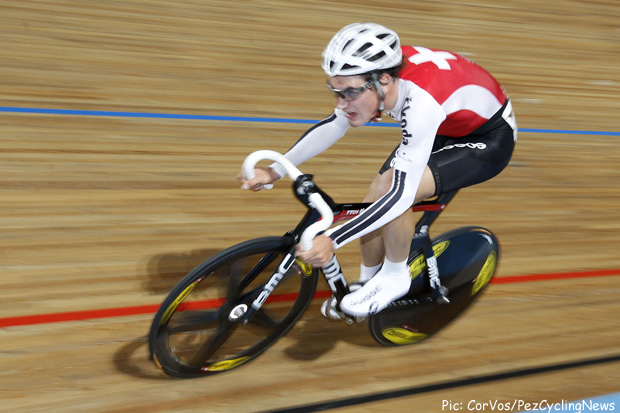 PEZ: Iljo said that night three was very tough.
Every chase was hard, because the track is so fast. At the third night we had a handicap americaine (madison) of 300 laps – Iljo and I started on minus six laps!

PEZ: I believe it was late in the day when you took the winning lap?
About 15 laps to go in the finale chase we attacked and made the winning lap with about 1,000 metres to go. At that moment it was too late for de Ketele and de Buyst to follow.

PEZ: The Spaniards Muntaner and Torres were third, a bit of a surprise?
The Spaniards are really strong. They ride a bigger gear and have the power to manage that – if they’re in their rhythm it’s hard to follow them.

PEZ: A hard race for world champions Kneisky/Brisse – six laps back.
I heard Kneisky is having an operation on his knee this week – so probably this was a little handicap.

PEZ: What’s your next race?
With Zurich I finished my track season. My next race will be on the road in 2014, but I don’t know which one yet. 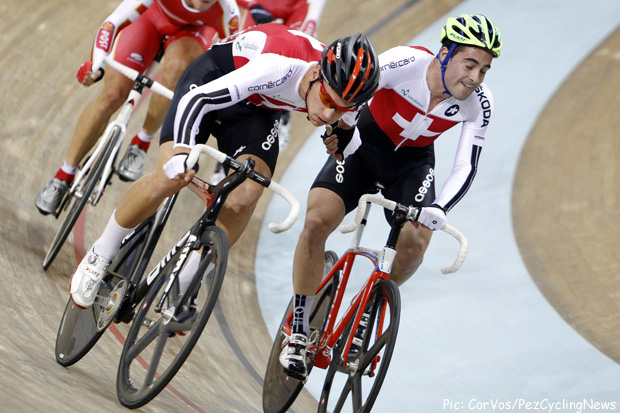 Silvan Dillier and Tristan Marguet pictured during the men’s madison at the World championships in February.

PEZ: When and where do you have training camps?
I will go for the first camp to Spain next week. Then we have a few other camps in January and February but it all depends on the race program which I’ll find out about at the camps.

PEZ: Will you continue to be based in Switzerland or head for Spain or Italy?

For the moment I will stay in Switzerland – here I have my friends and family.

PEZ: Do you think the UCI will let you try one of the BMC Stromer e-bikes to race on?
This would be nice for me, but really unfair for my competitors – I’ve never seen a more powerful e-bike.

Lotto Belisol: IJsboerke back in the peloton!