– By Rusty Beall of Team Health Net – This last weekend was a busy one for all of us involved with the Health Net Cycling Team, with our official team presentation and press conference last Monday at the Claremont Resort and Spa in Berkley, California. 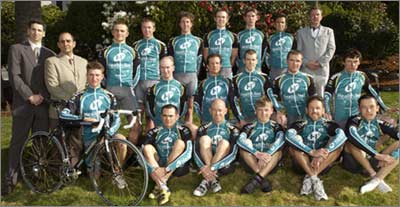 Team Health Net met the press on Monday, showing off their new team kit. Watch for the full story at PCN.

It has been about three weeks since our last — and first — meeting, so we were told to meet in Sunnyvale at our assistant manager Bob “the bearded one” Hook’s house on Saturday for some training, clothes divvying, and burrito consuming. When we got to Bob’s house, his place looked like a gypsy bazaar with clothing everywhere, guys adjusting their bikes, bottles being made, and English, Belarusian, and Polish being spoken; you’re basic complete and utter chaos.

When we finally embarked on our training ride, which ended up being a hundred-twenty-miles and six hours from Sunnyvale, down the coast to Santa Cruz and back through the hills, we sure looked a hell of a lot different than we did those three weeks ago with everyone on a different bike and in a different kit. There’s something to be said for uniformity, we actually looked like a bike team. Heading into Santa Cruz we had a scare, when two coeds walking down the street decided to flash us. We were doing damn near 30 MPH and I was just waiting to hear the sound of bikes on pavement, but thankfully that didn’t happen.

Dimitri, the team coach had decided from the beginning that he wanted to see some of how everyone was riding, and so, on the longest climb of the day, Mike Sayers yelled to pick things up. For me personally, it was not one of my better moments. I had snot bubbling out of both nostrils, legs full of lactic acid, and a heart rate above 190 (for the first time this year) before we reached the halfway point of the climb. Alex Koslov put it to us, riding away (from what I am told) from the rest of our now scattered group and making it to the top with the form of a fit, lactate tolerant man. I guess all of that motor pacing through the snowy fields in Belarus is paying off for him — Note to self: take it easy on those Guiness floats this next off season.

Monday began with our assent on the Claremont for our press conference. After a nice little breakfast, we all took to our kits and assumed the position on the grass outside of the hotel for team photos. Despite all of the urban legends being passed through our photo lineup of what some of our teammates of the past have done — or rather, have whipped out — for team photos, never to be caught, and with Kevin Klein (our manager) sulking at the fact that some of us never got our hair cut or SHAVED our beards (long live Bobke!), the photo shoot was the shortest and most painless I have ever been through.

After a clothes change, it was up to a conference room for our press conference, which had an enthusiastic response from the local press and a bunch of excited sponsors. This team was geared toward a group that would be able to perform well in stage races, so that is where most of our emphasis will lie. Kevin Klein has made it evident that Sea Otter, Philly, the L.A. Grand Prix, Cascade and, of course, our hometown race the San Francisco GP are our main goals of the season. It will be difficult to compete on an equal footing with teams like Saturn, Prime Alliance and Navigators, so we will be looking for stage wins and will not be a pacifist team waiting for an opportunity to make itself.

Having had experience with another first year pro team with Prime Alliance, in 2001, I have seen what it takes to have a winning program. Greg Raifman and T. Attias the two owners of the team have aspirations and see no limits in taking this program as far as it can go and Kevin Klein and his wife Jane are working so hard to make everything as easy as possible for the riders. Kevin makes it clear that we don’t have the money of the big teams, but we have some great riders and a team bond that goes beyond just the races… and that’s important. As one who’s been there before and seen a program grow, I’m telling you the Health Net Cycling Team has all the right ingredients for success. We’ll see, the season starts this weekend.

Homeboy: In The Money