Gutter: Getting Over Gila

It has been a little over a week since Tour of the Gila has ended and my body is still loving the return to an oxygen-rich 700-foot elevation, where I can splash and swim in the air it’s so thick. I’ve always enjoyed my time in Silver City, New Mexico (which sits at 6,000 ft.), but my body has voiced different opinions over the years on how it wants to perform between 6,000 and 9,000 ft. One year I’ll feel like shit and the next year I’ll feel so good I may as well be racing at sea level; it’s always a roll of the dice. 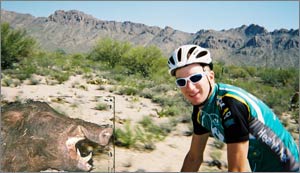 This year was one of the tough years, where I was breathing out of all of my bodily orifices and enticing myself to go faster in a time trial where my entire left leg went numb by pretending that a herd, a gaggle, or is it a pride (?), of Havolina pigs were chasing me down, hungry for some “Rusty bacon”. But, even the thought of tusked, hoofed creatures chasing my skinny ass down and devouring it in barbaric fashion was not enough to make me go fast. I still sucked, but I guess that’s part of what makes Gila epic.

It ended up being a tough week for many of us, doing battle each day with the Trek/VW All Stars and Drew Miller and his Landis team, fighting over who would have the G.C. lead. In the end, after many well fought days, and a well deserved win, it was Drew Miller winning his second stage race in a row (he won La Vuelta de Bisbee the week before). But I will go ahead and set the record straight and say that the race may well have been more exciting had my teammate Mike Sayers (in 2nd overall at the time) not had a flat tire on a climb about 15 miles from the finish on the last day and received the dreaded 45 second wheel change.

Kudos to Drew and his boys though, they deserved it. As for our Mexican buddies on the Tecos team, you guys really shouldn’t have been celebrating this Cinco de Mayo after the way you guys raced at Gila. Following wheels and refusing to take any initiative all week is not the way to try to win a race, this is bike racing, not line dancing.

The rest of our time in Silver City consisted of doing a lot of eating and sleeping. It is not a place like Tucson, where you can head to the local cafй, put on your dark sun-glasses and enjoy the “local scenery” while you sip on your coffee. Instead we would wait in anticipation of how my new teammate Todd Hariott would rate the coffee (three parts ass being the worst possible and “assless coffee” being the equivalent of a 4-star cup of joe) and watching Chernobyl-like, Cocker Spaniel-sized jack rabbits hop by. Being from New York City, I think Todd was going through a bit of culture shock.

Since the end of Gila I have spent more time in the car than I have on my bike. I drove from Tucson to eastern Washington via San Francisco in two days, which left me feeling like a chain-smoking heroin addict for a couple of days. But I’ve started getting in some good training days at home, riding from my house in Washington down into Hell’s Canyon and up to the Oregon side. It is a beautiful ride, with about 12,000ft of climbing and is just what the doctor ordered in preparation for the 156-mile death march we know as Philadelphia. But next up on the agenda is the Ecology Center Classic in Montana starting on the 23rd. Yee-Haw.

Rusty Beall rides for the Div. 3 Team Health Net, based in Oakland CA. Check out their website at www.mosportsgroup.com

Learn more about Rusty in our About Us section.