The alarm goes off and there is that moment when you are not sure where you are. Then it all slowly comes into focus, 5.45am and time to get up for the 9th Amateur Grand Prix Plouay. Being more used to racing in the afternoons (as done for the majority of the season) this is an early start. On auto pilot I move into the kitchen. Before I know it the coffee is on, and my mind now focuses on the race in just over 3 hours time.

Brittany has been called the Belgium of France in regards to the tough amateur racing and passion that the locals show towards cycling. Many of the greats of cycling have originated from here, and / or cut their teeth with the racing. (Bernard Hinault being one of the most famous Breton cyclists). In my 6th and final year racing in Brittany I leave the apartment whilst the day was just getting light, direction Plouay for some aggressive racing on a hard circuit. 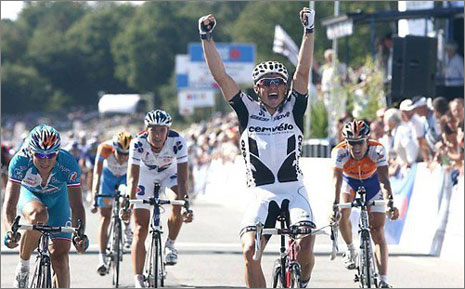 The Grand Prix Ouest France is a one day Pro Tour event in the town of Plouay. Plouay is synonymous with cycling in France, with the first race being held here in 1931 and the 2000 World Championships, so has a great pedigree. There is a full weekend worth of events, a cyclo sportive on the Friday, amateur race on the Saturday morning, followed by the women’s World Cup event in the afternoon, all of which build to the pro race on the Sunday.
7.30 am and the pre-race routine is in full affect. Numbers, bike, bottles, race food and then warm up. This is something that at this time of the season you can do with your eyes closed. 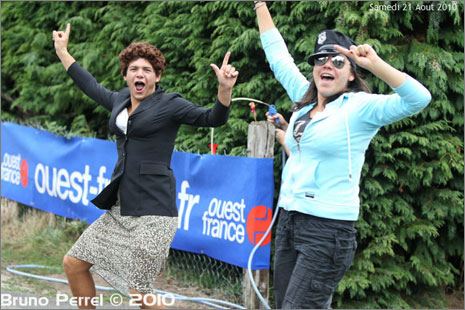 The amateur event involves 7 laps of the 19.1 kilometre circuit, making for a total of 133 kilometres. Each lap contains 3 climbs which makes for a brutally hard race. In terms of importance, winning pretty much gives you a free ticket to turn pro (with 6 of the 7 past winners doing so). 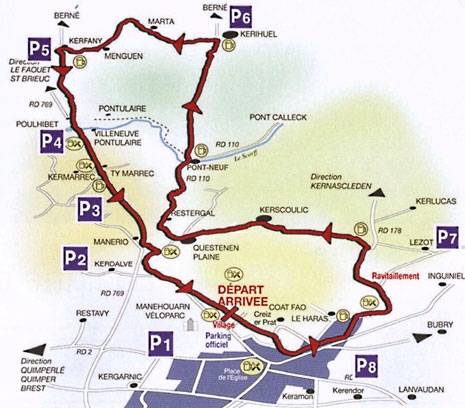 160 riders wait with tension on the start line for the 9am start. It is a very high quality field with the UCI Cycling Centre making the journey to Brittany to race, as well as all the top riders from all over France. Under a rain bearing sky the start is given. There is no roll out like the pros, this is amateur racing, no holds barred, by the first corner 200 metres from the start the pace is already flat out. These boys are hungry and aggressive to race the full distance. 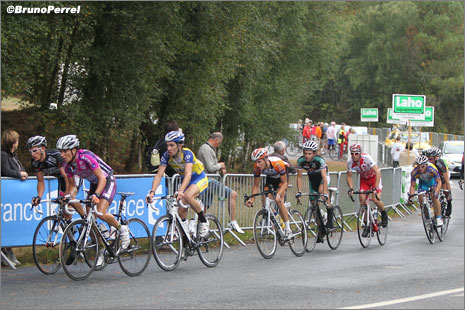 In the gutter Brittany bike racing at it’s hardest and best.

Knowing full well how fast the start would be I placed myself well. It is always a shock to the system, zero to 100%, but the body starts to settle to the effort and the brain starts to watch and plan for how the race will pan out.

After a couple of kilometres point the break goes. 15 riders go on a small false flat. There is the moment of hesitation and the gap is made. Riders who want to go are blocked by the riders who do not. The race starts to take shape. 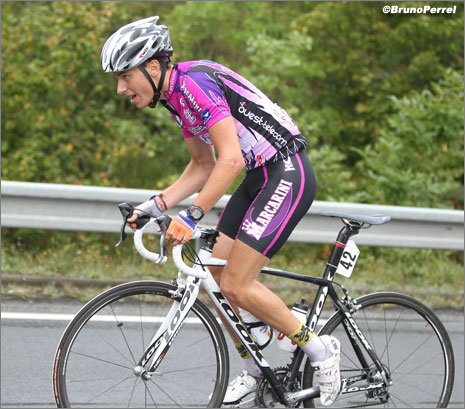 We hit the second climb on the circuit and the race explodes into numerous parts. The stronger riders jumping to get a gap, other riders who want to survive begin to feel the pace and gaps start to appear. This is just the first lap.

I bridge across to the counter attack followed by a rider from the UCI cycling centre team. There are 3 of us from Hennebont Cyclisme (the team I ride for) in this group of 30 riders. We do not have a rider in the lead group, so need to get one there asap. 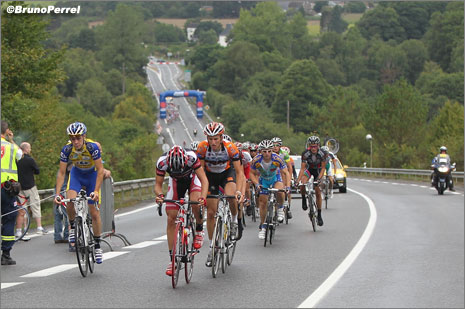 The lead group hit the last climb of the first lap, the mighty Ty Marrek, peloton in the distance. 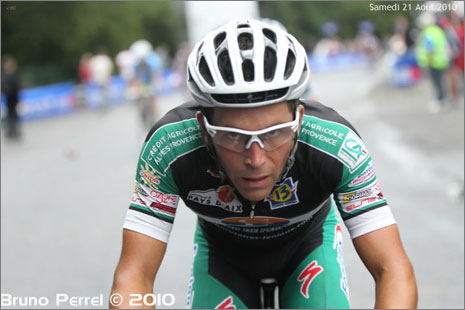 Lap two and the pace is still flat out. The top riders want to make this a selective race. I am suffering from stomach cramps so decide to force a counter attack in the knowledge that I will probably not get around to the finish. Riding on the front for a few kilometres to limit the attacks, I sacrifice myself knowing when my pace slows riders will start to jump again, hopefully one of my two team mates will be in the group that goes. Well into the red and suffering I swing off, as predicted the attacks begin. I am happy when I see a team mate heading up the road and back to the lead group. I attempt to struggle on, but the cramps do not ease.

As the race progresses the groups get smaller and smaller. I am by now watching the race in the feed zone with the team. Stomach cramps caused an early end to my day; just another less than perfect performance in what is a far from perfect year, the only positive is my team mate who has joined the leaders.

Watching the race you see the effort and the speed of the riders. With this pace, on this circuit, the strong and aggressive naturally gravitate to the front. A peleton has formed of riders who want to finish, under no illusion of a result they tap around, eventually finishing 17 minutes behind and “Hors Delay”. 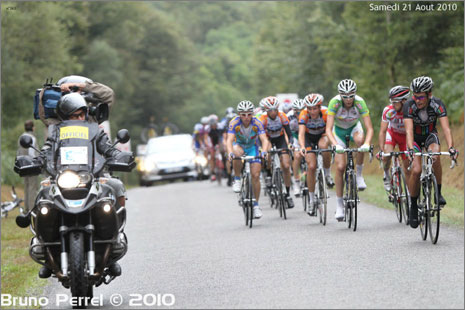 A camera bike relays live pictures back to the big screen at the finish line. 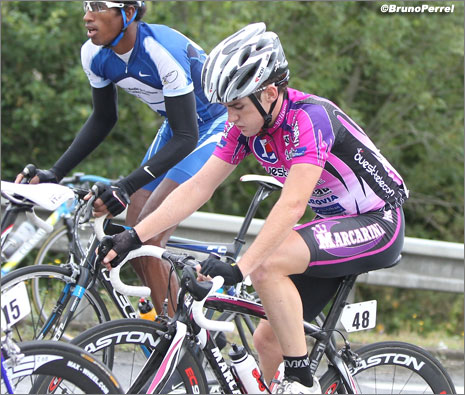 Team mate Jeremy Loric starts to show the strain of the race.

On the last lap the original group of 15 riders have been joined and has re-split. On the final climb up the Coat de Ty Marreck 3 riders attack for the win. As they come into the finishing spectators have already filled the natural grandstand and are banging on the publicity banners on the railings. The noise makes the hairs stand up on the back of your neck. 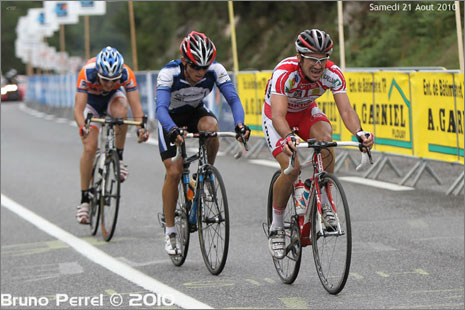 Three riders escape for the win. 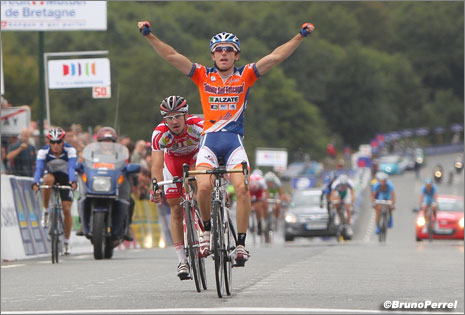 Only one rider get the pleasure of raising his arms in glory. 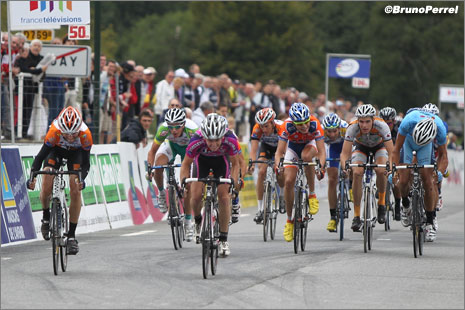 The sprint for the minor placings.

Damien Branda crosses the line to win. Second is Julian Guay (recently finishing second in the French Amateur road race championships). Gregory Brenes of the UCI Cycling Centre team fills the last spot on the podium. The faces after the race show the full emotions of the riders. 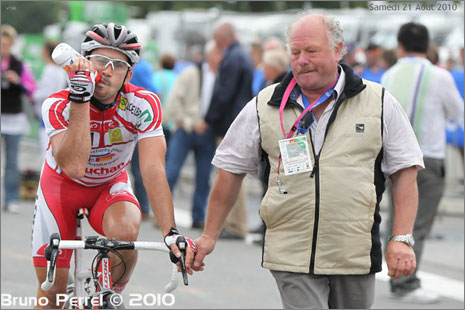 Second is potentially the worst place. 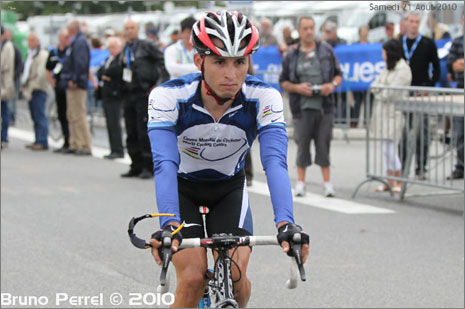 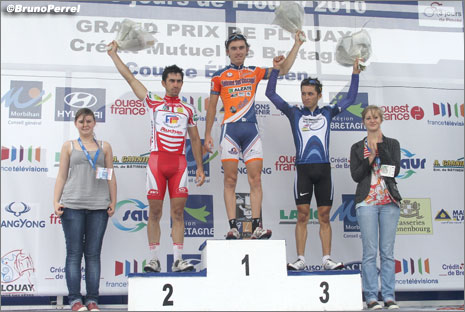 The Breton fans have had a spectacular race to warm them up for the following events. They have a few moments to grab a quick gallette saucise before the Women’s World Cup begins. 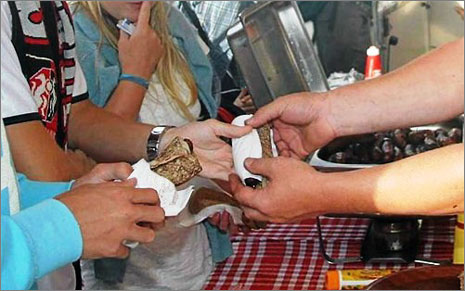 13.00, racing over I head back to Hennebont and my apartment. Tomorrow is another Elite race so I pop on the TV to watch the women suffer as us amateurs did.