My last writing/riding report was from a vertitable mecca in American cities for cycling; the Denver/Boulder area. After the article ran for a while, I received some interesting emails from the Pez faithful, one of which I thought inherently coincidental. This particular reader was espousing the virtues of the US’s midwest cities, primarily Madison, Wisconsin and was wondering why I didn’t take some time to write about the area, little known for it’s cycling potential. Oddly enough, I grew up 2 hours south of Madison, in a podunk town on the south side of the Illinois/Wisconsin border, and had raced around cheeseland (as Wisconsin is known, for it’s prodigious cheese output) for a few years and had, in fact, recently moved to Milwaukee, Wisconsin. So, in giving the Pez readers what they want, I give you the first glimpses of an Illinois transplant riding the greater Milwaukee area.

Now, to understand the gravity of the treason involved with moving here, one must understand the very tenuous relationship that exists between my home state and my newly adoptive state. Most of the animosity has to do primarily with driving ability and football teams, and people take it to varying degrees of derogatory nicknames, but all in all, it is an uneasy truce at best. At one time in my life, I, too, as a native Illinoisan, harbored an inbred contempt for my northern neighbors, and weilded my middle finger with reckless abandon at Wisconsin drivers. But now, having lived here for a few months, let me be the first to be, through the conduit of cycling, the two wheeled Rodney King and pose the question: Can’t we all just get along?

First things first: Milwaukee is a beautiful city. Old brew town gets a bad rap in the pantheon of American gems, but I have to say this place is the midwest’s best kept secret, even aside from cycling. A beautiful lakefront, ample roads with spacious lanes are very bike friendly along the east side, and dedicated, well kept paved paths line the lakefront itself. While in the city, most of the major streets have dedicated bike lanes, which warms my heart to no end. And when I say bike lane, I don’t mean the piddly 1/2 meter wide strip you see in some cities. In some spots in Milwaukee you get 2 or 3 meter wide lanes, especially on bridges. And it’s legal to ride 2 across here as well, another nice feature. You want country? Ride 20 minutes north of the city while warming up and you got it. Urban riding, of all sorts? Head for downtown. Wanna do hill repeats, but not travel to them? Just go to any number of paved climbs from the shores of Lake Michigan up the bluffs. Most are short, steep, paved and switchback-laden, so you can get sort of that Alp d’Huez feel. 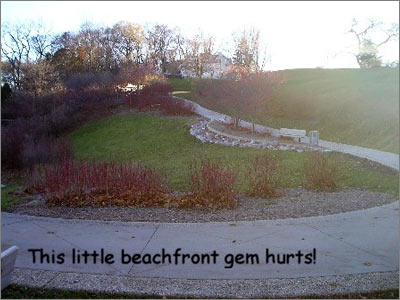 When I first came here, I was surprised to see so many cyclists of so many disciplines out and about, along the magnificent Lake Drive, and the connecting Lincoln Memorial Drive. Commuters, senior citizens, racers, families, you name the type, they were out there. I little further into the city from the lake is where you see all the students, (Milwaukee is home to two major colleges, UWM and Marquette) and the couriers rocking the single speeds. Let it be known as well that a few pros call this home, or at least they used to. Jonas Carney still lives here, though I have yet to see him, and Mrs. Dede Demet-Barry is originally from this city, and I did have the pleasure of running across her and hubby Michael out training sometime around the Christmas holiday, must’ve been here seeing her family for the holidays. Mike’s looking good. Dede is too. Lake Drive is the place for cyclist sightings. 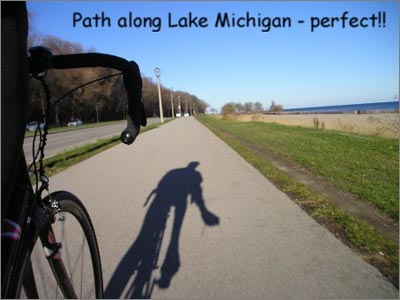 And with many disciplines come many bike shops. From high end places to village pedaler type places, to everything inbetween. The Rainbow Jersey (whose wrench Andy beat my eyeballs in at a crit last year www.rainbowjersey.com), Benz Cyclery, Bikesmiths, they come in all shapes and sizes. One of my new found riding partners is young Christopher Kreidl (www.onegear.com), wrench at The Bikesmiths shop (www.thebikesmiths.com), student, indie music fan, track rider, and quite a chippy little sprinter as well, handing me my lunch at several town limit sign sprints. “The way this city is designed, you can get anywhere in a short amount of time”, says Chris. As for the racing scene, “Between WORS, (Wisconsin off road series, www.wors.org -ed) and Superweek, there’s something for everyone.” 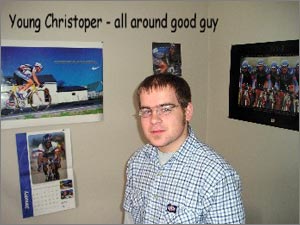 Of course, you can’t mention Milwaukee in a cycling sense without mentioning the suffer-a-thon that is Superweek. A goofy almagamation of road races and crits that will make a lot of riders sterile through repetative beatings. The greater Milwaukee area, and Wisconsin in general, offers a wide variety of riding terrain, and hills are prevalent here. Just outside the city are where most of the races take place, with a few being in Milwaukee proper, all of which are challenging. I’ve participated in a few, and have a rudimentary grasp on the suffering. More can be learned of this deathfest at www.internationalcycling.com . It’s quite a sight: retired Euro pro’s, young Cat 4 and 5 whelps, women, and every class inbetween gets opportunitues to race. Indeed the midwest’s finest group of races in a two week period.

I must say I am quite pleased with my new home. Great roads both in and out of the city, a thriving cycling culture, many seasoned bike shops to patronize in all points of town, and darn friendly people make Milwaukee one great place to be.

all photos by Dave A.

About Dave:
DOB: 6/5/71
Residence: Just outside Chicago, Illinois, USA
Category: USCF Road 4
Teams: Project 5 and Evil Cycling
Why I Love Cycling: “Nothing on the planet can hurt me more than my bike.”
Fave Cycling Moment: “Anytime I sit down and trance in front of ‘A Sunday In Hell'”.
Favorite rides: “Any criterium, anyplace, anytime, and of course, Ragbrai.”

Pez AWARDS: BEST of the REST!