With riders competing both at home and abroad it was a busy weekend for Rapha Condor JLT.

Things kicked off in style on Friday night when Luke Mellor led home a 1-2-3 for the Men in Black at the Staffordshire criterium.

Mellor beat teammate Ed Clancy, fresh from taking a silver medal at the Commonwealth Games, and Chris Opie, who took his third trip to the podium in six days.

It was Mellor’s first win in 2014, and the 21 year-old Salopian was pleased to take his turn on the top step of the podium.

“I’ve done a lot of racing this year having taken part in most of the stage races the team did up until the Tour of Korea in June. After that I rested a bit and now my form has started to come up nicely.”

On the other side of the channel both Kristian House and Graham Briggs, recent winners of the Sheffield GP and the Wales Open Criterium respectively, showed some fine form at the Kreitz Brietzh Elite stage race in France.

House took a strong 9th on the first stage after being a part of a twenty-five-man break that dominated the day’s proceedings. The following day saw riders tackle a split stage, with Graham Briggs managing a fine 3rd place in the afternoon’s final stage to Carhaix, with House holding 13th place overall at the end of the weekend’s action, the race concludes today.

Elsewhere Tom Moses was on duty for Team England at the Commonwealth Games Road Race in Glasgow. The 22 year-old was at home in the tough conditions on the testing Glasgow course, but was desperately unlucky to puncture out of a select chase group that formed behind the three-man winning break with just over two laps remaining.

Speaking shortly after the race Moses commented,
“I’m pretty gutted to be honest. I was feeling good in the group with Russ (Downing) but I had such a slow change for the puncture that I ended up having to change the wheel myself. By the time that was done my race was over.”

“It is upsetting, but I was glad to be feeling back in really good shape so I’m looking forward to the upcoming races at Ride London and in the US.”

The team will be back in action this Saturday at the London – Surrey Cycle Classic. 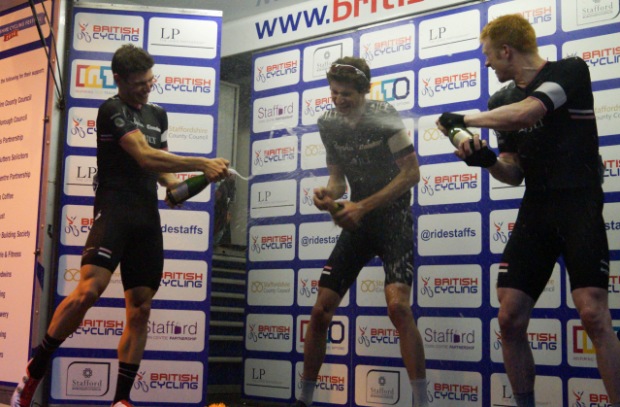