Schweizer said she felt pressure coming into the race as the favourite but handled it well. “The course really suited me,” Schweizer said. “It was up and down and windy. The plan was to start fast so I could see the girl in front of me. After 10km I saw her and passed her. I was just suffering. I was the favourite coming into the race but I was nervous because the last few years I haven’t been good here. I’ve made some mistakes in the past and today I was focused and I think I did a good race. The team is Swiss so we really wanted to win and I’ve been second the last two years so I really wanted to win today.”

Despite a flat tyre in the last kilometre, Lepistö put her good form from recent weeks to use. “I was a little nervous because it was my first long time trial this year,” Lepistö said. “It was 27,4 kilometres. It started to rain in the morning. It just kept pouring. I started a little too fast and took some speed off and kept a good constant pace after that. There were about 25 girls on the start line. The course was flat on and out and back route. I didn’t have that much self-confidence because the route was so long and I knew Sari [Saarelainen] was in good shape in the time trial because she just did the time trial in Baku last week. I had a flat in the last kilometre too so I was very relieved to defend my title and cross the line with the fastest time.”

The team still has the German and Canadian time trials to tackle before turning its attention to the road races. Full line ups can be viewed here. 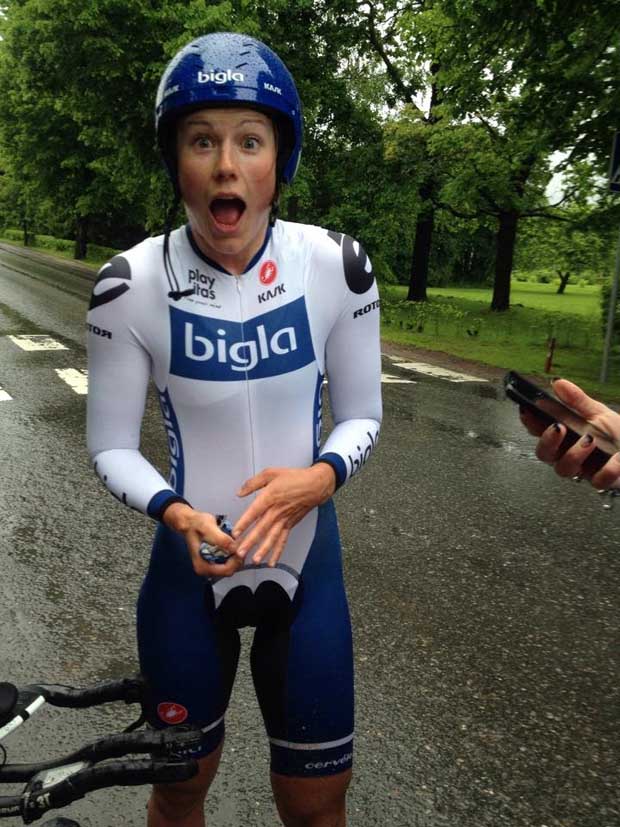 Photo: Despite tough competition and a flat tyre, Lepistö was happy to find out she won.