RCS Sport and Castelli have unveiled the Dubai Tour 2014 leader’s jersey. The four race jerseys, designed by the Italian fashion brand Versace and produced by Castelli, will be worn by the leaders of each race classification. 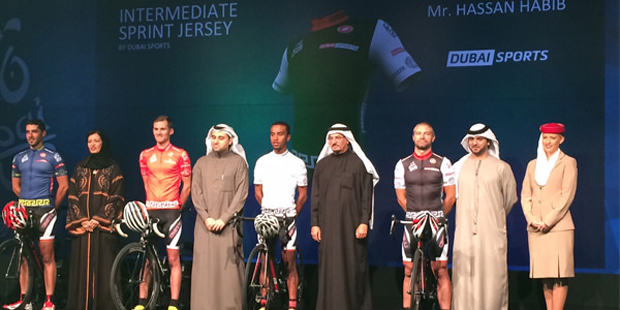 The four-day event, which is the opening race of the UCI’s Asia Tour and starts on February 5, will bring some of cycling’s biggest stars, including Team Garmin-Sharp’s sprinter and classics-rider Tyler Farrar, the reigning UCI Road World Champion Rui Costa, the record-breaking British sprinter Mark Cavendish, the 2013 UCI World Tour ranking topper Joaquin Rodriguez and the Swiss power-house Fabian Cancellara.

The race is expected to be broadcasted across more than 120 countries with riders from 16 teams battling across four stages and 417.9 kilometres for the leaders jersey’s.

Sugoi Introduces New ‘Jersey of the Month’ Charity Initiative For 2014