Pre-race teasers under way across the city, culminating in Giant Jersey Parade.

The 2015 Dubai Tour opened a programme of creative, pre-race teasers on Tuesday 27 January, when the race’s most prestigious symbols, the Dubai Tour Jerseys (designed this year by the British fashion icon and cycling lover, Paul Smith) were unveiled.

Gigantic inflatables of the four jerseys are being exhibited at different sites for 3 days: Jumeirah public beach and kite beach on 31 January, the Burj Plaza and Dubai Mall promenade on 1 January, and JBR Beach on 2 February.

On 3 January, the huge inflatables will form the heart of an amazing Giant Jersey Parade through Dubai. The Giant Jersey Parade starts at 4 pm in four different locations around the city. Each of the jerseys will be accompanied by a peloton of 200 cyclists (the “Bike Shop Ambassadors”) on its celebratory journey across the city, to the applause of the Dubai public.

The 4 processions then converge on the Dubai Tour Village located at Dubai International Marine Club (DIMC) Mina Seyahi, where each stage of the Dubai Tour starts.

Meanings of the four Jerseys
Each jersey has a different colour and is associated with a word that represents its meaning and essence.

The Blue Jersey (sponsored by the Commercial Bank of Dubai) is the symbol of the GLORY conferred by leading the race overall. It will adorn the shoulders of the leader of the General Classification and, at the race finish, of the winner of 2015 Dubai Tour.

The Red Jersey (sponsored by Emirates) will reward the leader of the Overall Points Classification who, through his sheer POWER, will prove that he is the fastest.

The White Jersey (sponsored by the RTA – the Roads and Transport Authority) is the one that all the young cyclists at the starting line will DREAM of wearing.

The UAE Flag Jersey (sponsored by Dubai Sports Channel) is a symbol of SPEED and will be worn by the leader of the Intermediate Sprint classification.

Hospitality village
The Dubai Tour 2015 is fast approaching and the excitement is mounting. The Village will be open to the public each day of the race at the Dubai International Marine Club Mina Seyahi from 9 am to 3.30 pm, allowing fans to meet the champions and enjoy the Dubai Tour Village hospitality.

A memorable spectacle is guaranteed by a host of sideshows, occasional entertainment and the opportunity to encounter the riders in their paddocks. 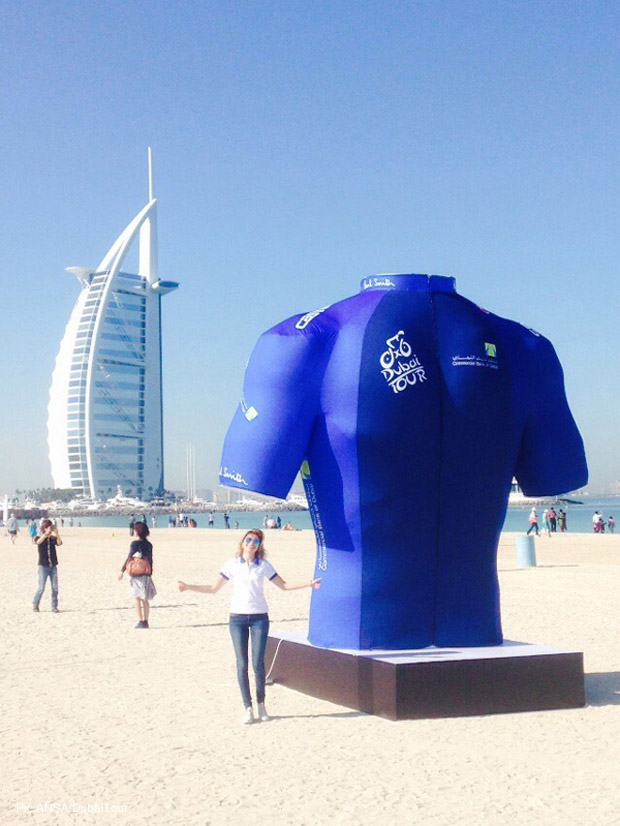