Strava, the social network for athletes, has published its annual End of Year Insights for 2015. Comprising of millions of individual runs and rides, the data offers unique insight into the habits and behaviour of Britain’s cyclists and runners.

The data reveals that in 2015 a staggering 5.3 activities were uploaded and shared on the social network every second. Such an immense depth of data allows documentation and analysis of the UK’s growth in the world of cycling and running, while also providing direct comparison with the Strava community on a global scale.

UK Cycling
Cycling uploads on Strava continue to grow and grow as Britain’s riders logged 23,126,613 individual rides throughout the year, totting up 684,891,474 km along the way. A scorching 32.5°C was recorded on Tuesday 30th June and the result proved to be the year’s most popular day for a ride, enticing Brits to take to the saddle. Though the nation’s landscape does not offer the same grandiose mountain vistas of Europe, riders still managed to reach an impressive 5,988,836,574 meters of elevation gain.

For average ride distance, men recorded 41 km for each ride, while women averaged 34 km. The average ride time was yet another marginal difference as the women’s 2hr 04 min put them in the saddle for longer than the men, who registered 1hr 59min in comparison. Women recorded an average speed of 19.8 km/h for an individual ride, with men registering 24.3 km/h.

Lincolnshire emerged as the fastest county with an average speed of 24.4 km/h, Pembrokeshire took the title of longest average ride with 39.8 km and Merthyr Tydfil the hilliest; demanding its riders to average 630m of climbing per ride through the Welsh valleys.

Strava also revealed that London was the most active location in the UK with 3,551,322 rides logged, a considerable margin of difference over its nearest rival West Yorkshire, where they totalled 795,836. Cambridgeshire and its great swathes of fenland produced a similarly expected statistic, mustering only 119m of climbing as it earned the title of flattest average ride. Richmond Park’s Full Sawyers Uphill was the most popular segment in the world in 2015, with 33,226 individuals attempting the climb.

Cycle Commuting
For many of Strava’s members, commuting is a large part of their daily routine, with an average of 171,576 rides recorded as commutes to and from work every week. A pacey average of 23.7 km/h ensured riders made it in on time, tackling an average 15.9 km door-to-door. Winter was an unappealing affair for many, axing commuter activity by 50.6% as people returned to other methods of transport.

Global Running
Runners around the world clocked up 52,006,574 runs on Strava, recording the equivalent of 275,648 marathons along the way, as they reached an impressive running total of 434,262,247 km. Unlike Strava’s cyclists, who chose early summer to reach their peak activity, the runners looked to the tail end of the season in order to stretch their legs and marked Sunday 13th September as the most active day for a run. Global elevation gain was one of the most astounding statistics for Strava runners, reaching the dizzying heights of 3,810,420,727 meters in total.

During the year, men and women spent a similar amount of time pounding the roads, parks and countryside of Britain; finishing only 36 minutes apart as men totalled 14hr 38min to women’s 14hr 02min over the course of the year. London and West Yorkshire once again locked horns for most active location, with the capital’s runners completing 1,350,078 activities to its northern rival’s 416,215.

Run Commuting
Tuesday 14th April had the most people digging out their running shoes and commuting into work, encouraging 5,751 to swap their usual mode of transport to work up a sweat instead. Commuters heading in on foot spent a minute less travelling than their cycling counterparts (38 min v 39 min) and uploaded 19,137 runs to Strava each week.

Simon Klima, UK Country Manager for Strava, commented; “This latest release of Strava’s data demonstrates once again the great depth of insight which is available when collating the activities of the world’s cyclists and runners.”

He continued: “The UK’s Strava story offers us an unprecedented opportunity to analyse and interpret a broad spectrum of data, helping to understand behaviour and habits; as well as providing real world feedback on how people utilise their local roads for both exercise and commuting.”

To find out more about Strava, please visit www.strava.com

About Strava
Strava unlocks potential through the power and purpose of sport. Designed by athletes, for athletes, Strava’s mobile apps and website connect millions of runners and cyclists every day. 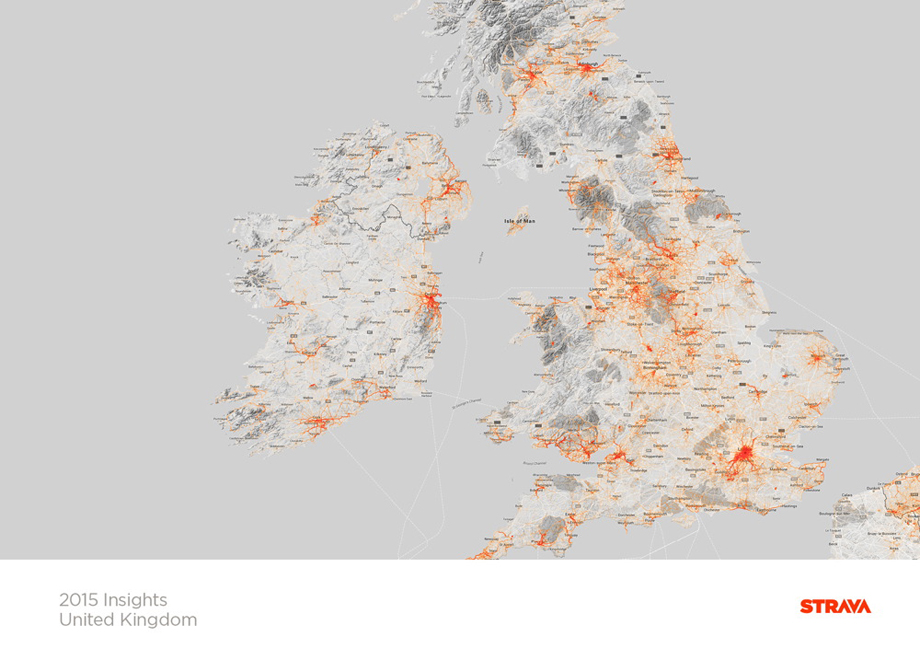