The Bigla Pro Cycling Team was presented today at the team launch in Biglen, Switzerland. The event took place in Kultufabrikbigla, a cultural venue of the Bigla company. The 14 athletes were presented to guests and the media and quizzed about what they’re expecting of the 2015 season.

General Manager, Thomas Campana who took over the management of the team late last year explained the values and mission statement going forward.

“We’ve set very high goals for us as a new structure but we’re also realistic so we will have to evaluate after the first few races and see where we’re at,” Campana said. “We want to become one of the most competitive teams in the peloton, particularly at the marquee races on the calendar and in the team time trial. Our goal it to set up an environment that partners want to become part of because they see value in women’s cycling. Now is the time to take the sport to a new level, welcome to the mission.”

The new colours of the team and particularly the blue bar seen on the teams communication and vehicles were also explained. The blue being the colour of water in Switzerland and white being the snow as the team sticks to its Swiss routes.

“It’s really been a great atmosphere at the camp and then today to see everyone for the presentation was great again,” Annemiek van Vleuten said. “I joined the team because I wanted to challenge myself and I find it inspiring spending time with the riders. It was nice to see the base of the Bigla company and where they are based and the good work that they do. The girls can’t wait to start racing now,” van Vleuten concluded.

Last week the team completed the first training camp at the Playitas resort on Fuerteventura in the Canary Islands. The first racing action will take place between 3 – 6 February in the Ladies Tour of Qatar.

The new Bigla Pro Cycling Team website is now live and can be viewed at www.bpct.ch 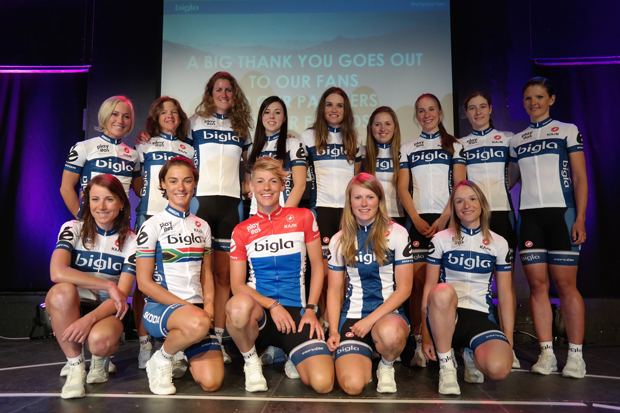