Attacking in the first 20km of racing, the former Australian champion worked out to almost two minutes advantage before narrowly holding on for the victory. Behind her, teammate Emma Johansson wrapped up the bunch kick to make it a 1-2 for ORICA-AIS.

After taking her first European victory earlier in the year, Elvin’s second was a hard fought but very satisfying one, overcoming heavy rain and cobbles on her lengthy lone mission.

“Winning solo is definitely a bit of a dream for a lot of riders, especially when you’ve been away for quite a while,” Elvin said. “It’s tough and you are 50/50 whether you are going to stay away and you just have to dig deep.”

“It was good conditions for me with the cobbles and quite a technical course, and then as soon as it started raining I thought ‘yeh, you know what, this is my day.’ I love it when it’s a bit like a Classics race, it suits me a lot better and I think a lot of girls hate it so you have the double advantage.

“They weren’t very far behind me in the end because I was really fighting my bike up the last climb. It was pretty steep but I just got it and am super happy.”

After an unsuccessful move as a duo, the timing of Elvin’s secondary attack was perfect and despite having no other contributors, it was the one that stuck.

“We did four laps of a technical course,” the 26-year-old explained. “We got over the lap and first cobbled climb. A girl attacked and I jumped across with her but the small reduced bunch brought us back pretty quickly.”

“As soon as the bunch sat up I looked back and could see another group coming across and I just knew it was a good moment while people were having a breather.

“I hit it and no one came with me which was a bit annoying. Sometimes being on your own is not the best and a bit of a suicide move but they let me go.

“I tried to keep it at 90% because I knew that if a group jumped across I needed to be fresh enough to stay with them until the end and support Emma. But with a lap to go I had a good gap so I knew I just had to punish myself. I drove myself into the ground and managed to pull it off.”

Capping off a perfect day for ORICA-AIS, teammate Johansson claimed the best of the rest and also additional bonus seconds mid-race to assist her general classification ambitions.

“We had some high hopes for our general classification girls in Emma and Amanda Spratt,” Elvin said. “We wanted to keep them in contention and use me to put pressure on the other teams.”

“I think we rode perfectly. Except that I was alone, that’s not always best, but it worked anyway.”

Stage 3b – ITT
First up on a double third day of racing was a tough and technical 19km time trial.

Johansson managed to record the fifth fastest time of the morning, moving the 31-year-old up into fifth overall, whilst Spratt battled after her efforts in yesterday’s break to finish 11th on the stage and drop to ninth overall. 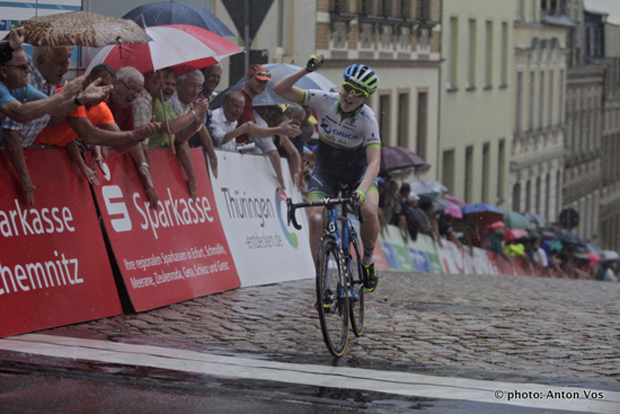