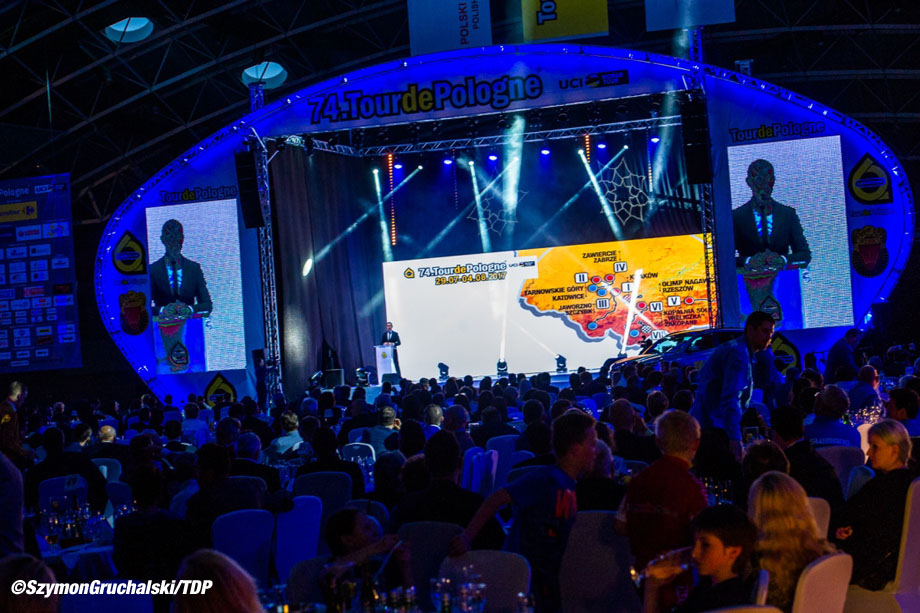 The official presentation for the Tour de Pologne – UCI World Tour was a fantastic show. The vernissage for edition number 74 of the Polish stage race took place this evening, with almost 500 guests, at the magnificent venue provided by the BGZ BNP Paribas Arena in Pruszkow, the modern velodrome located just outside Warsaw, which has already hosted important international competitions organized with collaboration of the Lang Team, including the 2009 World Championships and the 2010 European Championships. 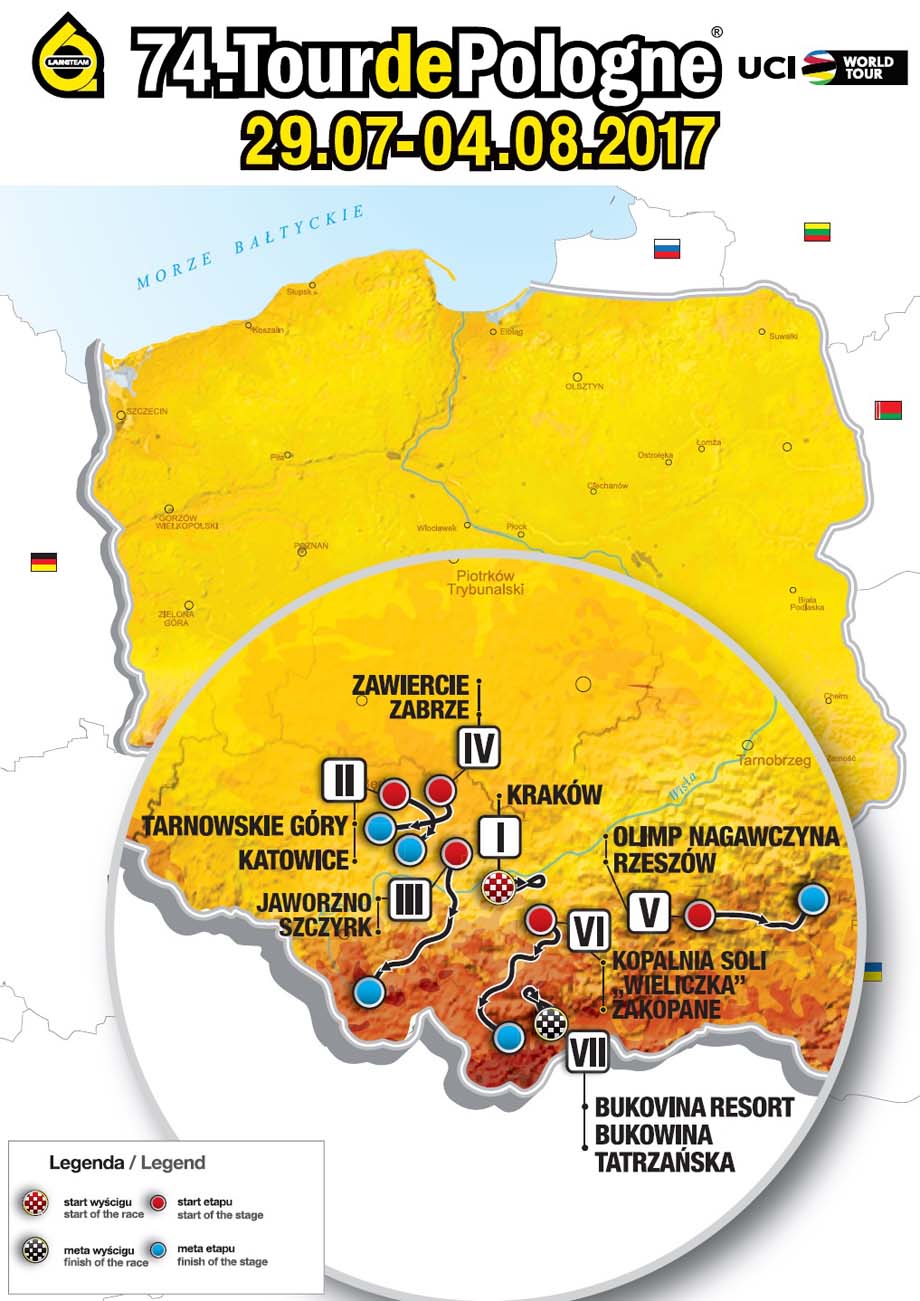 THE STAGES
There are 7 stages scheduled for the 2017 Tour de Pologne – UCI World Tour. It all starts on Saturday, July 29th, with the Grand Depart from Krakow, historical and cultural capital of Poland, with an in-line stage suited to sprinters. The final finish line will be crossed on Friday, August 4th, after plenty of climbing on the gruelling Bukowina Tatrzanska circuit, in the heart of the Tatra Mountains.

You can consult and download site plans and altimeters, plus find out all the details of the different stages by visiting the website: https://tourdepologne.pl/pl/ 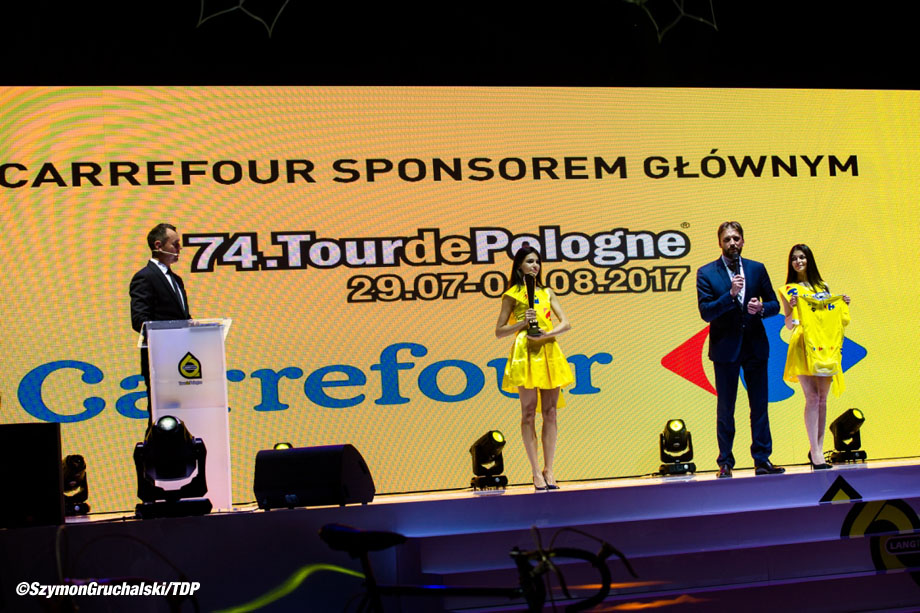 THE GUESTS
Many familiar celebrities from the sports world and various institutions participated in the opening for what has become the most important cycling event in all of Eastern Europe. It’s the only major stage race in this part of the old continent that is included in the UCI World Tour calendar and it can be considered Poland’s most important annual sporting event.

General Director for the Tour de Pologne, Czeslaw Lang played the role of host for the evening, along with the newly-elected President of the Polish Cycling Federation with headquarters at the velodrome, Dariusz Banaszek. The Polish Minister of Sports and Tourism, Witold Banka was with them to testify to the value that this sports event holds for Poland. General Manager of the UCI (Union Cycliste Internationale) Martin Gibbs and Marian Stetina, member of the UCI Board of Directors also participated. Then there was Alexander Gusyatnikov, board member and acting Vice President of the UEC (Union Européenne de Cyclisme). Just a reminder that this UEC role is also held by Agata Lang, who leads the organizational team for the Tour de Pologne along with her father Czeslaw. Riders present included Przemyslaw Niemiec from UAE Team Emirates, who was forced to sit out this year’s Giro d’Italia due to a nasty spill in the Tour of Croatia. And then there were all the sponsors of the big family that is the Tour de Pologne, along with throngs of media who tell the story of the race and broadcast it to homes in all of Poland and throughout the rest of the world. 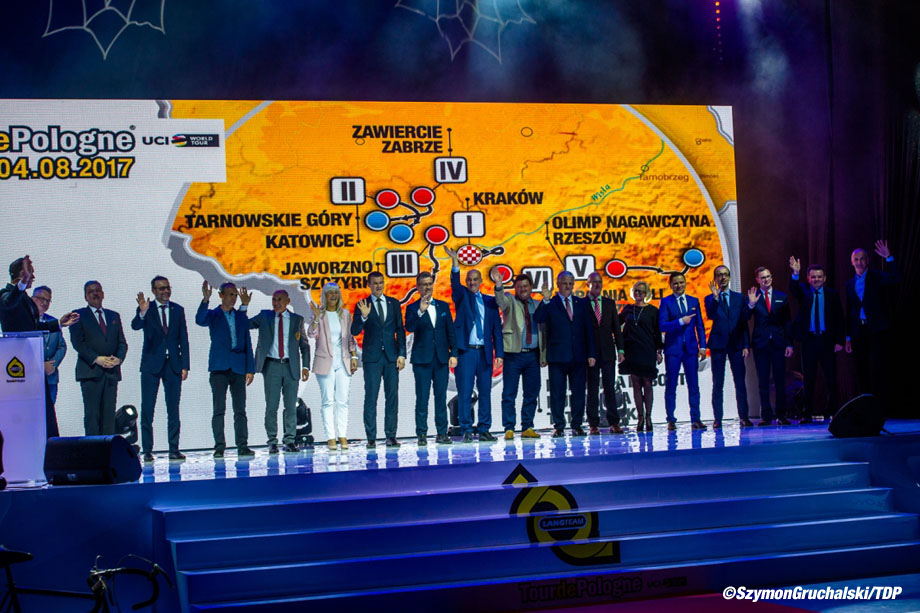 A DAY DEDICATED TO TWO WHEELS:
kermesse on the track with young riders and “old glories”.
The presentation of the Tour de Pologne number 74 was the highlight of an entire day dedicated to two wheels, which witnessed a succession of various initiatives organized by the Lang Team in collaboration with the Polish Cycling Federation. The velodrome hosted an exhibit of photos, documents and historical artefacts retracing the history and stages of the Tour de Pologne and Polish cycling, the champions of today and of years gone by, and the victories. A spectacular showcase took place on the track throughout the day. The first stars were the boys and girls from the youth categories. Then in the evening it was the “old glories” chance to shine, including General Director for the Tour de Pologne Czeslaw Lang and his co-worker and teammate Lech Piasecki, along with other great Poles, Ryszard Szurkowski and Dariusz Baranowski. These ex-champions took to the oval in Pruszkow alongside the best young riders of the day. It was a long sprint with the past and future of Polish cycling pedalling together to build something important. 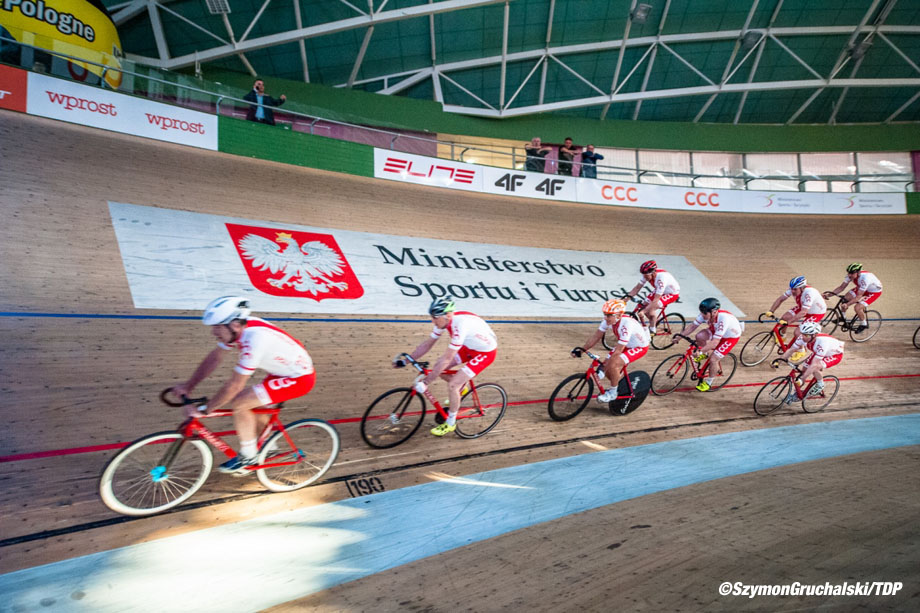 QUOTES
“This year we will start in Krakow, home of the conclusive time trials in the last editions, with a stage in-line that, at least on paper, is dedicated to the sprinters. In the first part of the Tour de Pologne we will primarily see the fast wheels of the group in action, and there will also be space for those brave hearts who want to try to attack with some long breaks. New initiatives include the uphill arrival for the third stage in Szczyrk, on a not impossible climb that is however interesting for the aspects that can be compared to the Poggio haul in the Milano-Sanremo. Instead the fourth stage will be the longest, at 238 km. Then the last two days will be the most difficult, with the mountain stages in the heart of the Tatra Mountains. In this edition the reigning stage will also be the hardest, in Bukowina Tatrzanska. This event usually takes place on the second-to-last day but this year it will become the final stage. There will not be any time trials this year and it will probably be the challenging circuit in Bukowina Tatrzanska that decides who the winner of the Tour de Pologne will be. We made this choice with the intention of leaving the race wide open, uncertain and hard-fought right up to the end. We hope that once again this year, according to tradition, our race will shine a spotlight on lots of young talent; looking back to the recent past I can think of Peter Sagan, Daniel Martin, Moreno Moser, Fernando Gaviria, Marcel Kittel, our own Majka and Kwiatkowski and many, many more,” explains the General Manager for the Tour de Pologne Czeslaw Lang. 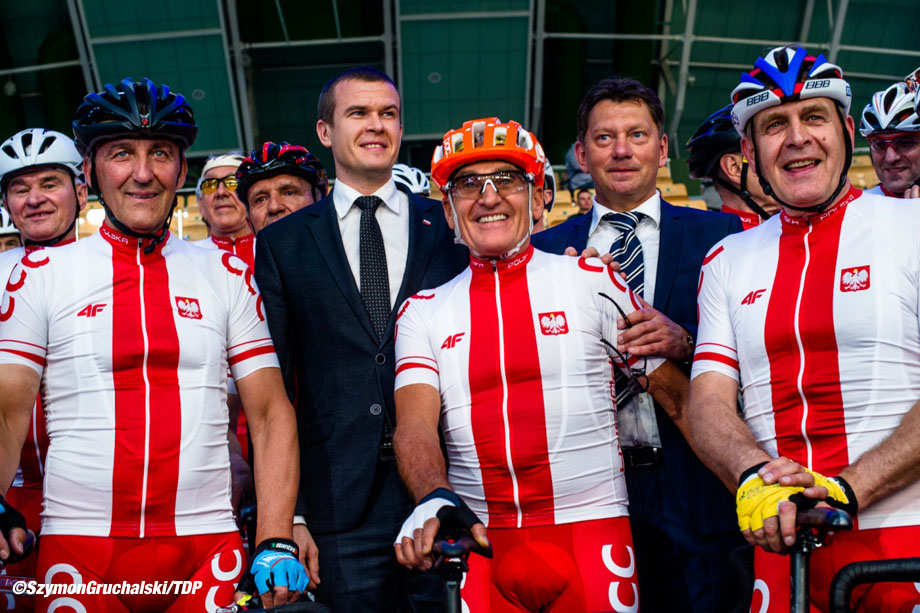 “The Tour de Pologne is not only an international sports event; through the media exposure provided during and beyond the race, it has become an important showcase for Poland throughout the world under all aspects, highlighting its historic and cultural heritage and the scenic beauty of the places it passes through. It means a lot to me to also underscore the great social and educative value of an event like the Mini Tour de Pologne, which strives to get children and their families involved,” emphasized the Minister for Sports and Tourism, Witold Banka.

THE TEAMS STARTING
As always, the true stars in the Tour de Pologne are the riders. The starting grid will feature 18 UCI World Team formations who participate by right in all the races on the UCI World Tour calendar. These are joined by 4 wild card slots assigned by the Tour de Pologne organizers to: Team Novo Nordisk (USA), Gazprom Rusvelo (Russia), CCC Sprandi Polkowice (Poland) and Reprezentacja Polski (the Polish National team).

THE OTHER TDP EVENTS
It’s not all just about the pros. Once again this year the race will run parallel with two important events. Every day, except for the last stage, there will be the Nutella Mini Tour de Pologne, with two races open to the youngest of riders (8-12 years old) and the event reserved to kids from riding clubs (13-14 years old). “This year Nutella and the Tour de Pologne will celebrate the milestone of 10 years of consecutive collaboration together and this is also the 25th year of Ferrero in Poland. It is a tremendous satisfaction for both parties to think of the thousands of young people who have learned a passion for cycling through this event. The finest and most outstanding example is definitely Michal Kwiatkowski, who “blossomed” on the roads of the mini tour, but of course not everyone can become a champion like him. The aim of the Nutella Mini Tour de Pologne is to impart important values like effort, commitment and sacrifice, values that are as indispensable to sport as they are to personal growth in life,” explains Enrico Bottero, General Manager for Ferrero Polska Commercial.

The other event is the Tour de Pologne Amatorow, the race which every year brings more and more pedalling enthusiasts to ride along the same roads as the pros for the spectacular stage in Bukowina Tatrzanska, which this year will enjoy the honour of serving as the final conclusive stage of the Tour. 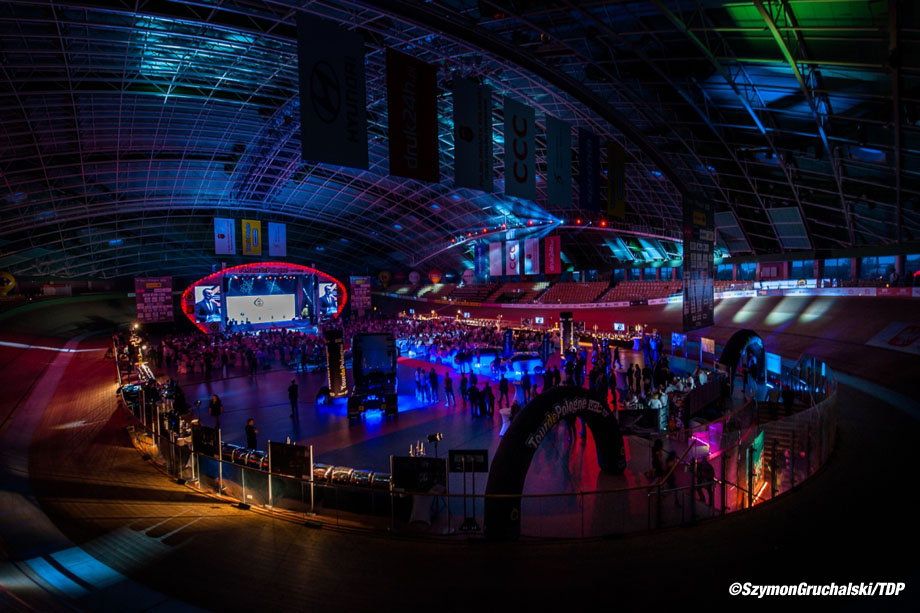