A third stage victory for Drapac at Tour de Kumano

Drapac Professional Cycling has finished off the Tour de Kumano in style, claiming another 1-2 finish, again through Wouter Wippert and Will Clarke.

Wippert won the sprint finish in Taiji Hanto ahead of Clarke with Hayato Yoshida (Shimano Racing Team) rounding out the podium. The Drapac double mirrors the pair’s performance on Stage 1 earlier this week.

The 100 kilometre, 10-lap final stage was peppered with attacks but with 5km remaining, the race was back together ready to be determined by a bunch sprint.

“Today’s stage was tough day, especially with the weather being so hot,” explained Wippert. “Skydive Dubai did a good job at controlling the peloton all day.

“The last 3km was very technical, so the guys did a brilliant job to ensure we were on the front for that final section,” he continued. “As a team we stayed together and constantly within the first 10 – 15 riders to ensure we stayed out of trouble. So it was a brilliant team performance.

“Will started his final lead-out with 500 to go and delivered me perfectly, and then finished it off to get 2nd on the stage.”

The win, Wippert’s seventh of the 2014 season, ensured victory in the points classification having started the day in second place behind Francisco Mancebo (Skydive Dubai) by just one point.

“Today’s win was a brilliant conclusion for everyone on the team to end our Japanese trip,” said Wippert.

Sunday’s efforts take Drapac’s tally at the Tour de Kumano to three stage wins – with Will Clarke fastest in the opening prologue – and three podium placings.

In an added bonus for the Drapac squad in Japan, two riders finished in the top 10 of the General Classification with Lachlan Norris 6th and Jai Crawford 7th, both 12 seconds in arrears of overall winner, Mancebo.

“It was a brilliant team effort by all of the boys, throughout what was actually a tough four-day race,” said Drapac’s Director of Performance, Keith Flory. “To win three stages out of four and have two guys in the final selection on stage 3, the queen stage, is a fantastic result.” 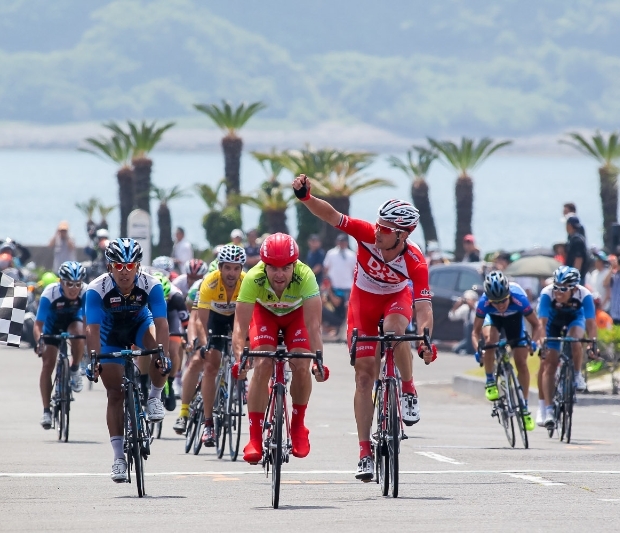 Will Clarke celebrates as Wouter Wippert claims another win for Drapac in Japan. © Hideaki Takagi