Neo-pro Adam Yates became the first British winner of the Tour of Turkey in Istanbul on Sunday. En route to victory in the 50th edition of the eight day Turkish tour, Yates scored his first professional win, soloing across the line on the stage six summit finish. The win allowed Yates to move to top of the general classification by 1” over Rein Taaramäe (Cofidis).

Gapping Taaramäe at the finish on the final stage, Yates extended his lead to 5” by tour end. The 21-year-old is part of a hugely successful week for ORICA-GreenEDGE that includes six victories in the last eight days, bringing the team’s tally to 17 wins in the 2014 season.

“We came here racing for stages,” said Yates. “When you decide to race for stages in the mountains, you can go for the overall as long as you stay up there on the sprint stages. We weren’t targeting the overall but it came with targeting those two summit finishes.”

“On the first mountain stage, Taaramäe was clearly the strongest,” continued Yates. “The key moment of our race was when I won the next mountain stage and took the jersey off him. On the stage that I did win, the guys kept me out of the wind all day. I arrived at the bottom of the climb fresh, which was really important.”

“I can’t thank the team enough,” Yates added. “Hopefully there is more like this to come.”

The peloton flew into Istanbul on Saturday evening for a final stage circuit race around Turkey’s capital city on Sunday. The day included a 30 kilometre procession onto the circuit where the peloton would ride eight times around the 11 kilometre loop. The stage is traditionally one for the sprinters.

“It was pretty calm at the start,” said Dean. “The rain sort of dampened things a bit. Morale of the whole peloton was a bit low. It took a little while for the race to really get going, and that played into our hands. There were a couple attacks but nothing too serious. I think the peloton was tired.”

When the peloton hit the circuit, a seven rider breakaway formed off the front of the bunch. Several different teams patrolled the head of affairs, keeping the escape group in check. The leaders were unable to stretch their advantage beyond the minute mark.

“There was no one in the move that was a threat to the overall,” noted Dean. “This left us with just one priority. We kept Adam out of trouble, out of the wind and in a good position throughout the rest of the race.”

“We were never under any pressure but it was stressful,” admitted Yates. “The rain at the start was quite dangerous. It’s easy to slip or fall or get taken down by someone else. All the hard work during the week could be over just like that.”

Cannondale and Omega Pharma – Quick-Step upped the tempo in the final hour of the race, spelling an end for the break’s time out front. Just inside the start of the last lap, the bunch was back together. Initially, the Australian outfit was happy to allow the sprint teams to duke it out for control on the front. When Taaramäe rode his way to first wheel, Jens Mouris led the response for ORICA-GreenEDGE.

“The team rode well all day,” Yates said. “Toward the end, they went to the front before the one dangerous corner on the circuit to make sure we weren’t caught up in any crashes. We could breathe a sigh of relief when we hit the three kilometre mark. Even though things can happen after that, if they did, I would have gotten the same time as the leaders. It was stressful until we hit three kilometres. Then, we could relax.”

“We were never really under threat, but you never know,” added Dean. “We had to protect our position, especially when it’s only 1”. Jens and the other guys did a fantastic job in the final to keep Adam at the front and out of trouble.”

“The day went off pretty much without a hitch,” Dean added. “We were quite glad the rain clear. It was a lot better for everyone. The whole day was perfect for us.” 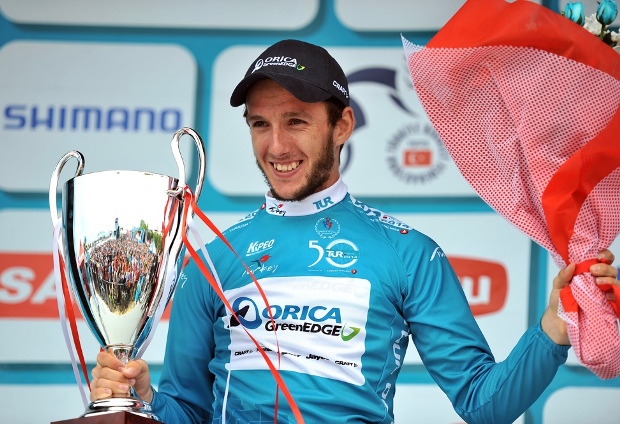