A determined effort from Drapac Professional Cycling netted second place for Bernard Sulzberger and third place for Lachlan Norris in Stage 4 of the Tour of Tasmania on Friday.

The result followed consecutive stage victories for the Australian Professional Continental squad, through Wes Sulzberger on Stage 2 and Jai Crawford on Stage 3. Drapac Directeur Sportif Henk Vogels said that the team had been aggressive all day.

“We were unlucky not to get the hat trick,” he said.

In a stage tipped to have a big say in the final General Classification, the yellow jersey changed hands with Patrick Bevin (Search2Retain) the new overall leader (8:48:26), with Ben Dyball (Avanti) 11seconds in arrears, followed by Budget Forklifts’ Tim Roe at 55seconds with Drapac’s Lachlan Norris retaining fourth 1:03 back.

Wes Sulzberger made the early four-man break that was caught before the decisive Gunns Plains KOM, 78 kilometres into the 106km stage. As expected, the climb had a significant impact on the size of the peloton with around 15 riders making it over the top including the Sulzbergers, Norris, Crawford and Darren Lapthorne.

Attacks came thick and fast with the downhill run into the stage finish in Penguin, with Lapthorne going head-to-head with Avanti’s Mark O’Brien with 2km left to race. Once that duel was neutralised, Norris tried to launch with 800 metres remaining only to be caught on the finish line by Bevin and Bernard Sulzberger, who had won the stage in 2013.

“When you give everything you’ve got then you’re contented,” said Vogels. “They were aggressive the whole day.”

Vogels believes that the yellow jersey has been decided with two stages left to race, but added: “stranger things have happened. Having said that we’re certainly not throwing the white flag up that’s for sure.

“It will be a hard stage tomorrow but I don’t think it will be really hard enough to do some major damage,” he concluded.

The 2014 Tour of Tasmania continues on Saturday with the Burnie road race, over 81km. 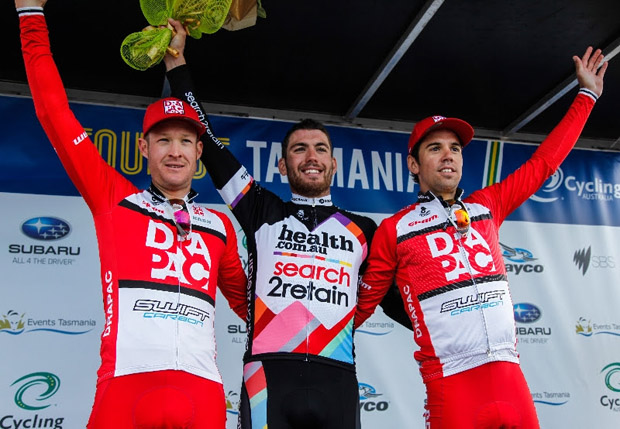