The 2014 USA Pro Challenge professional cycling stage race, taking place Aug. 18-24 in Colorado, will feature an exhilarating new route that will include the race’s first-ever mountaintop finish on storied Monarch Mountain. Taking riders to unprecedented elevations, higher than any of the Grand Tours (Tour de France, Giro d’Italia and Vuelta a España), the race will be a heart-pounding journey through the breathtaking Colorado Rockies.

“We’ve set out to create the greatest professional cycling event in the U.S. with the USA Pro Challenge,” said Rick Schaden, owner of the race. “The 2014 route will be a challenge for the riders and will provide plenty of great viewing opportunities for the spectators. This year is looking like it will be the best yet.”

The largest spectator event in the history of the state, the race will visit 10 official host cities for the starts and finishes of each stage, ranging from small towns to cities as large as Denver, with a population of more than 634,000. The final stage should serve to break any previous single-day attendance records with a start in Boulder, one of the most bike-friendly cities in the U.S., two passes through Golden, which has brought out huge crowds in past years, and a finish in Denver, the state’s capitol.

“Every year we strive to create a route that will challenge the riders in new ways, give spectators more opportunities to see some of the toughest athletes in the world and highlight new parts of Colorado,” said Shawn Hunter, CEO of the USA Pro Challenge. “The mountains are such a big part of the USA Pro Challenge and we always have incredibly enthusiastic fans packing the summits, so we’re adding a new test for the riders this year, and a new viewing opportunity for our dedicated fans, with the Stage 3 mountaintop finish on Monarch Mountain.”

The two new locations joining the 2014 race – Monarch Mountain and Woodland Park – each offer breathtaking scenery that will add to the overall excitement. Reaching a top elevation of 11,542 ft. on Hoosier Pass, the race will include a total elevation gain of nearly 40,000 ft. over the seven days. Two new mountains – McClure Pass and Kebler Pass – will help reach that number.

“It looks to be the most challenging route yet,” said Tejay van Garderen, professional cyclist on BMC Racing Team and defending champion. “I have fond memories of many of the stages that are included in the route…most notably Aspen, which is my hometown, Crested Butte and Vail, where I took a stage victory last year. I don’t know the Monarch Pass ski resort, but it will be cool to have a tough summit finish. This route suits me well. I’m anxious to add another title to my resume.”

One of the most highly anticipated events on the race calendar, the 2014 USA Pro Challenge will test the riders’ strength and endurance over a 550-mile course. To give fans the opportunity to see their heroes up close and in action, each stage, with the exception of the individual time trial, will start with at least one circuit lap before leaving town.

Highlights of the route include:

Stage 1: Aspen Circuit Race – Monday, Aug. 18
Stage 1 of the 2013 race was such a success, so it’s back for 2014. The Aspen/Snowmass Circuit may be short on distance, but it packs a punch. At 65 miles (3 laps of nearly 22 miles each), and 2,300 ft. of climbing per lap with minimal recovery, this circuit puts the “challenge” in USA Pro Challenge. Each lap will see the riders grind up to Snowmass Village, then a quick descent leads to two short but steep climbs, and a quick loop through downtown before doing it all again. Pair that with a starting elevation of 7,900 ft. and you have one tough opening day.

Stage 2: Aspen to Crested Butte – Tuesday, Aug. 19
Each year the USA Pro Challenge searches for ways to include more of Colorado’s deep cycling history. Last year it was the climb up Bachelor Gulch and this time around it will be Kebler Pass. Stage 2 opens fast by ripping down the Aspen Valley through the sprint cities of Basalt and Carbondale before tackling the 8,700 ft. McClure Pass. A short descent brings the race to Gunnison County Road 12, which is a 20-mile rollercoaster that constantly changes from pavement to dirt and back again, while topping out at 9,900 ft. over Kebler Pass. A technical descent into Crested Butte brings the race back to familiar terrain. As in 2011 and 2012, the race will finish up with a sprint through downtown Crested Butte and the steep finish climb up to Mt. Crested Butte.

Stage 3: Gunnison to Monarch Mountain – Wednesday, Aug. 20
During Stage 3 of the 2014 race, riders will not only have to contend with a mountaintop finish, they also will have to pass over it first, giving spectators a chance to see the race multiple times from the same vantage point. Stage 3 starts in Gunnison and heads east for 35 miles before tackling the 11,300 ft. monster that is Monarch Pass. The riders will then descend the eastern slope of the pass and do two 9-mile loops through Salida and the surrounding countryside. Then it’s game time as they tackle nearly 20 miles of climbing to a finish at 10,800 ft.-Monarch Mountain Ski Area.

Stage 4: Colorado Springs Circuit Race – Thursday, Aug. 21
Colorado Springs keeps reinventing itself as a host city. In 2011 it hosted a prologue, in 2012 it was a fast road stage finish for sprinters and for 2014 it will be a challenging circuit that could contain a surprise general classification shake up. After a ceremonial start at the world famous Broadmoor, the race will head into town and join up with a 16-mile circuit that will be raced four times. With climbs through Garden of the Gods, Mesa Rd. and the infamous Ridge Rd., which hits grades of nearly 17 percent, the route will present some challenges for the riders. If a sprinter hangs on to win, they will have earned it the hard way.

Stage 5: Woodland Park to Breckenridge – Friday, Aug. 22
The 2014 USA Pro Challenge does not let up with Stage 5. This stage’s serene first 80 miles hide a vicious finish and a last chance for climbing specialists to really make a move. Starting in the new host community of Woodland Park, Stage 5 heads west then north through some of the most picturesque terrain in Colorado. The route takes the riders on a quiet run through the Pike National Forest on Tarryall Rd., which was unpaved until just last year and the riders will christen it properly with high speeds and lots of breakaway attempts. The action really starts when the race hits Fairplay and begins the long grind up 11,500 ft. Hoosier Pass, the highest point in the race. Then it is on to Breckenridge, where last year’s challenging finish up Moonstone Rd. will be repeated again. This nasty little climb can kill a break or launch a winner.

Stage 6: Vail Individual Time Trial – Saturday, Aug. 23
Last year the USA Pro Challenge visited Vail, and the time trial was decided by four seconds. In three visits to the Vail individual time trial course, this was the largest margin of victory. Competition will be equally fierce this time around, but the names may change a bit. The course’s roots are in Colorado racing lore and trace back to the Coors Classic. Starting in Vail and climbing most of the way up Vail Pass the route is no easy proposition, even for the best riders on earth. The gentle grades of the first half of the course give way to a steady climb for the last three miles. It takes more than legs on this strategic course though; go too hard early and the climb may kill your chances, but conserve too much for the climb and the leaderboard may be out of reach.

Stage 7: Boulder to Denver – Sunday, Aug. 24
It is no secret that some of the largest crowds in USA Pro Challenge history have been in Boulder, Golden and Denver, so why not put them all in one stage?

“I am really happy to see the 2014 edition of the USA Pro Challenge return to my hometown of Boulder,” said Taylor Phinney of the BMC Racing Team. “The energy at the finish two years ago was unreal, and it is always special to race near home. This is one of my favorite races of the year and I hope to be able to participate since I missed it last year.”

While Stage 7 stays on familiar terrain, every year is different and anything can happen in bike racing. Leaving Boulder on CO 93 the riders will have several hilly and windswept miles for breakaways to set up before reaching Golden for the first of two passes. Through Golden, the riders will tackle the 4-mile climb of Lookout Mountain, which they haven’t seen since 2011. Another quick pass of Golden and the race is screaming through suburbs en route to downtown Denver. An abbreviated version of last year’s circuit awaits the riders for three and a half fast laps through downtown, 17th Ave. and City Park. Over the years, the race has witnessed some incredible sprinting on Broadway in the heart of Denver and 2014 should be no exception.

Host city information, maps and elevation profiles are available on the race website at https://usaprocyclingchallenge.com/2014-pro-challenge-route.

About the USA Pro Challenge
Referred to as “America’s Race,” the USA Pro Challenge will take place August 18-24, 2014. For seven consecutive days, the world’s top athletes race through the majestic Colorado Rockies, reaching higher altitudes than they’ve ever had to endure. One of the largest cycling events in U.S. history and the largest spectator event in the history of the state, the USA Pro Challenge continues to set records in professional cycling by taking the riders to unprecedented elevations. Featuring a challenging course, the fourth annual race will spotlight the best of the best in professional cycling and some of America’s most beautiful scenery. 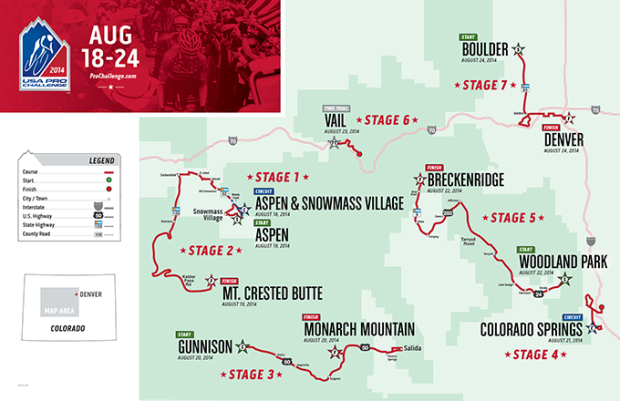