Tinkoff-Saxo and Alberto Contador happily announces that the Spanish captain will go to Jerez for the start of Vuelta a España after progressing in his recovery following the high speed crash in Tour de France. Alberto’s improvements in the knee-region has allowed him to train for just under two weeks but it hasn’t been until recently that the two-time winner of the Vuelta has been able to train without pain.

“I haven’t been training on my bike for more than ten days and yesterday was the first day, where I was able to climb a mountain pass without pain in my knee”, says the leader of Tinkoff-Saxo from Lugano and continues:

“It excites me, motivates me and has led me to make the decision to ride the Vuelta a España”, says Alberto, knowing it will not be easy. “I know it will be a Vuelta that I’ll have to do in a very different way than I had imagined earlier on in the season and during the first part of the Tour. But I think it’s the right decision considering the end of season and the start of next season”. 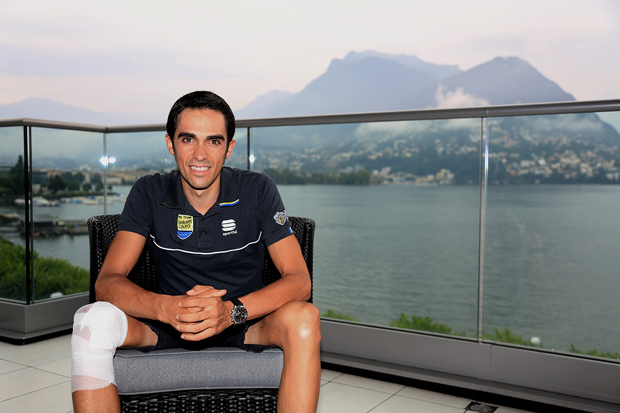 For Alberto Contador, the problem is the lack of competition, having spent many days without training with a fresh wound in his right knee as well as the fractured tibia.

“Perhaps in the last week of the Vuelta I can be fighting for a stage win. I still hope to improve in terms of my physical shape. I’ll try to do my best in the last week before the start and I look forward to seeing you all in Jerez”, concludes Alberto Contador.

After Alberto ruled out Vuelta a España due to complications that arose during his recovery, great work done by the team’s physiotherapists and the collaboration of technicians from Indiba to Compex has achieved what seemed impossible.

The work of the doctors at CEMTRO Clinic in Madrid has also been fundamental to Alberto’s swift recovery, both in terms of the fast diagnosis of the injury, which allowed discarding the need for surgery, and in the subsequent treatment of the wound, which was reopened a week after the accident. A surgeon traveled from Madrid to Lugano to treat Alberto. He reopened the wound, did a deep cleansing of dirt and removed small stones that were left inside after the treatment at the emergency room in France.

“Thanks to the work of all the specialists, who have treated me I could recover in record time. I am deeply grateful to all of them”, says Alberto Contador.