Alex Dowsett is refusing to take his falling short in an attempt to break Victor Campenaerts’ UCI Hour Record as a failure despite not covering the intended distance on Wednesday, claiming the biggest failure would have been not to try at all.

While he was unable to topple the aforementioned record or beat the British one, the 33-year-old cyclist met what was actually his biggest goal: raising hemophilia awareness.

According to the CDC, hemophilia is a bleeding disorder that is inherited and prevents blood from clotting easily. It can also lead to random bleeding or bleeding after injuries or surgery.

Dowsett, who has the inherited disorder, managed to raise donations of over £22,356, with funds still rolling in, per Cyclingnews.com. Having set a target of £15,000, his drive has far exceeded and he’s proud of his achievements though he was not able to break the record distance of 55.089km.

“The biggest failure today would have been to have never tried and that’s the message I want to send out,” said Dowsett after the attempt.

“I spent my childhood being told what I couldn’t do. My mum, my dad, and I, we knew what we couldn’t do – football, rugby, boxing – so we set about finding what we could do. We turned a negative into an absolute positive and I’ve been able to carve a massive career out of adversity.

“That should be the message. Life can throw you a bad hand at times but it’s what you make of it. It’s how you deal with it.”

Dowsett, who has won two stages of the Giro d’Italia as well as the British time trial six times, has already held a UCI Record. He set a mark of 52.937km in May of 2015 and held onto it for a month before Bradley Wiggins went for 54.526km. Several riders made attempts to usurp the figure set by Wiggins but everyone failed until Campenaerts notched 55.089km in April of 2019.

It’s quite likely that bookmakers have odds on offer as it pertains to the possibility of the record being broken someday and sports betting sites reviews are handy on such a front.

While it withstood several attempts since then, Wiggins’ British record was beaten when Dan Bingham rode 54.723km in October. Dowsett beat the milestone this week but fell shy of the new national record.

The Maldon-born cyclist declared he had what it takes to break the UCI Hour Record nearly seven years ago but was aware that he had more at the end and was frustrated not to have covered more ground.

He didn’t cut such a figure at the end of Wednesday’s race, although he put in the required effort.

“That’s as far as I can go and I’m proud of that and the distance that I managed to cover today but the most important point today was the awareness that we’ve brought to hemophilia,” he explained.

Dowsett, who wears a necklace displaying his medical needs while riding, has constantly pointed to the condition as the reason he stayed away from sports such as football and rugby, instead choosing to become a competitive cyclist. His mother used to insert knee and shoulder pads into his school uniforms as a means of preventing injury; he also wore special shoes.

To date, the former record holder is the only known elite sports personality with hemophilia and has special dispensation from the Union Cycliste Internationale to inject himself with Factor VIII, a clotting protein, every 48 hours. Such would otherwise be exempted by the governing body’s no needles policy which has been around since 2011. 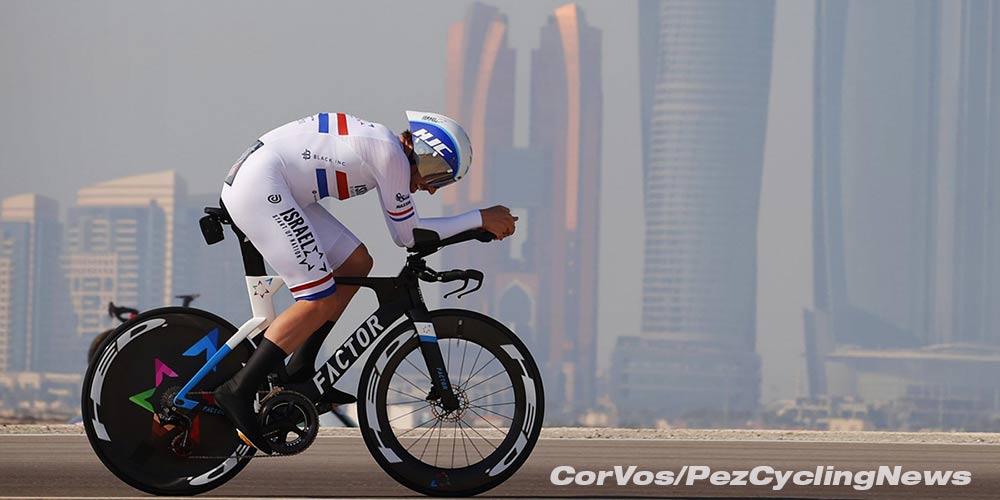 Dowsett is responsible for starting up a charity called Little Bleeders that has worked to raise awareness of hemophilia and to provide support for young persons suffering from the condition, plus encouragement to get active in sports. He has a YouTube channel dedicated to detailing his life as a professional cyclist.

“With my charity Little Bleeders we set up the sports fund and especially through COVID it’s been such a tough time for families because money has been tight,” he noted. “We’ve had countless messages from parents who have said they’ve struggled to get their kids to swimming classes because the money isn’t there and that’s what we’re trying to do with the charity, provide that small amount of help through our Just Giving page.

“That’s what today was about, success or failure, I threw my hat in the ring and I tried.”

Persons interested in donating via Dowsett’s Just Giving page can head to his site, which can be found here.

French Star of the 80’s and 90’s Bruno Cornillet Gets PEZ’d!

Tom Dumoulin Back Riding After Car Accident Two Months Ago