In the ancient city Koblenz, Germany, where Julius Caesar built a bridge across the Rhine, the presentation of the 2014 Russian Team Katusha took place. Although part of the team already took part in races in Australia and Argentina, the full roster of Katusha Team has only now been presented in the colorful ceremony held at the headquarters of the famous bicycle company “Canyon”, for which the new season will be the third one together with Katusha.

The event was not only the traditional presentation of the team, but the celebration of the 5th anniversary since the establishment of Katusha and the Russian Global Cycling Project.

The presentation was held in the presence of a large number of guests, journalists, and enthusiastic fans, who were able to see their favorites at arm’s length.

One of the main points of the presentation came in the form of a symbolic gift, which the head of the Russian Global Cycling Project and the President of ITERA International Group of Companies Igor Makarov made to Katusha General Manager Viacheslav Ekimov. A Big Golden horseshoe, which was presented by Igor Makarov, is supposed to bring luck to the whole team Katusha in the new season, keeping with tradition in Russia where the horseshoe is a symbol of good luck and happiness.

– I thank Igor Makarov for a great gift. It will undoubtedly be a lucky talisman for the team Katusha. In the team’s office we have a great location for this horseshoe – it will be the first thing to greet the employees of the team, riders, staff and, of course, to bring them and the whole team good luck and happiness. I am sure that the new season will be successful for our team. Huge work has been done; we have invaluable experience, forces, capabilities and powerful support from sponsors and partners. Therefore, the victory will be the natural result! – said Viacheslav Ekimov from the stage.

Of course, the central event of the evening was the presentation of the rider’s line-up for 2014. One by one the riders went out on the stage to receive a huge welcome by the guests of the event.

On the stage, ceremony moderators, renowned commentator Sergey Kurdyukov and brilliant journalist Maria Komandnaya asked questions to some of the riders.

“I am proud to wear the Russian national champion jersey and I hope to show it early in the year. My goals are the classics, especially the cobbled classics. I really look forward to them. After a break I hope to perform in the Tour the France. I’ve already won a stage in the Tour de Suisse. Why shouldn’t it be possible to do the same in the Tour?” – said Vladimir Isaychev.

On the stage of the Canyon showroom, the best Katusha sprinter Alexander Kristoff made known his ambitions for the classic races as well as sharing his goal for 2014 of beating his record six victories from the previous season:

“People know me as a sprinter but I don’t have the explosivity of riders like Cavendish and Kittel, but I can beat them in the harder races and that’s my goal. I hope to surprise everyone in the Spring classics but also in the Tour. The tour starts in England and I have always performed well in British races.”

One of the main guests of the ceremony was, of course, the President of the Canyon company Roman Arnold, who wished the Katusha Team a lot of bright and memorable victories in the new season, expressing hope that not just a horseshoe, but also Canyon bikes will bring good luck and success to the Russian team.

A special bike created as the Canyon Aeroad CF was presented by Roman Arnold to the winner of the 2013 UCI WorldTour and leader of Katusha Team, Joaquim Rodriguez. He received great applause and admiration from the crowd. He also spoke about his plans for the new season:

“I felt at home from the beginning in Team Katusha and that’s still the case. We are a group of friends. Here we have no language or culture barriers. We’ve proved in the past years that we are on the right track. 2014 should be the year that I win a Grand Tour. I have already been on the podium many times and now I want to finish as the winner of the Giro or the Vuelta, or why not of both? And to be honest, I like the classics just as much as the grand tours – Flèche, Liège or Amstel, it doesn’t matter. We will show our Katusha colors the entire year. We have a strong team. We have the experience and in the Russian group there is promising youth and future. We are ready.”

With everyone acknowledging that the team presentation was the best in all five years, the ceremony ended with the anthem of the Russian Federation and official photo shooting and team’s communication with representatives of the media. Afterwards the guests and participants of the presentation went for dinner in the magnificent Palace Kurfürstliches Schloss on the banks of the Rhine. 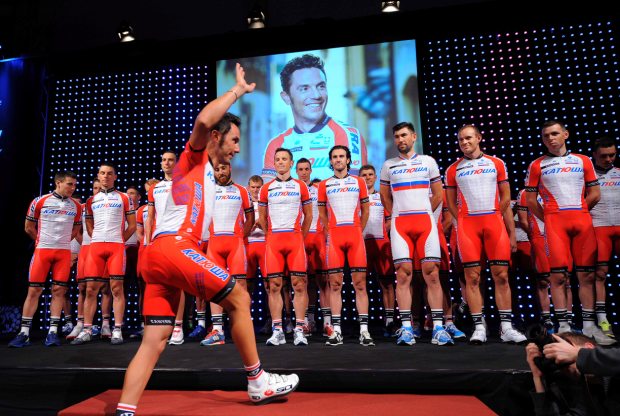 At The Start Of The Copenhagen 6