Cult Energy Pro Cycling’s André Steensen was the best junior rider of his generation topping the World Rankings. He was targeted by multiple teams because of his obvious talent but he chose the Danish based, Team CSC-Saxo Bank in 2008 where he stayed for four seasons before ending his career due to a knee injury when riding for Cult Vital Water – the current Cult Energy Pro Cycling. The team management didn’t hesitate to hire André as a DS. His intelligence and tactical skills were simply too valuable to let go.

Sunday, he had his debut as a sports director and we asked him a few questions about his experience in GP Costa degli Etruschi where Russell Downing took fourth place after a very aggressive finale from the Danish team.

“First and foremost, it was intensely stressful to sit far down the caravan because there is a second race going on between cars and motorcycle officials moving up and down on one side, while on the other, riders are on their way up to the peloton after being dropped. In this hectic environment, being called up to a puncture, which should be done swiftly, truly requires a steady hand and mind. But it was interesting to follow the course from down there and the main difference was that I towards the final climb felt the same kind of tension in my stomach as I’d normally feel before the start of an important race. During a race, I was never nervous because of my focus and the adrenaline was always already pumping. But in the car, I didn’t feel the adrenaline before the finale and it was quite a remarkable sensation.”

What was it like watching the race compared to being an active part of the race development?
“It has always fascinated me having to try to make a plan and control the tactical setup because there are so many variables you have to take in to consideration and some more unpredictable than others, in an attempt to win a bike race. Planning means going through as many scenarios as there may be before presenting a setup also involves the input from the riders. We are working as a unit literally believing that together we are stronger. To some degree, I want to get as much input as possible in order to have the most accurate information before I make a “calculation” or probability assessment from the exact data and experience from previous years. I also believe that this is where I differ from most people in our work field as I do not just base my predictions on past events, but my ratings are based on an analysis of a collective sum of information and the more input you have, the greater chance of tactical success. But I guess, it often requires more consideration than what you might think.”

What was the biggest challenge?
“The biggest challenge was to tell the boys not get into any breakaways from the start of the race. Often it’s a team’s chance to flash the jersey in case you should miss the finale. However, I considered it to be very unlikely to go all the way with the morning break and with riders like Russel, Fabian and Rasmus we’d have a good chance for a result so I chose to ask the riders to support my idea. A little into the race, I started having second thoughts as the gap was becoming quite big and the problem was that the other sports directors were playing the waiting game. I had a brief chat with Wegmann who acted as our road captain and he was confident that the Italian teams would start their engines eventually. A few moments later, it happened as Fabian predicted just when it was almost too late. From then onwards, it was full gas throughout the finale and I was happy that none of our guys had been wasting energy in front of the pack. But it was cool witnessing a plan from my desk was executed on the bikes. You can always is always create a good setup but it requires strength, motivation and dedication to take chances in dangerous situations, and the boys showed no mercy themselves out there. I’m convinced that we will have a good season because they exhibit our core values; commitment, unity, loyalty and trust.”

What are you doing between races?
“When I’m not off to do races, I study BSc IT (bussines administration & information-system) at the University of Aarhus where I live. I actually get useful tools in my profession as a sports director, so it’s beneficial for everyone. I have always liked switching back and forth between the academic world where you use your brain a lot and constantly need to abstract yourself to a higher level, and then on the other hand have a job in the world of cycling, which quite often is the opposite; down to earth, people are very straightforward, and the inside jokes are anything but academic,” Steensen concludes with a smile. 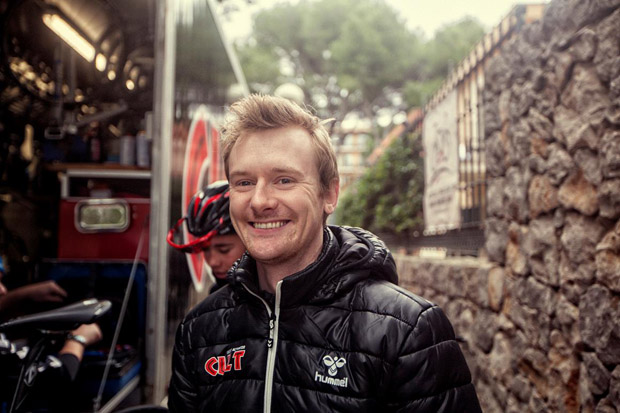