Area Zero D’Amico super in the Vuelta a Colombia: first for Andrea Pasqualon and third for Fabio Chinello.

It was a day to remember for Area Zero D’Amico on the roads of Colombia. Andrea Pasqualon won the 7th stage in the Vuelta a Colombia that played out on the circuit at Dosquebradas-La Paila-Armenia-Dosquebradas for a total of 196 km. With a fantastic powerful sprint the “Falcon from Enego” came in first across the finish line, surpassing Spain’s Oscar Sevilla (Une-Area-Metropolitan). Success was made complete for Area Zero D’Amico with the third place by Fabio Chinello, who was already fifth in the 4th stage. In the general classification however the Colombian Miguel Angel Rubiano (Colombia- Coldeportes) remains in the lead. Andrea Pasqualon continues wearing the jersey for best foreigner in the Vuelta a Colombia.

This is the most important achievement so far for the all-Italian continental formation making their debut in the pack this year led by team managers Ivan De Paolis and Andrea Tonti. It is also their second significant success after another feat by Pasqualon in June at the GP Sudkarnten in Austria.

“It was a perfect day,” says Andrea Pasqualon, born in 1988. This is his third bulls-eye in his career among the pros. “We had studied the stage in every minimal detail with Ds Massimo Codol, envisioning and testing the last 3 km of the route to get a measure of the arrival. Everything went according to plan. I’d like to thank my team mates, who for the entire stage did an extraordinary job to put me in the best condition to go for a great sprint, in particular Paolo Ciavatta and Fabio Chinello, who then also managed to close out in third place. I’m thrilled with this victory. I’d like to dedicate this success to my girlfriend Tanja who always supports me, and overall who is making life easy for me, giving me a serenity I’d never felt up until now, both before and after the races; it’s exactly what I need in order to give it my all. I also want to thank all the staff on Area Zero D’Amico, in particular team managers Ivan De Paolis and Andrea Tonti, Ds Massimo Codol and our trainer Paolo Santello. Last year was hard for me, but they believed in me and got me involved with the Area Zero project and now I hope I’ve repaid them well with this fantastic victory.”

“I’m happy for the win, for my placement and for the entire team,” says Fabio Chinello. “What a day…we rode hard and fast without a minute’s respite, right from the very first kilometer. On the last climb Team Colombia took over the situation with the leader Rubiano, setting a nice, regular pace. Meanwhile we got organized to get a good take on the last three, slightly climbing kilometers that led to the finish line and get Pasqualon out front in the best positions. Andrea took off long and he cut a perfect sprint…passing Sevilla in the final meters.”

“We came to Colombia more than anything to allow our guys to gain some important international experience and test themselves in a high level stage race,” explains team manager Ivan De Paolis. “This victory represents the perfect prize for the fantastic work that everyone, athletes and staff, has been doing with dedication and commitment since the beginning of the season. I truly congratulate Andrea and the entire team. It’s a victory we dedicate to our sponsors as well, who have believed in the Area Zero project and supported our young riders in this adventure. Winning is always the best, but we mustn’t forget all the other brilliant results we’ve obtained this year. In every race, Area Zero D’Amico has always given 101% to make a good impression.”

Catch all the news and results from the Vuelta a Colombia at: https://federacioncolombianadeciclismo.com/ 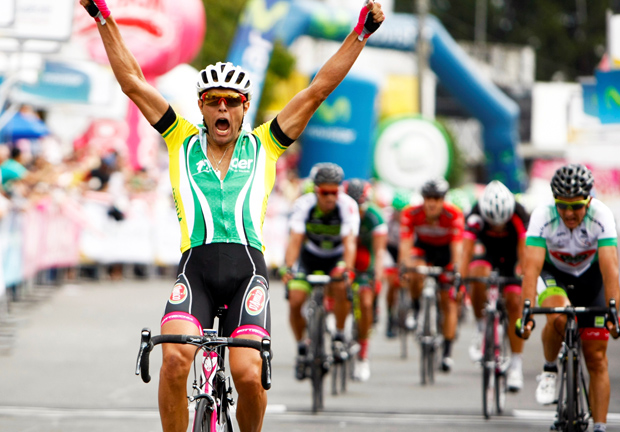