Team Novo Nordisks rider Andrea Person (Italy), in another strong sprint to the finish, came in 11th in the final stage of Post Danmark Rundt – Tour of Denmark. At the end of 165km from Roskilde to Copenhagen, the sprinters once again set things up for an exciting finish and a stage win for British rider, and former world champion, Mark Cavendish. Andrea Peron narrowly missed a top ten position in the final stage by only a few centimeters. The overall win of Post Danmark Rundt – Tour of Denmark was taken by Dutch rider, Wilco Keldermann (Team Belkin), who took the Yellow Jersey with his stage win in the ITT Saturday night in Holbæk.

Team Novo Nordisk was again very active throughout the race to set up Andrea Peron and Martijn Verschoor for the final. “The team proved themselves with another offensive race and showd a great performance in this exciting final”, says Vassili Davidenko, Corporate Vice President Cycling Operation of Team Novo Nordisk. Verschoor was involved into a crash only eight kilometers from the final. “Four riders in front of me crashed and I couldn’t go round any more”, the Duthc rider says. After hidding the ground, Verschoor finished, led by his teammate Justin Morris some seconds behind the bunch.

“We tried again to go in the breakaway, but a race is a race”, Davidenko goes on to say. “But Martijn and Andrea together can show a great sprint, so it was a bad moment when Martijn crashed; but at the end Andrea found a good backwheel and finished 11th. Could be better, of course, but it’s just his first season, and it’s our first time in Denmark. Next year we will be back, and we will be better.”

The final stage was a perfect close for a fantastic week. “We have seen a really amazing crowd along the streets of all stages of this week,” says the Irish rider Stephen Clancy,  “but the public here on the final lap in Frederiksberg was really tremendous. They pushed us again and again. This was 60km, ten laps in total but it felt so so short, the atmosphere was fantastic, the pace was high and we got an 11th place – nice way to finish off a good week here in Denmark. Thanks to everybody who came and joined us, this stage will be unforgettable.”

Post Danmark Rundt – Tour of Denmark kicked off on Wednesday with Andrea Peron coming in 9th in the sprint in Varde. “That was a great start for Team Novo Nordisk giving it’s debut here in Denmark”, says Davidenko. “But when you saw Andrea coming in with two flat tires, you could imagine what would have been possible already at the first stage.”

During the second stage, Dutch rider Martin Verschoor showed himself and the logo of ‘Changing Diabetes’ by joining a breakaway. Only a few kilometers before the finish, the five riders were caught by the bunch on the final lap in Sønderborg- the escapees never had more than 2:20 minutes lead.

As Vassili Davidenko sums it up: “We came to Post Danmark Rundt – Tour of Denmark to get a podium. Plans do not always come true. But all riders showed great teamwork- and even with only seven riders, since Paolo Cravanzola had to quit the race after his crash during the first stage- Team Novo Nordisk has proved again that diabetes will not prohibit our success. We can be proud of the efforts we have seen here, and now we are ready for the upcoming challenges like USA Pro Cycling Challenge in Colorado, Tour do Rio in Brazil and Tour of China. We are really looking forward to all of them. The team develops race by race, and the next podium or even the first win is not far off.” 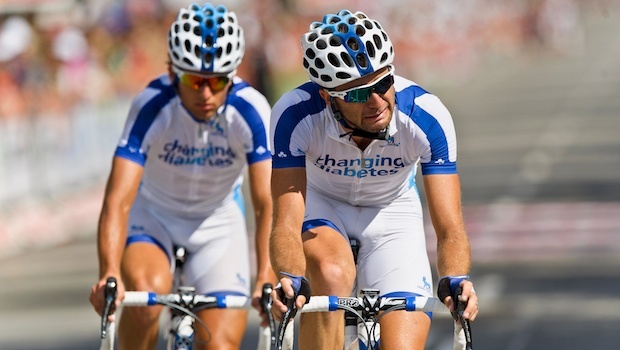