Angel Vicioso makes his first steps after his femur fracture

Update on injuries of Vicioso, Rodriguez and Caruso.

Two days after his successful operation in the Villa Stuart Hospital in Roma, Angel Vicioso was able to make his first steps with a walker in the hallway of the hospital. If Vicoso’s health situation continues to evolve well, he is expected to be able to leave the hospital by the end of the week. At home Vicioso will need to recover in the coming weeks from the surgical procedure, after which he can start his long rehabilitation.

After his crash in Cassino, in the 6th stage of the Giro d’Italia, a complex threefold right femur fracture was diagnosed. One day later, on Friday May 16th, Angel Vicioso underwent a 3,5 hour operation. The doctors were able to repair the thighbone through intramedullary fixation (nail insertion). Addional screws were used to fixate the femural neck as well as some loose bone material. Post-operational X-rays showed a succesful intervention as well as a good alignment of the femur.

On Monday, May 19th, Joaquim Rodriguez, who broke his right thumb in the same crash, underwent a succesful operation as well. In Barcelona a pin was introduced in the phalanx to fix the fracture.

In Cassino X-rays revealed no fractures for Giampaolo Caruso in addition to his scaphoid fracture after his crash in Belfast, but as the rider still complains from pain at the left hip, he will undergo an MRI scan on Tuesday, May 20th. 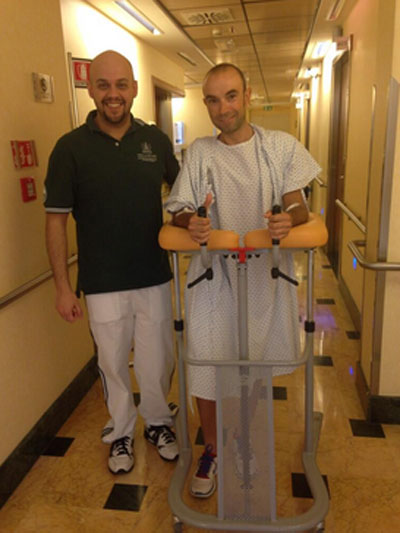