Annemiek van Vleuten On The Podium In Drentse

The performance of the Bigla Pro Cycling Team was again impressive on Thursday as the team scored its first European podium of the season.

Annemiek van Vleuten was part of an 8-rider break that formed late in the race and sprinted to third place behind Giorgia Bronzini (Wiggle-Honda) and Valentina Scandolara (Orica-AIS) in Molecaten Drentse 8 van Westerveld. It was the Dutch individual time trial champion’s second consecutive top ten after finishing ninth in Strade Bianche last week.

The race started fast with the bunch strung out in the first hour of racing. Several groups formed on the road but after 65 kilometres of racing, everything was back together and with no wind presence, it looked like the race could be set for a bunch sprint.

However, as the race hit the final finishing circuit, several riders were determined to test the biggest teams and a split was caused on a narrow section of road where seven riders got off the front. Van Vleuten then went after the group which would end up being the race defining move.

I’m actually a little disappointed with third because I felt really strong today but I knew Bronzini was fast and tried to attack in the final but I was heavily marked. I need to make special mention of Lotta Lepistö and Joëlle Numainville because they were super strong today and if I wasn’t in the break, they would be there. I saw 7 girls riding away and I thought I just had to be there especially as there was no Rabo and no Boels there so I thought it’s a good move to be part of. It wasn’t ideal to have Bronzini there and we tried to play poker in the final but still it’s not bad for the team to get on the podium. I just love this team and racing with the girls so we are looking forward to Saturday. 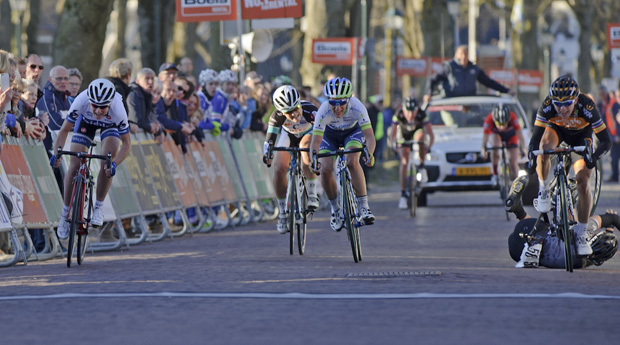