ARCTIC RACE OF NORWAY 2014-Thor Hushovd: “A bike race at the North Cape, it’ll be amazing!”

Thor Hushovd is the ambassador of the Arctic Race of Norway (August, 14th-17th) for the second straight year. Last year, he didn’t only promote the inaugural race but also ended up winning it. He’ll call it a career, aged 36, at the end of the current season, but he’s ready to tackle the ARN with ambition again after his brilliant victory in 2013. At the end of a Tour de France that revealed another Norwegian champion, Alexander Kristoff, “the Viking” is ready for a last challenge around the North Cape.

“From the beginning I’ve been a strong supporter of this project that consisted in bringing my colleagues to the far north of Norway”, explained the 2010 world champion. “As much as I could, I’ve always tried to help the organizing committee and share my ideas to make this race a success, so I feel being part of this cycling event more than any other one. It’s a very special feeling. As a rider, I couldn’t make a better debut. The Arctic Race of Norway is gonna be there for a long time so it’ll be nice to look back at what happened in the first edition. It’s always gratifying to have your name on a record book, but making the first line of something that will become historical is even better.”

“Since August last year I’ve heard a lot about the Arctic Race of Norway from riders and staff members of different teams”, added the man who wore the colors of national champion from Bodø to Harmstad in 2013 and became the icon of the event. “People who took part in the first edition want to go again. Others tell me that it was beautiful to watch on TV or to follow on the internet. Fans obviously keep telling me they loved it! The most touching comment is probably to hear people saying they want to visit the north of Norway on their bicycle.”

The second edition of the ARN will go 400 kilometres further north to the North Cape at the end of stage 1. “It’s going to be amazing”, Hushovd predicted. “This race brings cycling to the extreme north of the world! I’ve never been there but I’ve always wanted to and I’ll do it with a bike race that I am an ambassador of. I hope the popularity of the first edition will be repeated but I’m pretty sure it’ll be the case because even though very few people live there, cycling lovers are prepared to travel far and anybody on the planet can feel concerned because of the strong presence of the event on social networks. From the beginning, organizers have put a great effort in this new way of communicating.”

For each stage, internet users will be able to vote for the “Viking of the Day” to award the most courageous and persistent rider. Hushovd is likely to receive a lot of mentions… 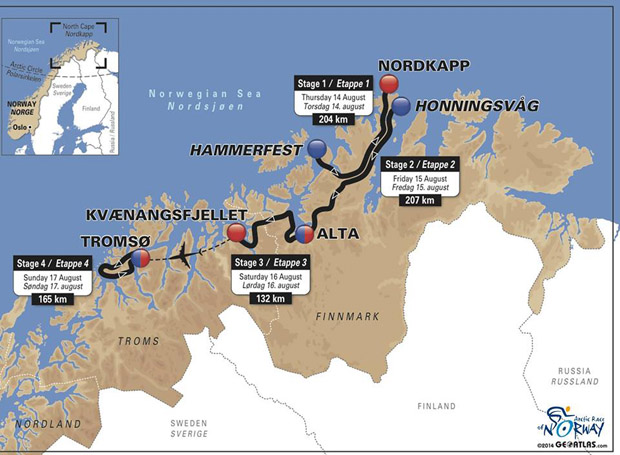 Palmer steps away from cycling – for now