In 2014, for the first time in Team Colombia’s short history, Darwin Atapuma won’t be part of Claudio Corti’s troops at the start of a new season. After two seasons spiced by as many wins – the most recent in Tour de Pologne stage 6 – and marked by a consistent progression, Darwin is now set to make his debut in the World Tour ranks.

“It will be a very different experience – Atapuma explained -, I’ll be part of one of the biggest teams in cycling, and I am looking forward to face such a challenge. On the other hand, I am really sorry to leave a context I have blended in perfectly, with friends and a number of people who have been huge for me in this couple of years. Without them, I would not have made it to the World Tour.”

“I will always be grateful to Claudio Corti for believing in me, and getting me the opportunity to compete on the World stage. Claudio and the whole technical team always made me feel important, giving their best to support us in any aspects, not only in the sport practice: getting used to a different place and lifestyle was not easy, but sports directors, masseurs, mechanics, never let us down or made us feel alone.”

After landing in Italy in 2012 January, El Puma was the one to clinch the Team’s first success in 2012 Giro del Trentino stage 4, atop the Passo Pordoi. “It was the biggest day in my career,” added Atapuma, who managed to reclaim his elite status barely a month later in Tour of California’s queen stage to Mt. Baldy, where he was edged only by an impressive comeback by Robert Gesink.

In his second year in Europe, Atapuma took a top-20 GC placement in his first Grand Tour, the Giro d’Italia, and took his and the team’s first World Tour win at the Tour de Pologne: after grazing the top spot in Madonna di Campiglio, El Puma managed to raise his arms in stage 6 in Bukovina Tatrzanska, with an impressive show of determination.

“In 2013, I showed everyone – and myself in first place – that I could hold on with the strongest in the biggest races in the World. I owe that to the great work made with Sports Directors Valerio Tebaldi, Oscar Pellicioli and Oliverio Rincon, the whole Team Colombia staff and my teammates, who shared my path in a beautiful experience that will imprint my sports career forever.”

Atapuma’s final major satisfaction as a Team Colombia rider came in September, when he was selected to race the Elite World Championships’ Road Race for Colombia for the very first time. “I was proud to represent one of the strongest national teams at the present time, the expression of a movement that is arguably growing like never before. More and more athletes from Colombia are getting their chance in top cycling, and I believe Team Colombia’s project is having a huge role in that, opening doors for young prospects and attracting the media attention on our movement.”

“Next year another guy from my village, Tuquerres, will be part of Team Colombia: Pantoja, whose name is Darwin just like me. I hope he, and a lot of Colombian youngsters, will have the opportunity to make the same, outstanding experience I did, in a really unique team in today’s cycling. I am not only talking about technical stuff, top organization and cycling experience, but an actual human bind I can hardly see in any other outfit. And I am going to miss that a bit, I already know that,” Atapuma said.

General Manager Claudio Corti and the whole Team Colombia staff thank Darwin Atapuma for two years of great work, and wish him all the best for his future career. 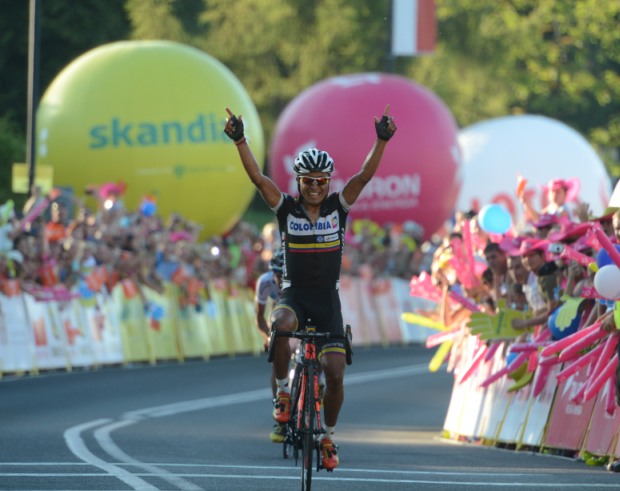