Neilson Powless kept his lead in the SRAM “best young rider” standings and the Axeon Hagens Berman Cycling Team finished two riders in the top 10 after another impressive show of aggression in the final kilometers of Wednesday’s stage of the Amgen Tour of California.

The 217-kilometer race from Morro Bay to the Mazda Raceway Laguna Seca was a virtual replay of Tuesday’s stage. A pair of Axeon Hagens Berman riders were on the attack in separate solo moves leading up to a fifth place by Tao Geoghegan Hart and sixth for Powless. Combined with Ruben Guerreiro’s 15th-place finish, the American Under 23 development team maintained its runner-up position in the team classification.

Geoghegan Hart said he had also planned to attack, potentially to take back time conceded Tuesday on the finishing ascent of Mount Gibraltar Road. 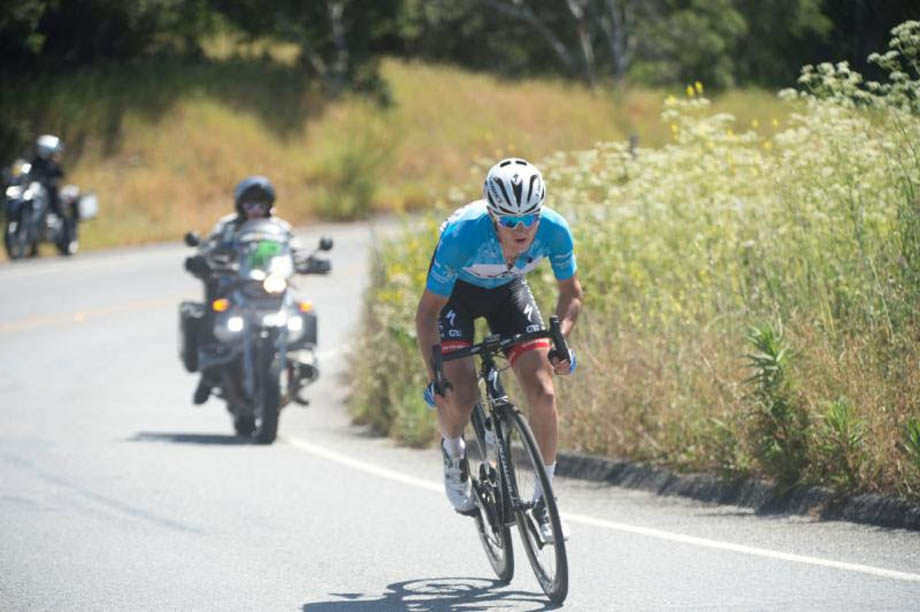 For a second straight day at the Amgen Tour of California, Axeon Hagens Berman’s Greg Daniel was on the attack late in the race. (Photo: ©Casey B. Gibson)

“Yesterday, I think I suffered in the heat,” the British winner of Trofeo Piva said. “It is not really my type of day to go easy and then just 20 minutes of full gas. It doesn’t really suit me. It’s not the type of rider I am. I wanted to attack on the climb today but it was a headwind on the Mazda circuit and (race winner) Peter Sagan was intent to keep it together for him.”

Like Tuesday, it was Axeon Hagens Berman’s Greg Daniel who lit the fireworks with an attack out of the day’s seven-rider breakaway. Wearing the Amgen Breakaway from Cancer® “most courageous rider” jersey that he earned on Tuesday for a nearly identical move, the 21-year-old looked good for a time. But attacks from a rapidly-dwindling chase group closed the gap.

“When I looked back, I saw I only had a couple seconds going into the final king of the mountain sprint,” Daniel said. “I just thought I had to give it everything. Eventually, I heard people breathing behind me and that is super demoralizing. One second you are going for the stage win and the next moment it is over.”

But just as soon as Daniel was brought back on the first of two climbs on the raceway circuit, teammate Ruben Guerreiro threw down his own attack. Tucked low on his Specialized S-works Tarmac, the 21-year-old from Portugal made his own bid for the win.

“When I attacked, I had good legs,” Guerreiro said. “But it was super windy on the front and super hard. I did about two kilometers in the front and once I got caught, I did not have any more power. But Neilson and Tao were both in the top 10. So that was good for us.”

Axeon Hagens Berman General Manager Axel Merckx said the team’s intent was to get someone in the breakaway and then focus on the finish.

“Tao had an absolutely fantastic day here today, he said. “That’s where you see where you need a full team to whelp everybody out in good and bad days. He’s proven that he can come back from a bit of a disappointing day from yesterday. So to be fifth today is quite amazing.”

Axeon Hagens Berman Sport Director Jeff Louder the team spent a lot of time in its pre-race meeting studying the finale. So he wasn’t surprised to see Daniel in the breakaway. The 21-year-old finished runner-up on a stage here two years ago.

“That’s what Greg does best. He’s really good in the breakaway. He has a big motor and he has done it so much that he knows his limit. So I wasn’t surprised. But I was a little surprised because he had done something similar the day before. That just shows his depth and ability.” 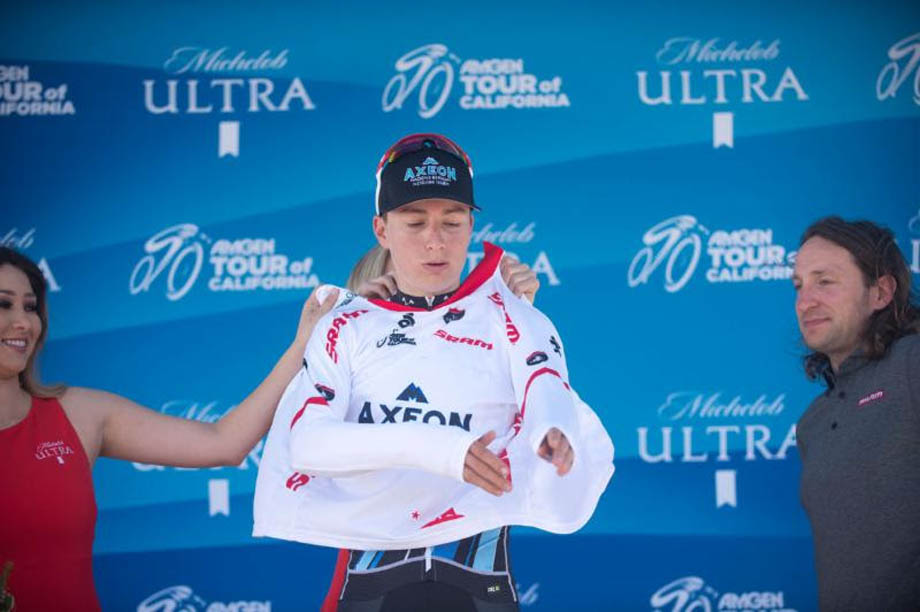