The Axeon Hagens Berman Cycling Team captured the team title at Volta ao Alentejo for the second straight year Sunday while also placing four riders in the top 11 in the final standings. 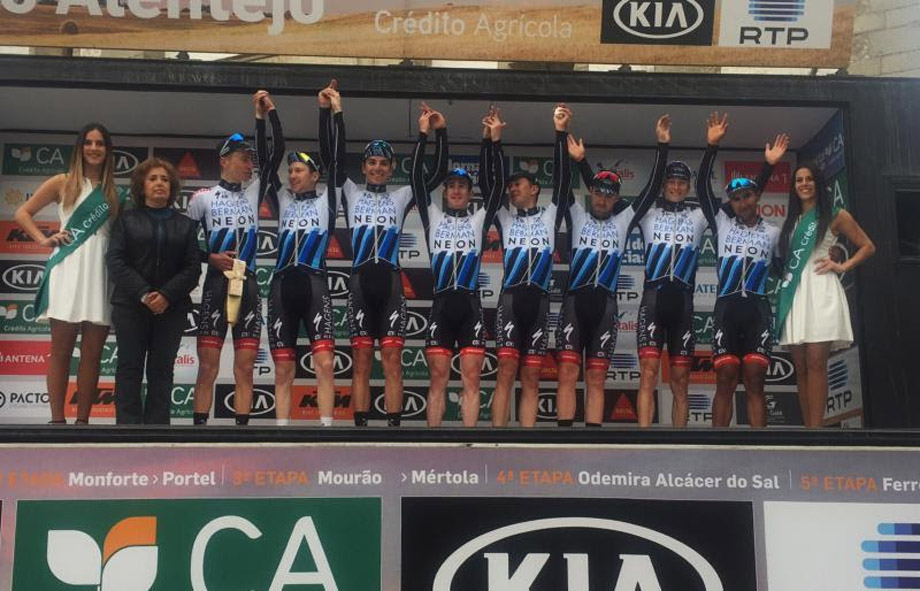 Irish Under 23 national time trial champion Eddie Dunbar was best-placed overall for Axeon Hagens Berman in fifth, while Owen was sixth. Jhonatan Narvaez, the Ecuadorian Under 23 national time trial champion was 10th, and American Adrien Costa was 11th. Dunbar wore the “best young rider” jersey for one day and finished fourth on Stage 4. He and teammates Owen, Narvaez and Costa finished second, third and fourth, respectively, in the best young rider classification.

Other members of Axeon Hagens Berman’s winning team were Ivo Oliveira of Portugal and Americans Will Barta and Neilson Powless. Oliveira said his first race with the team was a special one, particularly after a bad crash on Friday nearly knocked him out of the race.

“For a moment, I thought I was going to have to stop,” the 20-year-old said. “I was sitting on the ground, near the car for 10 minutes and I was afraid that my femur was fractured. But I talked to the doctor and he put me back on my bike. Unfortunately, I could not help the team so much that day. But I made it to the finish and made a good recovery for the next day.”

Axeon Hagens Berman Sport Director Koos Moerenhout said winning the team title in the first race of the season was a good sign.

“It shows you are not depending on one or two riders,” he said. “Every day, many riders needed to be with the best guys. Every day, we battled for the win and we succeeded once. It is also proof that in depth we are doing well. The race may have been decided in bunch sprints – which is OK for us – but we have many riders who can also do well themselves when the finishes are going up.”

Colombian squad Manzana Postobon Team was second in the team classification, 32 seconds back, while Sporting Clube de Portugal/Tavira was third, at 51 seconds. The team title was the Axeon Hagens Berman’s second straight at the UCI 2.1 classification race and nearly the third straight. In 2015, Axeon Cycling finished second – by five seconds – to the Polish ActiveJet Team.