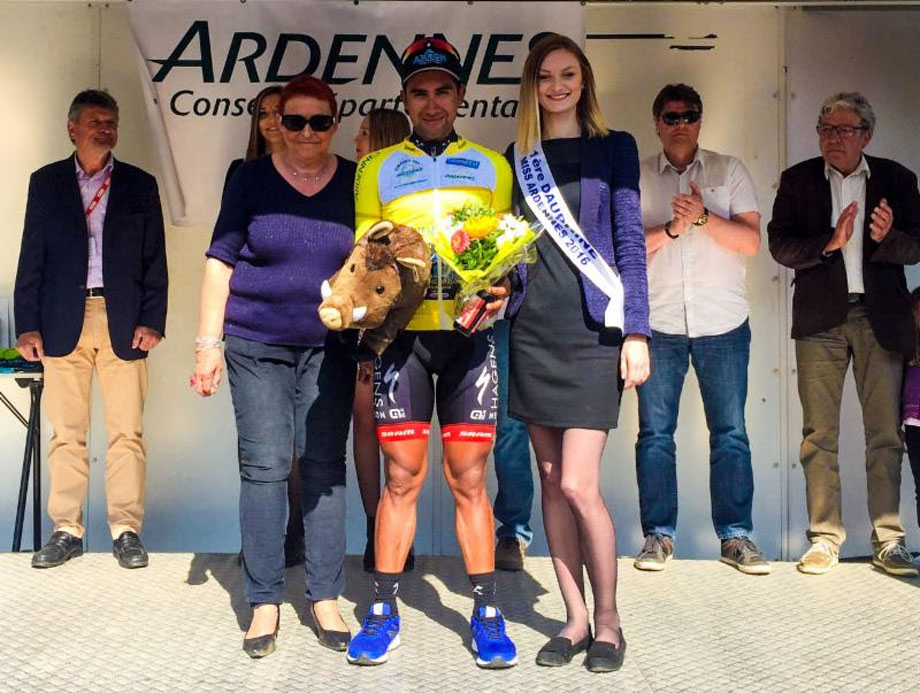 With one stage to go at Circuit des Ardennes, Jhonatan Narvaez of the Axeon Hagens Berman Cycling Team is leading the French race. (Photo by Jim Anderson.)

Narvaez finished second to Maxime Vantomme (WB Veranclassic Aqua Protect) and in a breakaway group of four on the first of two stages Sunday, a 76.1 kilometer race from Nouvion-sur-Meuse to Floing in northern France. The 20-year-old from Playón de San Francisco, Ecuador, takes a 20-second lead over Vantomme into the afternoon stage, a 103 km race on a circuit in the town of Charleville-Mézières

“We had a plan this morning and it was perfectly executed,” Axeon Hagens Berman Sport Director Koos Moerenhout said. “But there is still one stage to go and nothing has been won yet. But we have a 20-second lead. So it is so far, so good.”

With about 25 km to go in the morning stage, Narvaez put in two attacks on the last categorized climb, the Côte de La Garenne. Only five riders could follow at first, and the breakaway soon dwindled to four as it traversed two uncategorized climbs and a downhill plunge in the last 20 km. By the time the four reached the short climb to the finish, they had gained nearly a minute on a shattered peloton that included previous race leader and Stage 2 winner Rasmus Guldhammer (Team Veloconcept).

“It was a hard stage and behind the front group, it was very difficult to organize a chase,” Moerenhout said. “Jhonatan did very well by taking the responsibility to keep his group going. And behind, with five kilometers to go, we had everybody else but Jhonatan in the group, which was no longer a big group.”

Two other Axeon Hagens Berman riders finished in the top 10 on the stage: American Will Barta was sixth and Australian Michael Rice notched his first top 10 result in a European race by finishing ninth.

Barta said the stage could not have gone much better than planned.

“We used the strength of the team to attack all day and eventually the leader’s team began to have difficulties,” he said. “Then Jhonatan attacked and the leader became isolated. It was as much as we could ask for to have the result come through.”

“For this afternoon, it will definitely be a hard one, but I think we are very much up to the task of defending.”

Narvaez is in his first year with Axeon Hagens Berman and leads a race for the first time in his second season of Under 23 competition. He used a runner-up finish on Saturday’s stage to get within four seconds of the overall lead. On Friday, he finished 134th on Stage 1, but in the same time as the stage winner, after half the peloton was directed off course in the last two kilometers.