Chris Lawless made the most of his aggressive approach to the opening stage of Triptyque des Monts et Châteaux Friday by sprinting to a runner-up result and into the overall lead of the Belgian stage race. 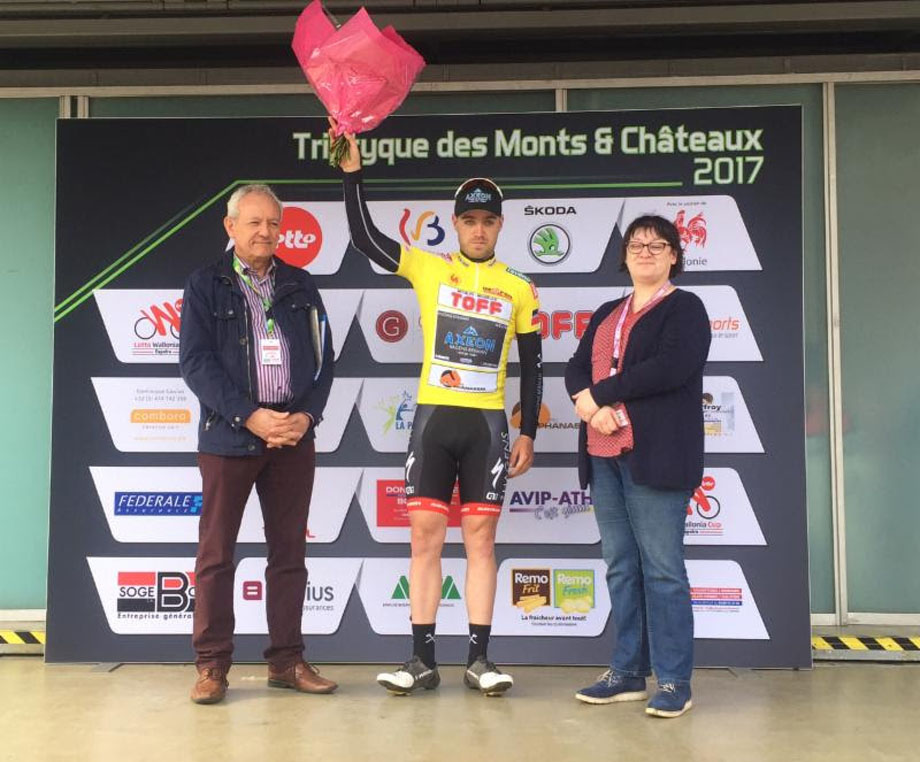 The Axeon Hagens Berman Cycling Team rider said he felt good after a solid block of training at his home in Manchester, Great Britain, heading into the three-day, four-stage race. And he let his teammates and Sport Director Koos Moerenhout know it Thursday night.

“I made it clear to the guys in the team meeting that the general classification was in the back of my mind,” Lawless said. “But winning the stage was always the main goal. So they helped me with the bonus sprints. I am really happy to take yellow.”

The reigning British national criterium champion was overtaken by Daniel Auer (Team Felbermayr-Simplon Wels) 150 meters from the finish of a windy, 166.5-kilometer race from Flobecq to Warcoing in the Wallonie region. But bonus time gained from winning two intermediate sprints, as well as another six bonus seconds on the line, allowed him to slip on the race leader’s jersey. The 21-year-old also leads the intermediate sprints classification.

Powless On The Attack
Until everything came back together in the final kilometer, it looked like another rider from Axeon Hagens Berman might take the win. American Neilson Powless attacked with eight kilometers to go and soloed for the next four before a group of three bridged up to him. The quartet worked together, but was overtaken by a concerted chase from teams hoping to see the race end in a sprint.

“I looked back and saw Chris was in a pretty solid position behind some teams that were lined up,” Powless said. “My group got caught in a technical section with about 300 meters to go and I actually tried to attack again. But the guys behind had a lot of momentum and blew right by me. I was trying to hold on when Chris blasted by and launched his sprint. That was pretty exciting.”

Lawless said he was hoping Powless could hold on, but was in good position to go for it himself, thanks to the efforts of teammate Eddie Dunbar. The Irish Under 23 national time trial champion shepherded him through a twisty, left-right-left section through the streets to the finish.

“Eddie looked after me and made sure I was first going into the last corner,” Lawless said. “The guy who won came around me with about 150 meters to go and I just could not match him. He won by about a bike length.”

Powless held on to finish seventh. Dunbar placed 18th and American Will Barta – who helped drive several breakaways in the second half of the race – was 45th while Logan Owen was 70th, all in the same time as the stage winner.

Same Approach For Saturday
Lawless, one of eight riders new to the Axeon Hagen Berman team this year, takes a two-second lead into Saturday’s 148.9 km race from Frasnes-lez-Anvaing to Péronnes-lez-Antoing. Moerenhout said the team will take the same approach that it did on Friday’s stage.

“We were very aggressive, always being present with at least one of us in every breakaway,” he said. “So as a team, we are riding well. We will see about the coming days. Sunday’s time trial will be a big decider, but we have a team not only to defend the lead for Chris but also one to do well in the sprints.”

Lawless’s runner-up result was his third second-place finish on the season. He was also runner-up on Stages 3 and 5 of Volta ao Alentejo in Portugal in late February. This marks the first time he has led a race since winning the opening stage of the New Zealand Cycle Classic in January of 2016. 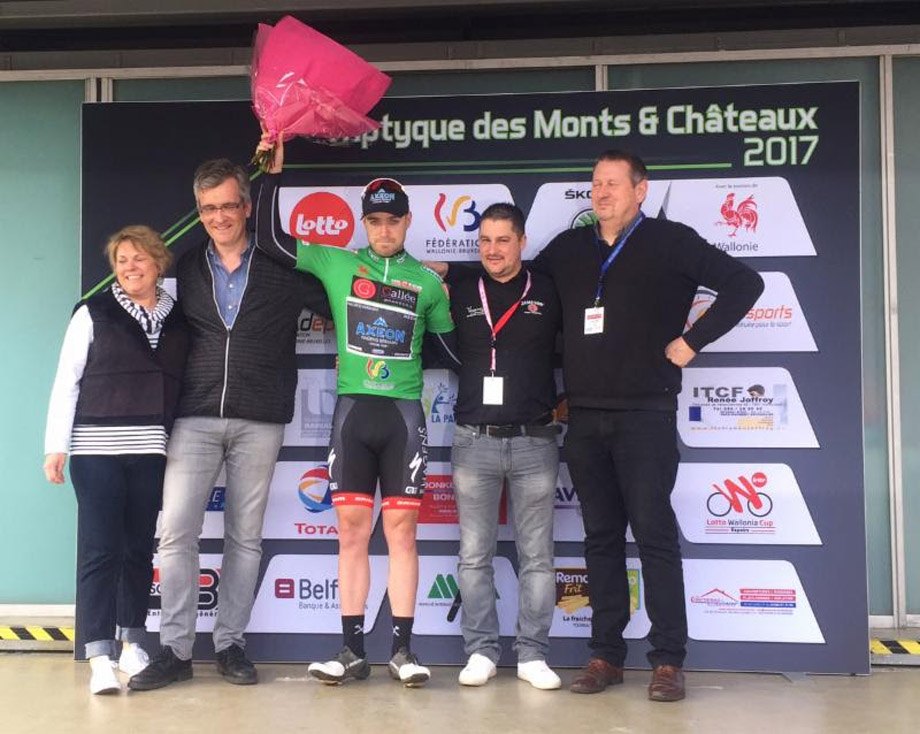