Michael Rice scored the Axeon Hagens Berman Cycling Team’s first road victory in the United States this season with his win Sunday in the final stage criterium of the San Dimas Stage Race. 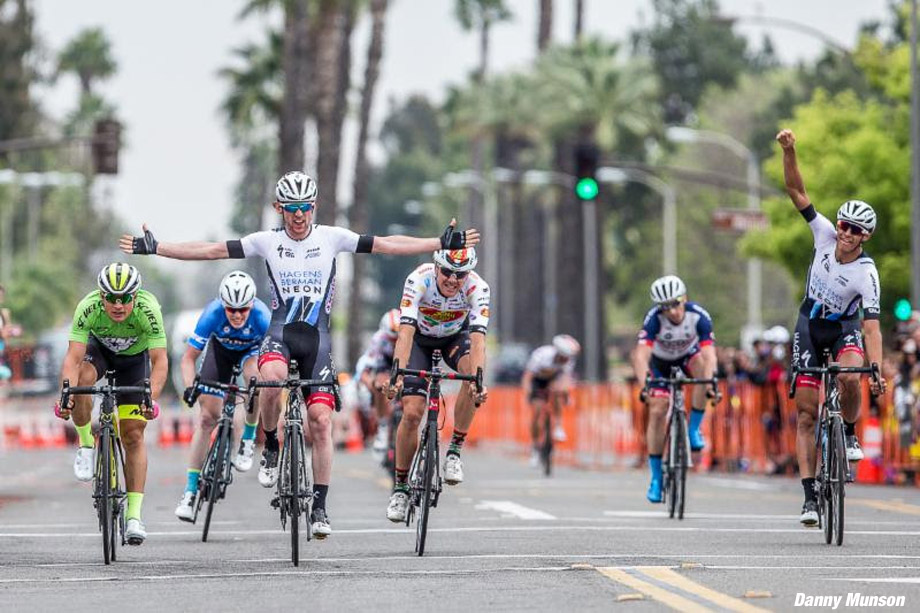 The 21-year-old Australian denied Robin Carpenter (Holowesko Citadel presented by Hincapie) a second straight stage win by taking advantage of a well-executed lead out by teammate Christopher Blevins in the sprint into a strong headwind. The pair was part of an eight-man breakaway that escaped in the last 12 laps of the 85-minute criterium.

“Christopher did a perfect lead out and I was able to hold on for the win,” Rice said. “When it became obvious we would survive to the finish, I made the call to have him keep working on the front. I was able to sit back and save my legs for the final sprint.”

Blevins, winner of the Specialized Cactus Cup mountain bike race two weeks ago and a veteran of the San Dimas Stage Race, said he had a serious flashback coming into the final lap of the USA Cycling American Road Calendar event.

“Three years ago, I was racing in the juniors and wearing the yellow jersey here and leading out one of my teammates for the win on this very course,” the 19-year-old from Durango, Colorado, said. “So I had some practice doing it. Michael and I both knew it was crucial for us to be first and second into that last corner. So I drilled it into the last corner and started sprinting out of it. He had plenty of space and was able to easily come around me.”

The breakaway’s 36-second advantage at the finish shuffled the top of the overall standings. Overnight race leader Kyle Murphy (Cylance Pro Cycling) did not make the breakaway and fell to fourth overall. Conner Brown (Elevate-KHS Pro Cycling) took the overall title ahead of two others in the breakaway, Jordan Cheyne (Jelly Belly presented by Maxxis) and Carpenter. Rice finished fifth overall, 38 seconds back of Brown, and Blevins was sixth, at 44 seconds.

Blevins, who finished fourth in the sprint, initiated the pivotal escape move after his Axeon Hagens Berman teammate, Rui Oliveira, had been part of a three-man breakaway for much of the race.

“The team in second place (Elevate-KHS) was chasing hard to bring it back and when it came back, I knew it was a great time to counter,” Blevins said. “So I went off and one of the Elevate-KHS guys bridged up, followed by two riders from Jelly Belly and Carpenter. So that was a lot of firepower and we were able to make it stick.”

Rice’s third straight finish in the top 10 in the three-day race came as a result of a mix of three veterans and four newcomers. He and Blevins, along with Edward Anderson and Oliveira are in their first year on Axel Merckx’s development team. They joined returnees Jonny Brown, reigning U.S. national road and time trial champion Geoffrey Curran and Chad Young.

“Obviously today went very well for us,” Rice said. “We worked well as a team and stuck to our plan by having Rui in the breakaway and then our guys for the general classification in the move that really counted. We definitely got the job done.”