RusVelo rider Ivan Balykin won the inaugural edition of 1.2 Maykop-Uliap-Maykop, beating Timofey Kritskiy (Russian national team) in a two-man sprint. Balykin’s teammate Roman Maikin rounded off the podium. On a predominantly flat 171 km-long course the race was decided in a bunch of 24, five RusVelo riders among them.

“The wind was not even half as strong as it was forecast, but we didn’t back down over the plan to tire out our rivals, sprinters and their lead-out men in particular. I saw determination in the eyes of the guys before the start, and they made this race really hard; I’m happy with the way they fully controlled the race. The luck was not always on our side, Andrey Solomennikov punctured in a final couple of kilometers, Alexander Komin fell pretty hard and broke the bike; still both riders are OK and motivated to show what they are capable of in the stage race that starts tomorrow”.

“I’m happy to open my winning score this season, but it’s also the way we worked as a team that gives me even more reason to enjoy it. We played with two tactical schemes: to let a controllable escape go or to destroy the field by dictating the hard pace at the front. Although the wind was not that strong, the peloton started to break into echelons; then a large group bridged the gap. 15 km to go we gave yet another hard pull so that the front group thinned out to about 23-25 guys. Timofey Kritskiy attacked with some 700 meters to the line, there were two wet turns on this stretch. I was the only one who hanged on to his wheel, and then I managed to outsprint my former teammate. We also need to give Roman his due, he beat a strong sprinter Sergey Nikolaev from Itera-Katusha. It’s my turn to help others now that RusVelo climbers will hunt for the general classification of the Tour of Adygeya”. 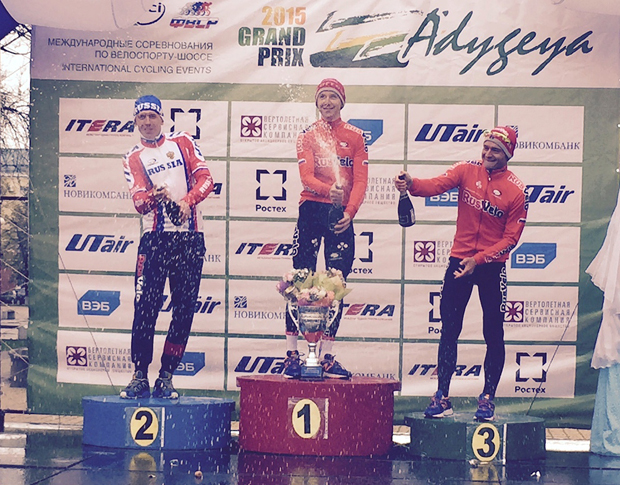