It couldn’t have been closer or more exciting end to the second stage of the International Bayern Rundfahrt (May 22-26 / UCI 2.HC). Milan-San Remo winner Gerald Ciolek of Team MTN-Qhubeka p/b Samsung was beaten into second place by South African Daryl Impey (Orica-GreenEdge) in a photo-finish. Third on the difficult Queen Stage over 199.6 kilometers was Adriano Malori (Lampre Merida). The result for Africa’s first Professional Continental team comes after Ciolek’s fourth place on the opening stage yesterday.

“I am of course very happy with second place on this extremely difficult stage. Because of my cold, I couldn’t prepare myself right, but it is going better than I expected,“ said a satisfied Ciolek. “In the end we really had to work hard in order to get back to the head of the field. So at the finale I was missing a little bit of strength. Tomorrow we will attack again.“

“Gerald Ciolek put in a really great performance. As a sprinter, to come over four difficult climbs and then be second in the sprint is simply fantastic,“ said sports director Jens Zemke. “In the finale it didn’t look good for us at first. There were 15 men up front with a 30 second gap and we only had Gerald and Sergio Pardilla in the chase group, but in the end it worked out well for us and a large group came together to the finish.“

The Queen Stage of the Bayern Rundfahrt challenged the international roster of starters on the second day. After a hectic start, a nine-man group formed which led the way until the difficult climb of Sankt Englmar. The peloton split as the stage continued on the difficult climbs, and near the end a 60-man group was at the lead. Before the first crossing of the finish line, 13 riders got away and built up a dangerous lead of 30 seconds but the chasers set to work and caught them in the last lap of the circuit course.

Friday’s third stage runs 196.8 kilometers from Viechtach to Kelheim. Although the profile of the stage resembles a saw blade, it is expected to end again in a mass sprint.
The 34th Bayern Rundfahrt runs over five stages and 785,4 kilometers from Pfaffenhofen an der Ilm in the Hallertau over the Bavarian forest to Nürnberg. 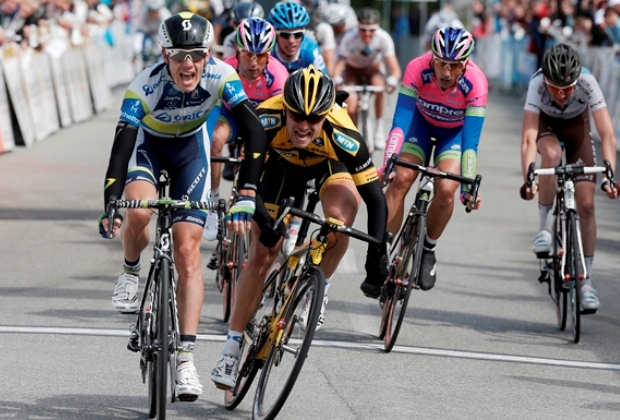